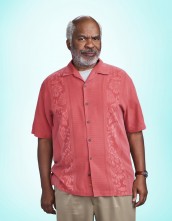 The actor also recalls his work on THE WIZ LIVE! 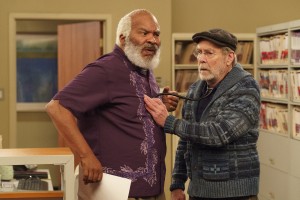 Grier, originally from Detroit, Michigan, studied Shakespeare at Yale. He has done his share of drama (he played Jackie Robinson in the musical THE FIRST on Broadway and can currently be seen in the new HBO movie NATIVE SON), but he’s probably better known for his comedy work. Grier was part of the original IN LIVING COLOR, and has since been a regular on LIFE WITH BONNIE, BAD TEACHER, and THE CARMICHAEL SHOW. Grier won an Image Award for his performance as the Cowardly Lion in NBC’s production of the musical THE WIZ LIVE!

ASSIGNMENT X: Do you have a preference for humor that’s broader and sillier, like THE COOL KIDS, or the more topical stuff you were doing on THE CARMICHAEL SHOW?

DAVID ALAN GRIER: I like the variety of work. This is definitely a different kind of show than THE CARMICHAEL SHOW, and we’ll see. We’ll see how deep it goes. I don’t know that we’ll ever do a Black Lives Matter episode [laughs], not that I wouldn’t be down with it, but we’ll see.

AX: Not every style of humor works on every series …

GRIER: There is no joke that everybody’s going to get. Because when you do that, that’s not good television. I did a show and there was a joke about sushi. This was years ago. And the network came down and said, “We’ve got to cut this joke about the sushi.” And I’m like, “Why?” “The flyover states. They don’t eat sushi.” Food Network, I was going to do a show – “You can only do pork, beef, maybe chicken. That’s it.”

AX: You’re serious about cooking, you had a food blog, the Chocolate Glutton …

GRIER: It’s really a serious geeky passion, and that’s my outlet, so I just do that.

AX: Have there been any jokes where you’ve gone, “I don’t think this is funny”?

GRIER: Yes. But that’s the process of rehearsal and just saying, “I don’t like this.” Usually as comics, we’re coming up with our own stuff. There’s an open dialogue. No, I’ve never been in my room like, “I was made to say this horrible thing.” I don’t know how other actors deal with it, but that’s what I do. I just say, “I can’t do this.”

AX: Do they let you suggest any lines?

GRIER: Yeah. I think I’ve been heard. Nobody’s fought me tooth and nail for any joke they think is funny. That hasn’t happened. So I think I’m being heard.

AX: Can you talk about the difference in comedic styles of you and your costars on THE COOL KIDS?

GRIER: I like being in a room with different voices. Our working ethics are the same, and that’s really what bonds us. The other stuff will come, but if everybody came at the work process with some crazy, different point of view, that would be more difficult to overcome.

AX: Is anyone more physical than the others?

GRIER: I’m going to say Leslie is the most physical. But the rest, you see their personalities. Personality difference really what it is.

AX: Did you know any of them before you started doing THE COOL KIDS?

GRIER: I didn’t know any of these people [socially], but I met Martin Mull when I was with my girlfriend in high school. He was performing in Detroit at the Pickford Chevy Hotel. He came to this little café, and I wrote a note to him on our napkin, and he came over and talked to us, and I was like, “Oh, my God, this guy is great.” So we reconnected when I was hosting something, and I told him that story, and he said, “Oh, my God.” So then I rediscover him again as a fine artist, a painter, and I own some of his work, and all that’s married into working. So that’s a long, tangled path, but it’s really fun. It’s a joy to work with him.

AX: Do you see any benefits to living in a retirement community, or is it something where you’d go, “Aggh, no privacy! No!”?

GRIER: The money – you give me a cheap situation – that has to be it. But every old person I know in my family, they’re trying to stay where they are. None of them are like, “Oh, I’m eighty-five! Let’s go [to a retirement home]!” No.

AX: With a TV show schedule, do you like getting to burst out and do something else like THE WIZ LIVE! occasionally?

GRIER: Yes, of course. I mean, it was a unique experience, too, because I never had done anything like that, and it was right in the pocket [between seasons of THE CARMICHAEL SHOW, which like THE WIZ LIVE! was on NBC]. Because when I heard when THE WIZ was announced, I really wanted to do it, so I was talking with NBC and my managers. I hadn’t gotten the part, but, “Is this possible?” And initially, they said, “No, you’re doing THE CARMICHAEL SHOW, we want you here, we’re not going to let you out to do something else.” Then I was devastated. Then it just worked out. We finished our order right in time, and I was cast in it, I got to do it, and then come immediately back to work. So it was just one of those times when it worked out.

AX: Looking back at THE WIZ, do you have any thoughts about that experience and whether you’d do something like that again?

GRIER: I’m really proud of the work that we did. It’s one of the most special things I’ve ever done, just because the emails and the messages from grown women, men, little kids – the most touching were probably grown women, a lot of women of color, who said that them seeing THE WIZ for the first time was the first time [they’d seen] this little black girl at the center of the story, and how it shaped their lives, how they’re grown now, some of them are moms, watching with their young daughters, and reliving it as children again. That’s happy, man. I was totally humbled by stuff like that, or just by people that would stop me in the street. So it was one of those kinds of roles. So I think back, and I love it. I don’t regret anything. No, there’s not a point where I go, “Oh, I blew that note!” But I’ll tell you one thing. As we were doing it that night, I kept going, “This chair needs to be closer tomorrow, this guy has to be downstage …” And then I realized, there’s no tomorrow, this is it. But as an actor, my process was, I’m going to crack this, this, and this. Yeah, but you only got one shot.

AX: Is there a show that you’d like to do as another live TV musical?

GRIER: I don’t have a dream project that I’m sitting on, but I like it. As long as the rehearsal process is long, it gives you enough time. That was my first question actually, was, how long is the rehearsal process? Because I did not know. They said [approximately] a month. I was like, “Oh, thank God, okay, great.” Because then you can relax and really do the work.

AX: And what would you most like people to know about THE COOL KIDS?

GRIER: I think that it’s really funny. It would be great to get a show that everybody could watch and laugh together at. As a performer and artist, I just try to do my best and go for what I think is going to resonate the most. In terms of comedy, I hope we’re that. Come on. Watch us.