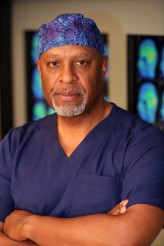 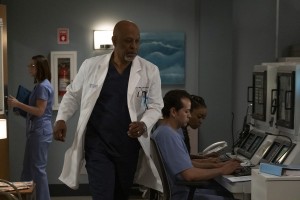 ABC’s stalwart medical drama GREY’S ANATOMY, on Thursday nights, is now in its fifteenth season and renewed for a sixteenth. Many cast members have come and gone from the Shonda Rhimes-created hit (Patrick Dempsey, Sandra Oh, Sara Ramirez), but James Pickens Jr., who plays Dr. Richard Webber, has been with the series for its entire run, acting in all but one of its (so far) 343 episodes and counting.

Pickens, originally from Cleveland, Ohio, went to New York to begin his professional acting career. He starred in the Negro Ensemble Company’s production of A SOLDIER’S PLAY alongside Samuel L. Jackson and Denzel Washington. Pickens’s first film appearance was in the 1986 thriller. Since then, he’s appeared in series and films including the original BEVERLY HILLS 90210, TRESPASS, HOW STELLA GOT HER GROOVE BACK, THE PRACTICE, ROSEANNE, 42 and THE X-FILES (both original and recent).

GREY’S ANATOMY is as spoiler-phobic as most serialized dramas, so details about the season finale are off limits, but Pickens sits down outdoors for a brief chat about the longevity of his residency at Seattle Grace Hospital.

ASSIGNMENT X: Did you expect that GREY’S ANATOMY was going to last this long, or that you were going to work this long on it?

JAMES PICKENS JR.: No. No way. Never. We actors are transient at best. To be able to be stationary this long – not only that, but on a show that’s had the impact it’s had socially, culturally – it’s been pretty amazing.

AX: You’ve been on it since the beginning …

PICKENS: I’ve been fortunate enough to be on it since Day 1.

AX: What have been some of the bigger surprises for you since then, in story terms? Finding out that Richard had a daughter, Maggie [played by Kelly McCreary] with Kate Burton’s character Dr. Ellis Grey, who’s the mother of Ellen Pompeo’s Meredith Grey, was that one of the more startling developments?

PICKENS: Oh, yeah, that discovery of that, and also, his own fault, and ups and downs through the years, and losing his wife Adele [played by Loretta Devine], but then discovering his new life with Catherine [the doctor played by Debbie Allen], and his relationship with Maggie, and also with Jackson [Catherine’s doctor son, played by Jesse Williams] – it’s been a lot of fun.

AX: Were there any things you wish you had known before they came up in the script in order to have maybe played earlier episodes differently?

PICKENS: I don’t know how most actors work, but I like being surprised, I like the spontaneity of it all, and seeing it all just unfold from the scripts. So if I’ve been surprised, it’s been pleasantly surprised, and I use it in my process of the character.

AX: Do you get time off to do stage or film?

PICKENS: I do get time off. We have a hiatus. I’d love to go back to New York to the theatre. There have been some inquiries, but the time is just not enough, I don’t have enough of a commitment, but I’d love to do that. I’ve been able to do some features over the years, and some other TV things aside from GREY’S, so that’s kept my plate pretty full. 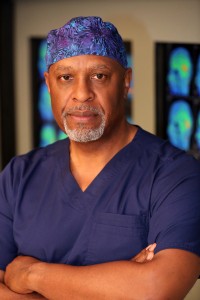 AX: Has anything surprised you about GREY’S ANATOMY overall?

PICKENS: That folks are still watching. That’s probably the biggest surprise [laughs]. But it’s a testament to Shonda Rhimes, and that world that she has created. Fifteen seasons down the line, we’ve been discovered by a whole new audience, thanks to Netflix. Those viewers who were not born, or too young to watch the show, now are our biggest and most avid fans. So it’s been pretty incredible.

AX: What are you most looking forward to in Season 16 of GREY’S ANATOMY?

PICKENS: Oh, wow. It’s hard to say. We’ve touched just about everything, so I guess what I’m most looking forward to is to see what they come up with. That’s going to be the adventure of it.