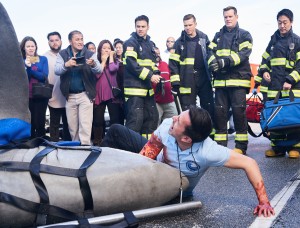 9-1-1, Fox Networks’ Los Angeles-based first-responder drama, now in its second season on Monday nights, has just been renewed for a third season. Executive producer/show runner Tim Minear, who co-created 9-1-1 with Ryan Murphy and Brad Falchuk (he also works as a writer/executive producer/director on their AMERICAN HORROR STORY for FX), talks Season 2 at both a Q&A panel and a small follow-up discussion.

ASSIGNMENT X: What percentage of the incidents you depict on 9-1-1 are taken from real life?

TIM MINEAR: A lot of our cases are real. In fact, the ones that probably you think, “Well, that never happened” are probably the ones that did happen. Even all the way back to the pilot, a [live] baby being flushed down some plumbing, that was a real thing. A bouncy house flying a hundred feet into the air, that was a real thing. So we look to stories from real life. We originally started looking to YouTube a lot, because the whole feeling, our sort of aesthetic for the show is, it’s not a plotty procedural. There are incidents, and we want it to feel like the experience of getting onto YouTube and watching a compilation of ultimate fails. You keep clicking and going down that rabbit hole, because you want to see the next cool thing. So that’s the experience that we’re creating for network television on a scaffolding of amazing, emotional character stories.

AX: Do you have consultants who are part of the real-world first responder community?

MINEAR: We were actually contacted by the L.A.F.D. [Los Angeles Fire Department] chief after the show started airing last year, and they asked to meet with us, and we did. Representatives from the show and from the studio met with them, and they have hooked us up with amazing consultants. They are there for any questions that we have. They really want to make sure that we get it right. We want to make sure that we get it right, and so there’s actually a lot of interaction between the L.A.F.D. and our show now, which has just made everything better. We revere those people, and we just want to do right by them.

MINEAR: That’s actually how it works in my head. It’s a big ensemble. I think everyone on the show is a star. So I think you just sort of have to feel your way through the balance. Since they are all stars, you can shift the focus week to week, and play some characters more heavily than others. What’s interesting about this group is it’s not just that they are all stars, but every different combination gives you a slightly different story to tell, or a different perspective. And I just love to see characters that maybe we haven’t seen a lot together on screen start to get together on screen and see just what happens.

AX: Speaking of characters getting together, at the end of Season 1, and on into this season, there’s been a romantic relationship between Angela Bassett’s police officer character Athena and Peter Krause’s fire chief Bobby. Was that romance always in the cards, or did you realize once you were underway, “Gee, we have these two really hot lead characters who are single, and something should happen here”?

MINEAR: I think making any television show, except something that’s maybe completely plotted out, I’m sure even with GAME OF THRONES or something, it’s an organic process, and you go where the story leads you on some level. I do remember that, when we were writing the first half of the first season, there was a moment when Abby [played by Connie Britton] first comes into the firehouse, where Bobby sees her, and he doesn’t quite know who she is yet. And I knew that the audience would be, “Oh, they’re going to end up together.” So as soon as we established that, I knew they weren’t, and I knew there was a more interesting direction to go. And no, we didn’t plan [the Athena/Bobby relationship] at the beginning, but it was a sort of natural, organic thing that happened because of where those two characters were. And when you see them sitting in that church together, and you realize they can understand each other in a way that no one else could, it just made sense.

AX: In Season 1, Kenneth Choi’s character Chimney got a piece of rebar through his head in a car accident, and wound up back at work before the season ended. Is that kind of recovery from that kind of injury actually possible?

MINEAR: As a matter of fact, when we produced that story, there was a guy in South America, a piece of rebar actually fell from a great height, but it went through his skull in exactly the same way that we put it through Chimney’s skull. They pulled it out, and he was back to work in two weeks. He didn’t really have any brain damage. It didn’t go through any part of his brain that affected speech or cognitive function. So we made sure to show something that had already happened, so that you could buy the fact that Ken is going to come back and be part of the show, without it being a thing that’s going to affect everything he does from now on.

AX: Have you had any censorship issues with things you wanted to show?

MINEAR: I used Sean Maher last year, from FIREFLY [Minear was an executive producer/writer on that series], in a scene where a seven-foot tapeworm came out of a guy’s as*. So apparently that was okay [laughs].

AX: You were a writer/director/producer on FX’s FEUD, about Joan Crawford and Bette Davis. How did that come about?

MINEAR: That was Ryan [Murphy]’s idea. He had optioned a screenplay called BEST ACTRESS that focused on the battle for the Oscar, between Bette and Joan. So he optioned that, and then we built out the show based on that screenplay.

AX: If FEUD continues, are there any other showbiz stories you’d like that series to tackle?

AX: Are you looking at your fondness for ‘20s Hollywood, or indeed, your enthusiasm for anything else, as a source of 9-1-1 stories?

AX: How are you dividing your time? Are you on 9-1-1 full-time now, or are you still on AMERICAN HORROR STORY as well?

MINEAR: That we will be continuing with the thrills, and deepening the emotional relationships, and more surprises to come.