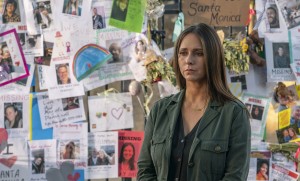 Fox’s first responder drama 9-1-1 is now in its third season on Monday nights. Jennifer Love Hewitt joined the series in its second season as Maddie Kendall, sister of firefighter Evan “Buck” Buckley. Maddie, a former nurse, initially comes to Los Angeles to get away from her abusive husband (played by Hewitt’s real-life spouse, Brian Hallisay), but soon finds a job as an emergency services call center operator.

Maddie had an eventful year. Besides becoming involved with Buck’s colleague, paramedic Howey “Chimney” Chan, played by Kenneth Choi, Maddie was stalked and kidnapped by her vengeful ex; she winds up having to kill him in self-defense.

This season, Maddie is involved in an arc where she takes it upon herself to investigate what seems to be a series of 9-1-1 calls from a battered woman who is unable to speak for herself.

Hewitt, originally from Texas, first became known for her role in the Fox drama PARTY OF FIVE, then got her own spin-off, TIME OF YOUR LIFE. She then starred in the five-season run of GHOST WHISPERER as spirit communicator Melinda Gordon, was nominated for a Golden Globe for her work in the telefilm THE CLIENT LIST, which then became a series, and spent a season on CRIMINAL MINDS. Hewitt also toplined the horror film I KNOW WHAT YOU DID LAST SUMMER and its sequel, and appeared opposite Jackie Chan in THE TUXEDO. 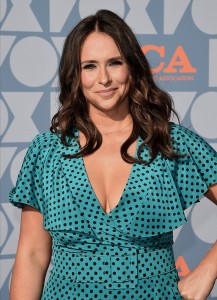 ASSIGNMENT X: When you were initially cast as Maddie in 9-1-1, did you have to have to do any research in order to play either a nurse or a 9-1-1 operator?

JENNIFER LOVE HEWITT: A more skilled actor probably would have [laughs]. I did not. I got the job very quickly, went to work very quickly, and just sort of leaned on everybody that had been there before me to help me understand what it was that I was going to do, and then very quickly kind of made it my own.

AX: Did they tell you that they planned for Maddie to get together with Chimney, or was that something that you found out later?

HEWITT: No. It was one of the very first conversations I had with [9-1-1 co-creator/show runner] Tim [Minear], and I was like, “I have a really weird thought, but I think Maddie should date Chimney on the show.” And he was like, “Oh, you know what? Yeah, she should do that.” And it just seems like two very sweet people who had been through a lot of really rough things, and deserved some sunshine.

AX: You had a Maddie-centric episode that was unlike most of the other episodes in that it was primarily just the plotline of Maddie trying to escape from her ex-husband in the snow, and having to bash him over the head. Is that the most physical thing you’ve done in awhile?

HEWITT: It is the most. Besides [giving birth] labor, yes [laughs].

HEWITT: In acting, for sure. It was really fun, though.

AX: Did you have to prepare for those fight sequences, or did you just work with the stunt coordinator on the day?

HEWITT: We kind of worked on the day as we went with things, to figure out what felt best. The main thing was that it didn’t and shouldn’t have felt like a stunt, it should have felt like a real woman who was fighting for her life. So we played around with just trying to make it as real as possible.

AX: With that storyline, did you feel any ambivalence about saying, “Well, maybe the only way to deal with an abusive ex is for her to kill him”?

HEWITT: [laughs] I was surprised that that’s where we went with it, but I did feel when we got there that it was important. 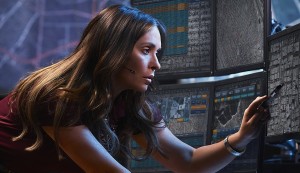 AX: 9-1-1 shoots primarily in Los Angeles, but you shot those scenes in the middle of a drought in Southern California. Where did you find a location that had snow?

HEWITT: Big Bear. There was actually snow. We had to drive very far, and very high, but we found snow.

AX: When you’re doing scenes when Maddie is taking 9-1-1 calls, do they have somebody off-camera reading the other person on the call for you?

HEWITT: Yes. A lot of the times, it’s my stand-in, Michelle. Sometimes it’s the actor [playing the character making the call]. If they’ve auditioned somebody, and they’ve gotten the part, they’ll send them over to the soundstage, and they’ll read it off-camera for me. But most of the time, it’s somebody actually in my ear, reading along.

AX: Has anybody ever pranked you while you’re doing that?

AX: We know you can’t spoil anything for Season 3, but do you have any favorite scenes or sequences that you’ve done from 9-1-1 Season 2?

HEWITT: I really enjoyed Maddie’s storyline in the snow. It was very important to who she is. So I would definitely say that was probably one, and then I really enjoyed doing karaoke with Kenny’s character.

AX: Going into Season 3, it seems like that Maddie/Chimney relationship is back on …

HEWITT: It is back on, yes. It is finding its way.

AX: Do you have any other projects going on right now, apart from real-life parenthood?

HEWITT: No, this is keeping me very busy. Parenthood and 9-1-1, that’s about it.

AX: How old will your children have to be before you let them watch the show?

HEWITT: Oh, it will not disappoint. We start loud and proud, and we continue that way.