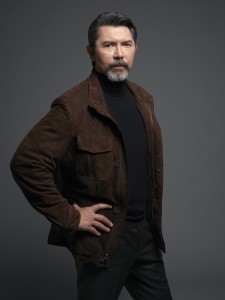 Fox’s PRODIGAL SON, in its first season on Monday nights, has just received a full-season pickup. Malcolm Bright (Tom Payne), a profiler consultant to an NYPD homicide task force, is the son of notorious, incarcerated serial killer Martin Whitley (Michael Sheen). Lou Diamond Phillips plays Malcolm’s boss, NYPD Lieutenant Gil Arroyo, who arrested Martin when Malcolm was a boy and has served as the young man’s surrogate father ever since.

Phillips, born in Subic Bay in the Philippines, has played plenty of law enforcement characters, and pretty much every other type of character, in films and television over a career that spans approximately forty years and, per IMDB, 145 roles so far. His breakout role was in 1987’s LA BAMBA as rocker Ritchie Valens. He has shown off his singing skills thereafter, including in his Tony-nominated performance in the 1996 Broadway revival of THE KING AND I. Phillips spent six seasons on the contemporary Western TV series LONGMIRE as tribal liaison Henry Standing Bear and has a recurring role on BLUE BLOODS. Phillips has also just sold his first novel, a science-fiction tome, for publication.

ASSIGNMENT X: Were you more intrigued by the premise of PRODIGAL SON, or were you more specifically interested your character?

LOU DIAMOND PHILLIPS: I think I’ve gotten to the point in my career where it’s not just about the character alone. I think that everything has to work, and that is the premise, the writing, the rest of the cast. And this one just felt right from the beginning. I didn’t do a pilot last year, I didn’t see anything that was that interesting, and I’m always a little askance when I hear, “Okay, it’s going to be a procedural.” But this one really was a fresh take on the tried and true, and that I found to be very refreshing and very exciting, because there’s something to do every time you go into work, and I appreciate that. I’m not just doing the shoe-leather work all the time.

AX: Can you contrast the lieutenant’s attitude towards law enforcement and the way he deals with his staff with Henry Standing Bear’s approach to law enforcement?

PHILLIPS: Well, that’s interesting, because Henry was not in law enforcement. His best friend Longmire was the sheriff.

AX: But Henry had a big paw in how things were handled …

PHILLIPS: Yes, because he was the liaison to the reservation, and so he always was looking to protect the rights of his people, above and beyond what the white man’s law might say. And what I have here [in PRODIGAL SON] is a lifelong cop, who starts out as a beat cop. He’s worked his way up. He’s always been in law enforcement. He has not gotten jaded, still is not crooked in any sense of the word, and he’s a papa bear. In comparison to Henry Standing Bear, he’s a papa bear, because I think he has handpicked his team, and handpicks Malcolm Bright, and brings him on, and is willing to protect him and his particular idiosyncrasies.

AX: Is there a reason that Arroyo’s main team members, at least the ones we’ve seen so far, are all a bit younger?

PHILLIPS: I don’t know. There’s not one that’s articulated. I think that he has certainly picked people with stamina, people that are representative of their communities, and put together what would be an atypical team to deal with atypical crimes.

AX: Does the lieutenant deal much with Michael Sheen’s character of jailed serial killer Martin Whitly?

PHILLIPS: That is yet to be seen. I think that potential exists. There has been some interaction at this point – I can’t really talk about what that is, but I think that there will be much more in the future. 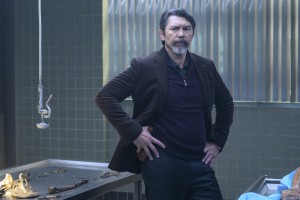 AX: As an actor, do you have fun playing opposite Michael Sheen?

PHILLIPS: Oh, I have fun playing opposite this entire cast. Michael is obviously theatre-trained, and has had a stellar career, so it’s exciting to see him play this role, and to look for those times when our paths are going to cross in the future. But the entire cast brings individual talents to the table, and it’s great working with all of them.

AX: At this point in your career, have you played enough law enforcement people that you know everything you need to know, or did you have to do any research to play Gil Arroyo?

PHILLIPS: I definitely do not know everything, but yeah, I’ve played a lot of cops, and a lot of different kinds of cops. I’ve played beat cops, like on SOUTHLAND. I’ve played detectives. I’ve played Federal guys, and specialists from Quantico, in television and in film. So it’s been fun to bring a lot of this baggage to the character, much like Gil has himself.

PHILLIPS: The writing staff on LONGMIRE was fantastic, absolutely wonderful. But they certainly had firm reins on what was going on. Chris and Sam have this amazing ability to steer the ship, and yet take suggestions. They’re so accessible, they’re so open, so laid back. The subsequent scripts have just improved upon the pilot, and they have been so open to taking suggestions, and to feedback on individual lines, on the script, on plots. It’s been fantastic.

AX: When you get the scripts, do you get to the crime and go, “Okay, who do I think this and why?”, or do you just keep reading to find out?

PHILLIPS: For the first time in, God, almost forty years of doing this, my wife Yvonne and I have made a wonderful little tradition of reading the scripts aloud. She’s so excited, she loves this show so much, that I read the scripts to her. And I’ve got to admit, sometimes you don’t know which way they’re going, you don’t know how the crime is going to be solved, or you don’t know what little twist is going to happen with the characters. So it’s been very exciting to read every single one of them.

AX: How is shooting in New York?

PHILLIPS: I love it. I am so thrilled. The last time I lived in New York for any length of time was when I was doing THE KING AND I on Broadway, and I’m still very close to a lot of that cast and a lot of those crew people. As a matter of fact, my hairdresser from that helped me to find the broker who found my apartment that I’m living in now, and my wife loves the city, my eleven-year-old is there, and it’s such a lovely new chapter in my life. And so to add that to the journey, and to consider myself a New Yorker for the time being, it’s great.

PHILLIPS: Oh, my goodness. In New York, [there was] a film festival screening of a movie I did called QUEST, which is really a lovely film. I play a despicable, disgusting character in that, an abusive stepfather. I also have an independent film that I have not seen yet, called ADVERSE, with Thomas Ian Nichols, Penelope Ann Miller, Mickey Rourke, Sean Astin, another little indie film that’s a lot of fun. And I also guest-host an episode of BEAT BOBBY FLAY, which is a blast, so yeah, back to my cooking roots.

PHILLIPS: PRODIGAL SON is exciting, and edgy, and interesting, and will be massively entertaining.