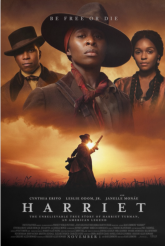 Worthy and respectful, but a little stiff 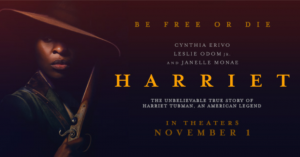 Harriet Tubman is a real-world hero. Born into slavery as Araminta “Minty” Ross (later taking her mother’s first name of Harriet and keeping her married name Tubman), she first escaped from the Maryland plantation in her twenties where she was being held 1849, then made it on foot, alone, one hundred miles to Philadelphia. Shortly thereafter, Harriet made multiple return journeys as a “conductor” on the Underground Railroad to personally guide seventy-five people out of the states where slavery was legal, teaching others to conduct on the Railroad themselves and inspiring still more to flee bondage.

Tubman’s is clearly a story worth telling, and indeed, it has been told numerous times before, in many mediums. The feature film HARRIET is the latest iteration. Directed by Kasi Lemmons from a screenplay Lemmons wrote with Gregory Allen Howard, based on Howard’s story, HARRIET is an immensely respectful account. It’s easy to see that the filmmakers may have felt themselves in a bit of a predicament. On the one hand, Harriet Tubman is not the sort of figure most people would want to ever show in a bad light. On the other hand, a main character with no character flaws can seem a little simplistic. The filmmakers don’t find a middle way through this, and opt for the latter.

On the other hand, Lemmons has a beautiful sense of the period. She is also able to convey the terrors and indignities of the “peculiar institution” sufficiently for even young viewers to understand why slavery was such a horrible, prolonged injustice, without making it so harrowing that children shouldn’t watch. 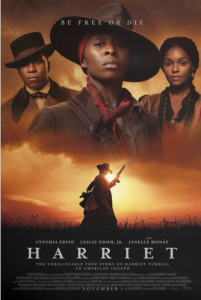 Harriet, played with heart and certainty by Cynthia Erivo, therefore starts as an innocent who has suffered from fainting spells that began after she was hit in the head with an iron weight. This happened to the real Tubman, as did her conviction that she thereafter had visions and premonitions sent by God. However, in HARRIET, the premonitions and visions are presented as incontrovertibly real, as we see what Harriet sees prior to actual events. This isn’t necessarily a bad thing – a movie needs its own personality and point of view – but it never quite integrates into the rest of the presentation.

Once Harriet makes it out of the slave states and decides on her path, Erivo’s performance grows deeper and more fully inhabited. There are too many real incidents in Tubman’s life to fit coherently into a two-hour running time. The filmmakers have therefore decided on a narrative structure that represents certain themes, and the story is never dull, but, for example, the ongoing conflict between Tubman and the white man (Joe Alwyn) who believes he owns her feels sort of beside the point. This isn’t the fault of either actor, but trying to maneuver them into scenes together takes up valuable screen time.

Leslie Odom Jr., as a black official of the Railroad, and Janelle Monae, as a boarding house proprietor who befriends Harriet, both make strong impressions. So does the rendition by Tony Award winner Erivo of HARRIET’s closing-credits song.

We come out of HARRIET feeling like we’ve seen something important that we ought to have seen. But we don’t feel like we’ve lived through it alongside any of its people, and it seems like that should have been part of the experience.