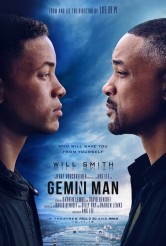 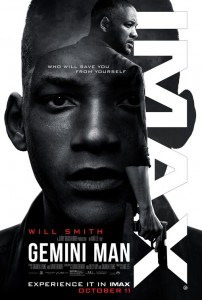 GEMINI MAN is shot at 120 frames per second, rather than the conventional 24 frames per second. When Peter Jackson tried something like this, at 48 frames a second for 2012’s THE HOBBIT: AN UNEXPECTED JOURNEY, it gave the movie an unfortunate videotape look. However, the technology has clearly improved hugely since then.

The combination of the 120 frames per second frame rate with a process called 4K 3D allows GEMINI MAN to boast what is arguably the best use of 3D since AVATAR. It’s not that things are continually launched over the edge of the frame (though those water droplets hanging in midair are impressive), but rather than director Ang Lee employs the effect to explore actors’ faces. We can see into their eyes the way we can normally see the expression of a person sitting a few inches away from us. What this does for the performances is provide an intimacy that conventional close-ups do not. The technique is startling, even before we reckon with what happens during chase and action sequences, where we experience our own forward momentum. Further, this new process, unlike most previous 3D, doesn’t darken the images or desaturate colors. Everything is as bright as it ought to be.

Then there are the visual effects that have Will Smith, who also stars as fifty-one-year-old Henry Brogan, playing twenty-three-year-old Junior. There’s no weird texture to his skin, no uncanny valley in the eyes. Smith now looks like the Smith of yesteryear, and the only.reason we know that visual effects are involved is because we’re aware that it’s been a few decades since Smith really looked like that.

This makes it all the more disappointing to report that the screenplay for GEMINI MAN, by David Benioff and Billy Ray and Darren Lemke, from a story by Lemke and Benioff, is pretty standard science-fiction fare. It’s moderately entertaining, but neither director Lee’s visual pizzazz nor the commitment of the actors can keep the story from being predictable and feeling familiar.

Smith’s Henry is entirely committed to both characters that he plays. Henry is an expert government assassin who is on the verge of retirement. Killing people is taking more out of him than he feels he can afford to lose anymore. We see Henry’s old commander Clay Verris (Clive Owen) arguing with spymaster Janet Lassiter (Linda Emond) about whether or not to deploy “Gemini” on U.S. soil. 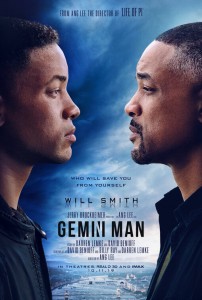 Henry is alerted to the possibility that he had been lied to about the nature of his last target. Before he can even try to investigate, Henry has to thwart a kill team that’s sent after him. Henry escapes, with the help of bewildered but capable government agent Danielle “Danny” Zakarewski (Mary Elizabeth Winstead). As the kill team has failed, Verris sends his best assassin after Henry.

Out of consideration for anyone reading this review who hasn’t seen the trailers or read the one-line blurb on GEMINI MAN’s IMDB page, the nature of the assassin won’t be revealed here. However, there’s some reinventing the wheel in the way the film approaches its major plot engine. This would be less bothersome if GEMINI MAN had anything new to say on the subject, but instead, it bends itself into pretzels trying to justify exactly why all of this is happening. However its story was actually created, it plays like the writers were asked to craft a premise that would accommodate the effects, rather than writing it because they had themes they wanted to explore. (The contradictory logic regarding nature vs. nurture is enough to induce a headache.)

GEMINI MAN is a movie that cries out to be seen on a big screen in 3D in a movie theatre by anybody who is interested in the advancement of cinematic technology. It just isn’t likely to greatly excite anybody emotionally or imaginatively, except in terms of what its unveiled tech can be applied to next.