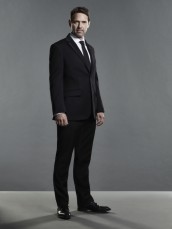 Dougray Scott as Jacob Kane and Ruby Rose as Kate Kane in BATWOMAN – Season 1 – “Down Down Down” | © 2019 The CW Network, LLC. All Rights Reserved/Robert Falconer

In The CW’s new series BATWOMAN, based on the DC Comics and premiering Sunday, October 6, Ruby Rose stars as the title character. Kate Kane returns home to Gotham City to find the place under siege due to the absence of Batman, aka her cousin Bruce Wayne. Kate decides to take up his crime-fighting mantle, as well as co-opting the Batcave.

Dougray Scott plays Kate’s father, Col. Jacob Kane. The colonel is an ex-military man who now heads up the Crows, a private security firm that keeps order in Gotham City, at the expense of freedom. The colonel loves his daughter, though he doesn’t know how to deal with her independent streak, and has no idea that she’s the new caped crusader.

Scott works constantly. In a certain quadrant, he’s still famous for playing the prince opposite Drew Barrymore in EVER AFTER: A CINDERELLA STORY. His other film credits include MY WEEK WITH MARILYN, HITMAN, DARK WATER, MISSION: IMPOSSIBLE II, and DEEP IMPACT. His television work includes roles in DEPARTURE, SNATCH, HEMLOCK GROVE, and DESPERATE HOUSEWIVES.

It may take talking with Scott in person to realize what a great job he’s doing as Col. Jacob Kane. In real life, the actor’s native Scottish accent – he’s originally from Glenrothes, in Fife – is powerful, yet he sounds perfectly American on BATWOMAN.

ASSIGNMENT X: So were you particularly looking to do a television series at this time? How did you come to be involved in BATWOMAN?

DOUGRAY SCOTT: Well, they sent me the script, and offered me the part of Jacob, and I read it, and I loved the script. And I hadn’t done something like this before. I try and do new things when the opportunity comes along, and I spoke to [BATWOMAN series developer] Caroline [Dries] and [executive producer] David Nutter, and then I spoke to Marcos Siega as well when he came on board as the director. They were all very persuasive, and it was, I thought, a great show to get involved with. So when it came time, I thought, “Yeah, why not?”

AX: What appealed to you most, the overall story, or your particular character?

SCOTT: I think both. I think the story, the world, that BATWOMAN is in, that whole genre of comic book, was appealing, and the character was very complex and was very well-written. And they obviously told me the arc of the character, and so I was excited to do it.

AX: Jacob has remarried since Kate’s mother died when Kate was a child. Does he see himself more as a father, or as a businessman, or as a husband?

SCOTT: I think he’s all three. I think that he would say that he’s as much a husband as he is a businessman, or a commander of a military-style security force, but in actual fact, that’s his passion. He’s an ex-colonel in the U.S. Army, so that’s his life, that’s his world, and that gives him the opportunity to practice all he’s learned in his life. As a father, he has problems with his daughter, and that whole history, with his first wife dying and his [other] daughter dying in the car crash. And I think what gets him out of bed in the morning is not, “Oh, great, I get to be a father,” it’s, “Oh, great, I get to protect Gotham City.”

AX: Are the Crows like the independent contractors we send into the Middle East, except they’re here?

SCOTT: Except it’s in Gotham, yeah. They work in tandem with the Gotham City Police Department, but they’re specialists. They’re a specialist security firm. 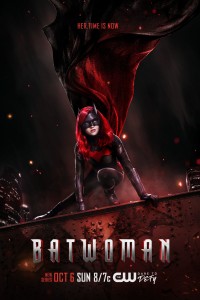 SCOTT: As far as he’s concerned, they’re a clean operation. If they are dirty, it’s not in his knowledge. That’s kept from him, if that turns out to be the case.

AX: While BATWOMAN mostly shoots in Canada, along with The CW’s other DC shows, there’s some location shooting in Chicago. Do you get to shoot in Chicago much?

SCOTT: Oh, no. We’re going to Chicago for five days.

AX: Had you worked in Chicago before?

SCOTT: Never. Never worked in Chicago, so looking forward to seeing the city.

AX: How long has it been since you’ve been a regular on a TV series?

SCOTT: Oh. A long time. I did SNATCH for two seasons for Crackle. So that was I guess the last time I was a regular on a show, but that was [streaming]. But it’s fun, it’s nice.

AX: Do you enjoy the rhythms of a TV series, where you can work on the character over a long period?

SCOTT: Yeah. You’ve got a longer time to explore the history of a character, and to explore all the aspects of a character, and get to see the whole of them as well. Whereas in a movie, you’ve got ninety minutes to do that. That’s why the scripts are different on a movie than they are on a TV series. [With a movie] you get from A to Z much quicker than you do on a TV series. But it’s equally as enjoyable. And I’m enjoying this process.

AX: At this stage of your career, you’ve played a lot of military people. Did you have to learn anything whatsoever in order to do play the colonel in BATWOMAN properly?

SCOTT: You refresh your knowledge of that [military] world, so that’s what I did. I looked at a lot of movies, documentaries, and you train for the scenes that you have to do, the weapons training, and the fight scenes, and the rest of it. I’ve done a lot of that stuff before, so …

AX: How is Ruby Rose as a costar?

SCOTT: I love Ruby. I adore her. 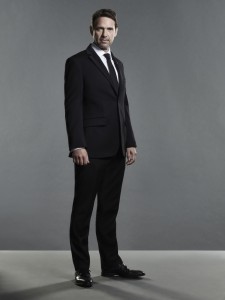 SCOTT: I have a movie at the Toronto Film Festival, called SEA FEVER, an Irish film that Neasa Hardiman directed, with Connie Nielsen. And then I have another movie that comes out soon called SULPHUR AND WHITE, directed by Julian Jarrold. And when I have my hiatus, I’ll try and do something else. So I’m busy.

AX: And what would you most like people to know about BATWOMAN?

SCOTT: Well, I’d like them, I guess, to know that it’s kind of groundbreaking in its portrayal of the first female gay [lead] character on a comic book show, and it’s a real family drama as well.