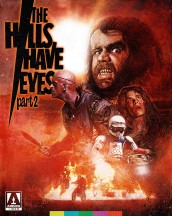 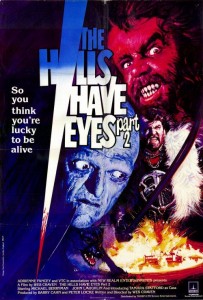 Filmed before Wes Craven’s seminal 1984 classic A NIGHTMARE ON ELM STREET and released in the U.S. a year later, THE HILLS HAVE EYES PART 2 is an obvious cash grab by all involved serving as a follow-up to Craven’s own 1977 cult hit.

While some of the inventiveness Craven displayed in ELM STREET is missing here, there is some considerable charm to THE HILLS HAVE EYES PART 2 in both its coherent and incoherent attempts to reinvent and update the unsettling story of the original film into the 1980s.

The end result is more loose and silly than its original, while tossing in every 1980s teen archetype you can imagine. The story begins with original survivor Bobby (Robert Houston) recounting the original film in flashback to his psychiatrist. He’s nervous about traveling with his motorbike team to the same desert where a group of mutant-esque desert dwellers murdered his family. When he decides it’s best for his sanity to not embark on this journey, his partner in the motorbike team Rachel (Janus Blythe) takes over for him. She harbors a dark secret though – eagle-eyed fans of the original will understand why pretty quickly. 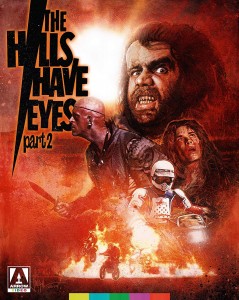 Not surprising, the bus ride to the desert for the big race is damaged and quickly we know why – the hills still have eyes. Pluto (Michael Berryman), who survived the original film and new menace The Reaper (John Bloom) are up to old and new tricks murdering these stupid teens one by one.

While the movie is contrived and looks incredibly low budget at times, it also features some surprisingly effective set pieces and clever gore. It also contains the single-most deranged (and yes, memorable) moment in any 1980s horror film sequel – a flashback from the dog named Beast who survived the original movie as well. If you’re going to make a cash grab, make one that doesn’t give a rat’s ass about logic, reasoning or outright ridiculousness.

Oddly enough, THE HILLS HAVE EYES PART 2 isn’t as mean-spirited as the original and its lighter tone works to its advantage. Many of the kids are clear archetypes, but the actors make the most of the lackluster material. There’s also huge logic gaps both in geography of where certain characters are at any given point. The movie also misses a couple of opportunities for bigger surprises. The Rachel character should have had a bigger role in the climax of the film and Bobby disappearing completely after appearing in the beginning (and not being a surprise savior during the finale) only hints that all of his stuff was probably shot in post-production to pad the running time.

Still, I have a soft spot for all Wes Craven films. He tried so many different things and experimented with so many different subgenres in horror that even his lesser efforts have his patented charm. And you can’t help think that without the experience on THE HILLS HAVE EYES PART 2, he wouldn’t have pushed himself to elevate his next film A NIGHTMARE ON ELM STREET to the classic that it became.

The Arrow Video release includes some great special features. In a documentary about the making of the film (including various actors and crew), producer Peter Locke talks about the film quite honestly (i.e. it was a cash grab), but also has fond memories of working with the late Craven. This is the kind of special feature that makes these horror movie reissues so refreshingly honest – when the participants recall the film’s good and bad times and wholly admit when there are shortcomings but not distancing themselves from the films like many people do when they move on to bigger and better things.

Other bonus content includes a reversible poster and a limited edition 40-page book about the film including an archival FANGORIA set visit article.

If you’re a fan of forgotten 1980s horror and most importantly Wes Craven, it’s worth checking out this film. It may not be his best, but it has the master of horror’s mark throughout and it’s nice to see it remastered alongside his popular, better known films.

CLICK HERE TO PURCHASE THE HILLS HAVE EYES PART 2

TCA 2011: Why ABC thinks SKATING WITH THE STARS failed
THE KILLING's Joel Kinnaman Says the Viewer Will be Rewarded in Season...
David Tennant chats about his new thriller BAD SAMARITAN - Interview
LUCIFER: Co-executive producer and writer Mike Costa talks about the e...