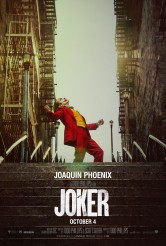 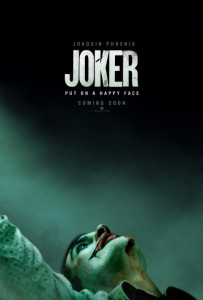 Seldom has it been so hard to figure out a letter grade for a movie review. JOKER doesn’t precisely defy normal measures of quality, but its ambiguities are simultaneously intriguing and frustrating. Despite rumors to the contrary, JOKER is set squarely within the Batman universe, even if this is a Gotham City grimier and nastier than Bob Kane and Bill Finger ever imagined. As genres go, though, JOKER hews closer to TAXI DRIVER or DEATH WISH or any number of underdog-takes-on-tormentor films than it does to what we normally think of as comic book movies.

It’s the late ‘70s (we can tell even before the movie starts from the style of the Warner Brothers logo). When we meet Arthur Fleck (Joaquin Phoenix), he’s working as a Rent-a-Clown on the mean streets of Gotham, which looks identical to New York City in that era. Arthur already has some issues, but these become much more severe after he’s mugged and beaten by a gang of kids. We see that Arthur lives with his needy, insensitive mother (Frances Conroy). Together, they faithfully watch late-night talk show host Murray Franklin (Robert De Niro). Arthur sees a social worker (Sharon Washington) in order to get the many medications he needs for stability. We also learn that Arthur wants to be a standup comedian, and suffers from Tourette’s-style condition that causes him to burst into uncontrollable laughter at times of stress. When Arthur is at last able to return to work after the beating, a coworker (Glenn Fleshler) gives him a revolver.

As origin stories go, JOKER works as well as any other for Batman’s most famous nemesis. Watching Arthur’s evolution is undeniably powerful, mainly because of Phoenix’s lived-in, bled-in performance. He can go from pathetic to rational to scary in a flicker of an eyelid. Phoenix’s Arthur/Joker also dances, spontaneous physical expressions of emotion that don’t change the reality level, unlike songs in musicals, yet serve the purpose of giving voice to what simple words cannot convey. It works perfectly for both JOKER’s Arthur and Batman’s Joker. These moments are neither clumsy nor overly graceful. Rather, Phoenix makes them look wholly organic, movements that are extensions of a psyche trying to accept its true self. His work here is remarkable.

There are some concerns that some viewers may identify too closely with Arthur and try to emulate him. These concerns don’t seem entirely unwarranted – it’s a lot easier for a disturbed person to lash out with a revolver than, say, for someone to successfully emulate the improbable strength and stealth of HALLOWEEN’s Michael Myers.

The bigger concern, though, is context. Director Todd Phillips and his co-screenwriter Scott Silver have crafted a scenario in which their protagonist is almost always right. When Arthur first lashes out, we’re on his side; it starts as self-defense and doesn’t move far from there. Later male victims are, if not physical threats, pretty horrible people who (certainly in movie terms) deserve some sort of comeuppance. 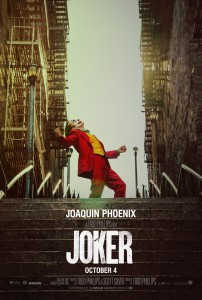 There are two issues here. To discuss this in as non-spoilery a manner as possible, a situation with a woman is handled so ambiguously that we can’t tell what Arthur has or hasn’t done. Should we assume he’s crossed the line? Should we assume he made a minor mistake? Are women supposed to be thought of as plot points rather than people? Should we think this is some sort of Rorschach test for us designed by the filmmakers? The last seems a bit pretentious, but it’s the filmmakers’ prerogative, so we can go with that.

But the larger issue is that Arthur literally, verbally shames others for their lack of empathy while displaying no empathy himself. JOKER doesn’t treat this as hypocrisy, or a sign of Arthur’s psychological issues. Instead, the film seems to want us to side with him against some people who are, in their way, equally downtrodden. And JOKER is under no illusions that it exists in a vacuum. Its class divisions mirror those in the real world. Indeed, the exploitation of the poor by the rich has such an impact on Arthur that his Joker seems less an agent of chaos than a reluctant crusader.

JOKER has a couple of logic glitches (like why anybody would give Arthur a gun, or why anybody in Gotham ever leaves a door unlocked). These speak to a bit of underestimating the audience. What speaks more to this is that the movie embraces its main character to such a degree that it winds up demonizing people who aren’t trying to harm Arthur; they’re castigated along with the actual villains for simply not dropping everything to help him, even though he never helps anyone. This may be at the heart of why some viewers feel such discomfort. JOKER is effective art in the service of a worldview that endorses a double standard.