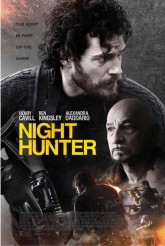 An average thriller with a good cast 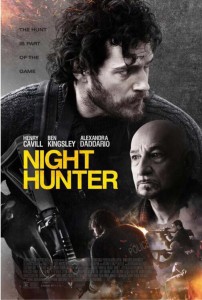 NIGHT HUNTER is one of those internationally-made thrillers that is competent and well-cast enough to be diverting, but without a solid structure.

Writer/director David Raymond creates a setup that promises something much more complex than it delivers. The vigilante duo seems to be taking a page from the HARD CANDY playbook, but NIGHT HUNTER can’t exactly figure out how to use them in a novel way. The two plot tracks combine, but only to slot characters from one into the other, instead of merging them into something that creates an unexpected dynamic. There’s one big plot twist that we may or may not see coming (it’s certainly foreshadowed well before it hits), but it’s not related to the potentially interesting mashup.

While Cavill has demonstrated that he can do a decent American accent (as Superman and in MISSION: IMPOSSIBLE – FALLOUT, to cite examples), it’s fun to get to hear him speak in his own cadences. Kingsley of course can do any number of accents, but it’s likewise agreeable to have him not do one for a change. Then again, it seems that having two British people, both affiliated with the legal system in the same Minneapolis jurisdiction could use a little explanation.

In broad strokes, the plot moves along, aided by a very good performance from Fletcher, who moves fluidly from hateful to pitiable to annoying and all places in between as the antagonist. Besides the leads, Stanley Tucci and Nathan Fillion show up in effective supporting roles.

While it may not be fruitful to go too far in arguing a point with a movie like NIGHT HUNTER, which clearly isn’t intended as a message film, it presents some assertions as fact about how to stop predators that don’t necessarily jibe with reality. It is generally accepted that rape is a crime of rage, not lust; reducing the lust does not remove the rage, which may still express itself in violence.

This aside, if cops vs. psychos with secrets is a subgenre you enjoy, NIGHT HUNTER should be acceptable fare.