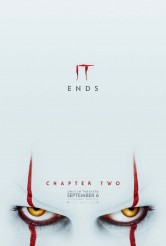 Morphs from horror to adventure in the third act 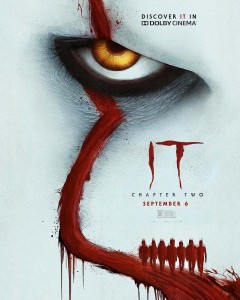 As its title indicates, IT CHAPTER TWO is a sequel to 2017’s IT. Both are adapted from Stephen King’s novel. IT director Andy Muschietti is back, as is screenwriter Gary Dauberman (credited solo this time after being one of three writers credited on the first film). King’s novel IT took place in two timeframes. There’s a summer in Derry, Maine, equal parts enchanted and terrifying, when seven youngsters bond profoundly as they investigate a creature that they come to call It, which preys on the town’s children. The other timeframe catches up with the seven twenty-seven years later, when the monster they hoped they’d defeated returns to Derry.

The film IT deals exclusively with the earlier section of King’s book. Part of the film’s success is how it captures the mood of both the ‘80s in general and ‘80s horror specifically. The young actors are compelling, Bill Skarsgard is great as It’s primary identity, Pennywise the Clown, and the movie is overall creepy and enjoyable. IT CHAPTER TWO is still relatively creepy and more or less enjoyable, but elements that seemed small problems in the first film loom larger here.

During the course of IT, our young heroes discover that Pennywise has been surfacing every twenty-seven years since Derry was first a frontier village. When they subdue the monster, the seven friends vow that, should Pennywise arise in twenty-seven years, they will reunite in Derry to kill it once and for all. 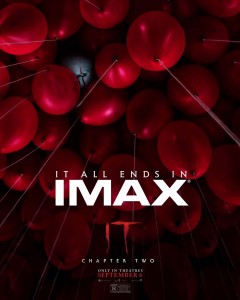 IT CHAPTER TWO finds the friends scattered across the country, with only Mike (Isaiah Mustafa as an adult, Chosen Jacobs reprising his role as the tween) still in Derry – and consequently the only one who remembers what actually happened that fateful summer. Mike has been researching the hell out of Pennywise, so when horrible murders resume in Derry, he’s ready to make the phone calls. Bill (James McAvoy as the adult, Jaeden Martell back as the tween) Beverly (Jessica Chastain as the adult, Sophia Lillis as the tween), Ben (Jay Ryan/Jeremy Ray Taylor), Richie (Bill Hader/Finn Wolfhard), Eddie (James Ransone/Jack Dylan Glaser), and Stanley (Andy Bean/Wyatt Oleff) at first have no idea why Mike is contacting them. However, most of them show up in Derry. As their memories return, Pennywise begins tormenting them once more, and not everybody is sure that they want to honor their old oath.

Some wise tweaks have been made to the source material in terms of who lives and who dies, but other issues go unaddressed. In IT, since it was clear that we had only half the story and there were mysteries for the characters yet to unravel, it was relatively easy to accept certain unexplained aspects of the narrative. In IT CHAPTER TWO, though, there are big questions, like how Pennywise is able to directly grab some victims, needs to lure others, and requires elaborate set-ups and/or human help to get anywhere near certain individuals. It’s also not explained how Pennywise evidently switched from adults to kids back to adults (his first murder in the new film is that of a grown man). There’s a rather spurious explanation of why the first group of people who tried to kill Pennywise failed in the attempt.

There are a lot of filmmakers who claim that their movies aren’t really whatever genre they are, that they’re really all about character. Nobody appears to be claiming that IT CHAPTER TWO isn’t a horror story, but in this case, the filmmakers seem to want it to be all about character. However, they are so earnest in this effort that it backfires to an extent. We spend so much time ping-ponging between past and present on moments of cowardice, bravery, hurt, and reconciliation that momentum is lost. By the third act, IT CHAPTER TWO still has fun visual flourishes, but it’s morphed from horror to adventure, as it’s hard to be truly scared by what’s happening. 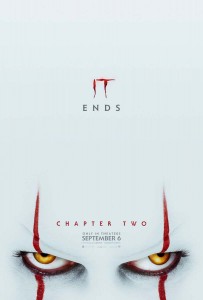 There are some wonderful moments. Hader is especially impressive as Richie, now a successful comedian who tries to defuse the tension with humor. Skarsgard continues to be deeply unnerving as Pennywise. There’s a direct shout-out to JOHN CARPENTER’S THE THING that does not suffer one bit from being readily identifiable (if they’re allowed to do so, more horror movies should replicate this bit).

Director Muscietti maintains an effective, grimy small-town look for Derry, and mostly handles scares deftly. It’s just that he and the other filmmakers want to evoke the feel of STAND BY ME in the midst of the fear-fest, but don’t deepen the characters so much as simply spend more time with them. Meanwhile, some vital plot mechanisms wind up being neglected.

IT CHAPTER TWO hangs together, and more of it works than doesn’t, but it doesn’t stand up to a great deal of contemplation.