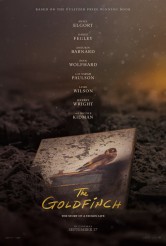 A literary adaptation that doesn’t reach its emotional goals 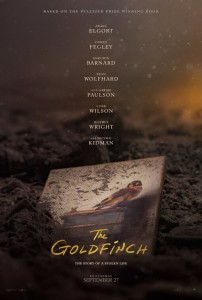 THE GOLDFINCH movie shares its title not only on the Pulitzer Prize-winning Donna Tartt novel on which it is based, but also with a real-world 1654 painting by Dutch artist Carel Fabritius. The “Goldfinch” painting is famous for having survived an explosion that killed Fabritius and destroyed most of his other work. It actually is on display in a collection in the Netherlands.

However, in Tartt’s novel and in the screen adaptation, directed by John Crowley from Peter Straughan’s script, “The Goldfinch” is on display at New York’s Metropolitan Museum of Art when it is seen by thirteen-year-old Theodore Decker (Oakes Fegley) and his mother Audrey (Hailey Wist). There is a terrorist bombing – in the film, we never find out the who or the why of this – that kills Audrey and a number of other people. The blast also knocks the painting to the floor. Theo, for reasons we learn gradually, puts the painting in his bag, takes it with him, and allows everyone to believe it was destroyed in the explosion.

We know from the very beginning of THE GOLDFINCH that the adult Theo (Ansel Elgort) is in an Amsterdam hotel room, despondent to the point of suicide. The movie goes back and forth in time between Theodore’s adolescence and adulthood to illustrate how he got here, geographically and emotionally.

By many accounts heard by this reviewer, as a novel, THE GOLDFINCH is powerful and engrossing. However, what works on the page does not always translate easily to film. We feel bad for Theo in his unmoored adolescence, but we don’t get enough of his internal life, despite Fegley’s fine performance, to feel true empathy. Because the film is a quasi-mystery, when we see the adult Theo, again, we’re sorry he’s in pain, but at first it’s unclear how much of it he has authored. While THE GOLDFINCH presents social awkwardness and bad parenting with authenticity, it doesn’t have anything new to say on either subject.

The most compelling part of the film THE GOLDFINCH may be the section set in Las Vegas, where Theo must live for a time with his ne’er-do-well father (an excellent Luke Wilson) and the father’s tough girlfriend (a likewise exemplary Sarah Paulson). Theo is befriended by Boris (Finn Wolfhard), a classmate and neighbor whose own home life makes Theo’s look idyllic. Boris turns Theo on to alcohol and hard drugs, but he also provides all-encompassing friendship. Despite a rather odd accent – granted, Boris has grown up all over the world, so who knows what someone with his background would sound like – Wolfhard has a reckless warmth that makes us root for their bond.

As THE GOLDFINCH starts to fill in its revelations, presenting certain elements in the wrong order and withholding one key story piece for too long, when things click into place, we feel cheated. Good mysteries allow the viewer to make educated guesses along the way, and to spot bits of misdirection at the end. THE GOLDFINCH robs us of this possibility. We also get a lecture on the significance of the title painting, which convinces us of its importance to the character who is speaking, but not necessarily to us.

Roger Deakins’s cinematography is inarguably beautiful, and he and director Crowley create images that are sometimes haunting, sometimes striking, always lovely. However, Crowley uses a singular visual style in parts of the film, where the actors are in sharp foreground focus and the background is practically a blur. This creates a distinctive look, but it doesn’t bring us any closer to the characters, while it distances us from environments that are sometimes quite significant. The result is more disconcerting than stirring.

THE GOLDFINCH boasts a number of noteworthy performances, delivered by – in addition to the actors already mentioned above – Jeffrey Wright, Nicole Kidman, Ashleigh Cummings and Denis O’Hare. Their work and Deakins’s mastery are reasons to recommend the film, but unless one comes in predisposed to invest, it’s neither a moving dramatic experience nor a satisfying thriller.