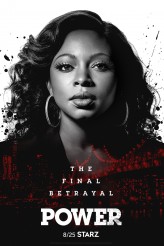 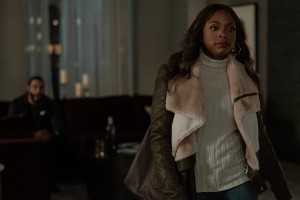 In the sixth and final season of POWER, Sundays on Starz, Naturi Naughton continues as Tasha St. Patrick. Tasha is the estranged and entirely fed-up wife of club owner/drug dealer James “Ghost” St. Patrick (Omari Hardwick). At the beginning of the series, created by Courtney A. Kemp, Tasha was concerned about her marriage. Now she just wants a life of her own, and the well-being of her and Ghost’s now-teen son Tariq, played by Michael Rainey Jr.

Naughton, originally from New Jersey, played the real-life rapper Li’l Kim in the feature NOTORIOUS. Also a singer, Naughton was also in the big-screen remake of FAME, and a series regular on THE PLAYBOY CLUB and THE CLIENT LIST.

ASSIGNMENT X: When you started on POWER, did you think that it was going to have these kinds of legs to last this long?

NATURI NAUGHTON: When I started the show, I believed that it was going to have legs. I actually thought it had the potential to be a hit, but I didn’t know a lot about the network of Starz. We were a new show, we only had eight episodes, and I think a lot of people underestimated us. We shocked the industry, and I think we shocked ourselves, and the underdog came out on top. But I always believed in the show. I just didn’t know we’d be six seasons. I didn’t know we’d be here six seasons later, with Mary J. Blige joining [the spinoff, entitled POWER BOOK 2: GHOST]. It’s pretty awesome.

AX: Do you know if you’re going to be involved in the spinoff?

NAUGHTON: I don’t, not yet. They won’t tell me anything, but I’m just excited to hear that Mary is within the world, and I’m crossing my fingers [laughs].

AX: Mary J. Blige joined the POWER cast and producers onstage earlier today, and all the actors took turns sitting in the chair next to her. I have never seen a Q&A panel play musical chairs like that before …

NAUGHTON: I know. That was so different, and really fun. We’re a very family-oriented group. The way that our cast operates – we enjoy having fun, we try to make the best of it. So we’re having a good time. And musical chairs wound up being a very impromptu moment today that makes us very real.

NAUGHTON: Tasha was pretty pissed off for the last five seasons. This season, she has no more energy to be pissed off. Frankly, Tasha is like, “You know what? You have been this selfish person all along, and now I’ve got to change my moves.” So I don’t think she is angry as much as she is focused on saving Tariq, and starting her own thing. I think she’s becoming more independent of Ghost, which is really exciting.

AX: There’s a scene in the Season 6 premiere where Tasha seems to be feeling, “I’m really angry, but, I don’t want Ghost and his former best friend Tommy, played by Joseph Sicora, to kill each other, because that’s just too much.” So …

NAUGHTON: They’re family, they’re brothers. And I don’t think Tasha wants this. In some ways, she’s like, “Wouldn’t my life be better without Ghost? Maybe.” But I don’t know that she wants them to kill each other. 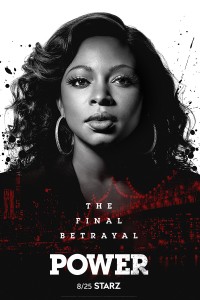 AX: Does she think Tariq’s life would be better without Ghost?

NAUGHTON: No. Because he needs his father. At this point, she doesn’t think that Tariq’s life would be better, because she knows how important it is to have his father in his life.

AX: Ghost’s logic for tricking Tommy into killing Tommy’s father so Tommy wouldn’t be mad at Ghost doesn’t make a lot of sense …

NAUGHTON: Tommy’s just as mad. But I guess Ghost feels like at least it wasn’t his hands that did the deed. But he manipulated Tommy, which unfortunately, Tommy falls prey to that mental game. He’s not as swift as Ghost is. But he’s mad anyway. His father’s dead one way or the other. I mean, that’s the way of the game.

AX: Is Tasha at all still in love with Ghost at this point?

NAUGHTON: No. I thought about that. I asked Courtney that – “Are they still in love?” Probably not, because at some point, Tasha has to protect herself. How can you be in love with someone who’s ruined your life? Your children, your home is completely ruined and shot up. Everything that Tasha once knew has completely vanished.

AX: How did you expect Tasha to progress over the run of the show, and how has she progressed?

NAUGHTON: She’s lost so much. I didn’t expect her to become this independent of Ghost, like I said earlier. I’m really proud of Tasha. She’s starting her own business this season, she’s fighting for the life of her remaining children. I feel like I grew up on this show, to be honest. I started the show at the age of twenty-nine, and I feel like I was kind of a young woman – I’m still a young woman. But now I’m like, “Oh, okay, I’m stepping into my womanhood. And this character is helping me to do that.” So watching Tasha grow has in its own way helped me to grow.

AX: You said during the Q&A that you identified most with Tasha’s vulnerability, but what has been the most fun thing about her to play?

NAUGHTON: Her wardrobe. Her sexiness. Her fierce walk. Her confidence. Tasha has the confidence of First Lady Michelle Obama. She knows she’s beautiful, she knows she’s hot. She can wear anything, Alexander McQueen to Tom Ford to Louboutin. She’s very secure, at least on the outside, but that’s fun to play because, my goodness, she’s got the best wardrobe in Hollywood.

AX: What have your interactions with the POWER fans been like?

NAUGHTON: Great. They love us, but they’re also very passionate, sometimes to a point where they get a little too wrapped up. I love our fans. They fight for us, they’re mad at us, they yell at us on Instagram and Twitter, but they show up every Sunday night. So I think we’re very blessed.

NAUGHTON: I have a film that I did with [producer] Reginald Hudlin, EMPEROR . It’s really, really good. It’s a period piece, and I think in the next couple months, we’ll be talking about it more. I’m really excited about this project as well.

AX: And what would you most like people to know about POWER Season 6?

NAUGHTON: I want people to know that we poured our blood, sweat and tears into this. We are going to give the audience a hell of a series finale. And don’t be mad at anybody, it’s just TV. Because the storylines are going to be very emotional.

This interview was conducted during Starz’s party for the Summer 2019 Television Critics Association (TCA) press tour.