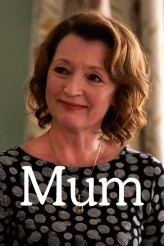 The actress discusses the third and final season airing on Britbox 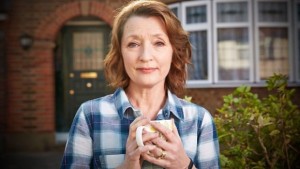 In MUM, currently streaming its third and final season on Britbox, Lesley Manville plays Cathy Bradshaw. Cathy is a widowed mother with a grown son, Jason (Sam Swainsbury). Cathy has finally embarked on a new romantic relationship relationship with lifelong friend Michael (Peter Mullan), something that Jason can’t stand. The third season takes place over the course of a week, as Cathy, Peter, Jason, and Jason’s girlfriend Kelly (Lisa McGillis) gather at a country estate to celebrate the birthday of Cathy’s brother Derek (Ross Boatman).

Manville has won a Royal Television Society Award and been nominated for a BAFTA for her work as Cathy. The actor, originally from Sussex, England, was also nominated for an Oscar for her supporting work as the unflappable sister in PHANTOM THREAD, won a wide variety of Best Actress accolades for her performance in the film ANOTHER YEAR, and is a major star of the stage, internationally as well as in Britain.

If that’s not enough, Manville can also currently be seen in her third season as the manipulative eighteenth-century brothel proprietor Lydia Quigley in HARLOTS on Hulu.

LESLEY MANVILLE: It’s good, isn’t it? It sounds like a planned it [laughs].

AX: Did the two series come up more or less simultaneously?

MANVILLE: Let me think now. I think I did Series 1 of MUM, and then HARLOTS came along. I can’t guarantee that that’s the order it happened in. But listen, the reason I don’t particularly remember it is because I’ve spent my whole career playing parts that are not like the one I’ve just played, and that’s what keeps me going, and that’s what I enjoy, because I always want to be playing somebody different.

AX: Do you have a preference for one type of character over another?

MANVILLE: No. There’s a richness to be mined for all of them. It’s just a nice variety for me to have that kind of chameleon quality to my abilities, and therefore I can say, “Yeah, I can play Lydia in HARLOTS, and yes, I can do Cathy in MUM.” 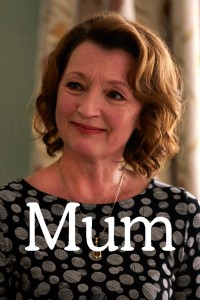 AX: With Cathy in MUM, is there any similarity to her behavior with people who are clearly behaving inappropriately, where she’s being very forbearing and diplomatic, and perhaps how you are at press tour, where you have to talk to a lot of strange people?

MANVILLE: No. I think when I’m at a press tour, I’m at liberty to say what I think, and I probably do. But Cathy is an exemplary woman, in that, out of kindness and understanding of other people’s feelings and situations, she doesn’t always tell them what the audience is perhaps wanting her to tell them. She’s very patient, she’s very nonjudgmental, and she lets people be what they are, and doesn’t give them a bad time for it.

AX: Is she giving her son Jason his space to deal with her new romance?

MANVILLE: Absolutely. Because he’s grieving, too. She’s been dealing with her own grief over the loss of her husband, but he’s dealing with the loss of his father. So she is giving him space, and she understands that he feels uncomfortable about her relationship with Michael. She doesn’t not get that. But he’s not in the relationship with Michael. Jason’s making an objective observation of it, and in a way, forming a received opinion of what he thinks he should be feeling about it, to a degree. He just doesn’t want anyone to be with his mum, of course, because if she’s not with his dad, who’s dead, she shouldn’t be with anyone. And that’s what he has to learn – that she’s a woman, with feelings, and needs. She wasn’t particularly looking to replace her husband, or looking for new love, but she found it. It came her way in the shape of somebody that she’d known for forty years and was her husband’s best friend. All of those things are kind of coincidences, really. But her son has to accept that – lots of times, she says to him, “I don’t need looking after, I’m okay, I can look after myself. But you’ve got to let me live my life.”

AX: How is working with Peter Mullan, who plays Michael?

MANVILLE: It could not be better. It could not be better working with any of the people on MUM. We are an exquisitely brilliant team of actors that make it all together. We happen to all really get on, which was highlighted by the fact that, Season 3, we didn’t shoot it in a studio in London, we shot it on location. So we were all away for eight weeks in the countryside, and we were so excited about the prospect of having this eight-week holiday together, forgetting the fact that we would actually get up at five in the morning and go make the program. But we all get on phenomenally well, and work together very well. And Peter Mullan – Cathy does a lot of listening, but it’s very easy to listen to Peter. Look at him. People did used to say, “Oh, my God, I wish somebody would look at me the way he looks at you.” It’s very easy to melt, with that gorgeous face telling you that they love you. It’s nice.

AX: And where did you stay? That amazing estate in Season 3 of MUM is a real house?

MANVILLE: That’s a real house, we shot it all within that real house, and that real house is in a county called Surrey, which is just south of London, and it’s in a town called Dorking. So that’s where we shot it. And all the interiors were the real interiors, and the garden and the grounds. We totally shot the whole thing there.

MANVILLE: Oh, definitely. I would never wear the terrible jeans that Cathy wears [laughs]. She doesn’t care about her clothes. That’s what’s really nice about Cathy. She has no ego. She’s confident in herself. Not to say that you have a massive ego if you like clothes, but she’s easy. She doesn’t dress badly – it’s not a considered thing. She likes to look nice, she’s clean, she’s well put-together, and all of that, but it’s not such a big costume, as you’re quite rightly pointing out, as something like HARLOTS, but nevertheless, I absolutely don’t feel like me when I’m dressed up as Cathy.

AX: Do the costumes help you get into the character?

MANVILLE: They always do, if you have a good costume designer, and the same with makeup and hair. You go on a journey with them, and it’s a collaboration, like with all of the departments. I get an awful lot out of those people. If they have something new, good to say about it, it makes me think in ways that I might not have thought, which is great. That’s what a good costume, makeup, hairdresser will do.

AX: As MUM and HARLOTS, not to mention all your other projects, went forward, did you have scheduling issues that had to be worked out?

MANVILLE: Yes, always. I’d been in the States doing a play [LONG DAY’S JOURNEY INTO NIGHT at the Wallis Annenberg Theatre], and it kind of all hinged on that, and when I could get back from that.

MANVILLE: Yes. I’ve got a film called ORDINARY LOVE, which is a film starring myself and Liam Neeson. I will have another film with Kevin Costner and Diane Lane, called LET ME GO. I’m in MALEFICENT: MISTRESS OF EVIL, which comes out in October, and I’ve made another film called MISBEHAVIOUR, which is about the 1970 Miss World competition in England, and that’s coming out at some point, I don’t know when. And then in December, I’m going to do a play at the National Theatre. It’s a Tony Kushner version of a Frederic Durrenmatt play called THE VISIT.

AX: And what would you most like people to know about Season 3 of MUM?

MANVILLE: Without negating Season 1 and 2 in any way, shape or form, it is the most glorious of the series.

This interview was conducted during Britbox’s portion of the Summer 2019 Television Critics Association (TCA) press tour.