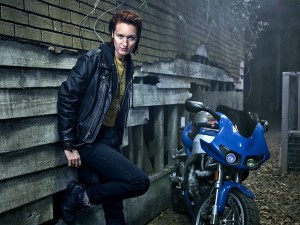 In Season 3 of MR. MERCEDES, adapted from the trilogy of novels by Stephen King, adapted for television by David E. Kelley, and airing Tuesday nights on AT&T’s Audience Network, Breeda Wool returns as Lou Linklatter. Lou is in custody after having shot and killed Brady Hartsfield, the notorious “Mr. Mercedes” mass murderer/serial killer, in the Season 2 finale. Lou’s friends at the Finders Keepers detective agency, former cop Bill Hodges (Brendan Gleeson) and conscientious Holly Gibney (Justine Lupe), and Lou’s lawyer Roland Finkelstein (Brett Gelman), are all trying to help her avoid a first-degree murder sentence. Lou, plagued by either ghostly visitations from Brady or by intense hallucinations, believes public sentiment in her favor may help her beat the rap.

Wool, also a producer and writer, sits down to talk the new season of MR. MERCEDES, along with her new film, MOTHER’S LITTLE HELPERS.

ASSIGNMENT X: When Season 3 of MR. MERCEDES begins, would you say Lou is at her lowest ebb so far?

BREEDA WOOL: Yeah. In the story, Lou makes a choice to put a bullet in Brady Hartsfield’s eye [when he’s in a courtroom], and that act alone – there is nothing is to say that I didn’t have violent fantasies of my own. In Season 1, when Brady kills Ryan Springhill [a homophobic customer who gives Lou problems at the tech store where she and Brady work in Season 1], I say to him then, “I wanted this guy to die.” And Brady accomplishes that for me. Like, “my hero” [laughs]. And what is the line that was keeping me from lashing out, from feeling oppressed, forgotten, diminished by my employer’s bigotry thrown at me? Where’s the line where I lash out? And I lashed out at Brady, because he was the one person that was like me in the story, and he betrays me. He never even gave me the option – I always think in Season 1, when he stabs me, what if he hadn’t? What if he’d said, “Help me, Lou”? We don’t know what would have happened. But he never gave me that option. He disempowered me. And I took my power back. Brady was asking for it [laughs].

AX: Well, if somebody stabs you with intent to kill, however you respond to them after that is arguably appropriate …

WOOL: Yeah, and I think it was us against the world. That’s what we built for ourselves at that sh*tty job, where people treated us like dirt. We knew that we were brilliant, together, and to have that betrayal – David E. Kelley is an incredible writer, and one of my favorite things that he wrote for me as Lou in this story is the line where [she talks about] never really knowing if people’s intentions are pure. People want to believe in me in this story when I don’t even believe in myself. Were my intentions pure in killing Brady Hartsfield? Was I saving lives? Or did I say, ‘This mother*cker stabbed me, and I’m going to blow his brains out”? I don’t know. [laughs] That’s a very fine line, and David E. Kelley really beautifully explores that.

AX: Of the two, who does Lou trust more or less? Her lawyer Roland Finkelstein, or Bill Hodges?

WOOL: Okay. This is the thing [laughs]. It’s a really funny thing, when you’ve been abandoned or abused, you want to change the ending to that story, but you also expect it to happen, so when you talk about things like trust, when you have a best friend like Brady Hartsfield, and you’ve been through the foster system, and over and over and over again, people betray you, part of the trauma of violence and betrayal is never knowing how to trust people. And that’s part of the paranoia, the nervousness. You want to be able to have people on your team, but you’re expecting them to betray you. It’s the most horrible part of the cycle of violence, and it’s learned helplessness. And so there’s a side of me that wants to trust people, and there’s a side of me that’s going, “I know you’re going to screw me over. I know it.”

AX: At the start of MR. MERCEDES Season 3, it’s presented as ambiguous as to whether Lou is having an actual supernatural experience when she sees/hears Brady, or whether she’s hallucinating. You don’t need to give the answer as to which it is, but do you know the answer?

WOOL: I do know, but I definitely can’t say. [laughs] But in terms of where the gray is on that, what’s the difference? When we dream up demons, they arrive. You saw that in the Catholic Church, with the abuses in the Catholic Church. You’re terrified that somebody’s going to come attack you. They will. They just will. The thing that you’re most afraid of and the thing that people run from the most will show up on your doorstep. It always happens. It’s sort of like, did you summon it yourself? Or is it really …?

AX: Your film MOTHER’S LITTLE HELPERS has been making the festival rounds. You’re in it, and you’re also an executive producer and writer on it …

WOOL: The film was outlined and improvised, kind of like a Christopher Guest movie, and Kestrin Pantera, the director of that, is this incredible, brilliant community filmmaker. She sort of builds a community and then makes a film out of the community. Kestrin led Milana Vayntrub, Sam Littlefield, Melanie Hutsell, and we made this extraordinary film about death. It’s really funny, and it premiered at South by Southwest, and we had our screening [July 21] at Outfest. It’s an extraordinary film. It’s beautifully made, and totally gritty, and gorgeous. I love this movie. I executive-produced it, and then Kestrin, because the actors improvised the script, she gave us all a co-writing credit. 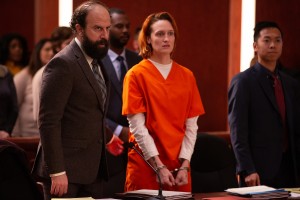 AX: Since it was at Outfest, is it reasonable to assume that there’s an LGBTQ aspect to it?

WOOL: So it’s four siblings go back to help their mother die, and our brother, played by the brilliant Sam Littlefield, is a gay man. In the story, our mother was a very flawed person, and there’s a very strong storyline of a gay man and his mother, which is quite a story to be telling [laughs].

AX: Do you have a distributor?

AX: Besides MOTHER’S LITTLE HELPERS, do you have anything else coming up we should know about?

WOOL: Yes. I am in a couple of episodes of the third season of GLOW, and I’m in one of the upcoming episodes of ROOM 104.

AX: And what would you most like people to know about Season 3 of MR. MERCEDES?

WOOL: I think it might be our best season yet. I personally think that this show is absolutely magnificent, and I am so proud to share it, and I’m so proud for people to see it. I want them to know that it’s David E. Kelley and [director/executive producer] Jack Bender at their finest.