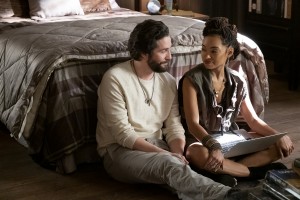 DEAR WHITE PEOPLE, now in its third season on Netflix, is based on the 2014 feature film written and directed by Justin Simien, who also created and developed the series. DEAR WHITE PEOPLE takes its title from a college radio program run by Samantha White (Logan Browning in the series, Tessa Thompson in the film), a student who feels it is time to call out her classmates on their racism, whether covert or overt.

Despite Sam’s political sentiments, she is involved with mostly woke aspiring documentarian and fellow student Gabe Mitchell, who is white. Gabe is played by John Patrick Amedori, originally from Maryland. Amedori’s other credits include playing the thirteen-year-old version of Ashton Kutcher’s character in THE BUTTERFLY EFFECT and roles in VANISHED, GOSSIP GIRL, HINDSIGHT, THE VATICAN TAPES, and AFTER DARKNESS.

This interview was conducted in the set of the DEAR WHITE PEOPLE radio station, with shelves of LPs, a cozy recording booth, and – not part of the show – a company member’s cute dog, whose name, Amedori relates, is Billy Dee Williams. “And I love him. He’s great.”

ASSIGNMENT X: What is your character’s relationship to this radio station?

JOHN PATRICK AMEDORI: Well, in the first season, I’m dating Sam, and she has her radio show called “Dear White People,” so this was a special moment, because right after we tell each other we love each other for the first time, we holed up in here and made a little bed and talked about our relationship, in a very cutesy, lovey-dovey way. And then in Season 2, it’s actually where I conduct my documentary that I’m making, and Sam and Gabe really hash out all of their issues with each other, and it starts off in very passive, getting at each other, pushing buttons, until it just explodes and they lay everything on the table. So this is actually a really significant set for me, as far as Sam and Gabe and their story.

AX: What is Gabe doing in Season 3?

AMEDORI: Gabe is working on his grad film, and he and Sam are a little more domesticated. We see a different version of them, they’ve been together for awhile, they understand each other, they don’t have to push the buttons that they were pushing before. But more particularly, Gabe is trying to discover a little bit more of himself, inwardly and socially. It’s kind of a running theme with Gabe, but he runs into a very personal issue that he has to deal with. So we get to see him deal with things on his own.

AX: Is playing an aspiring documentary maker giving you any filmmaking aspirations, or did you have any already?

AX: You were just saying something about a band called Death …

AMEDORI: A question came up about music, and I sometimes send music to the cast when I’m reading things, and I sent Marque [Richardson, who plays Reggie Green] a song by a band called Death last season. The lyrics just seemed to fit the conversation we had previously had. 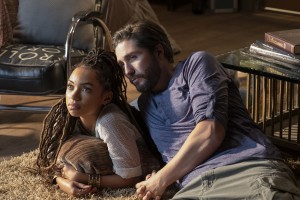 AX: How do you feel about the way that DEAR WHITE PEOPLE tackles social issues?

AMEDORI: I think if there’s a subject that needs to be addressed. I can’t say whether or not there’s a right and a wrong way to address some situations or topics. I actually really personally enjoy the writing on this show, and the characters, and how we utilize our writers’ personal stories, and our cast’s personal stories, and how we vocalize them to each other, and they actually wind up being on the show, so I enjoy the message of the show and how it’s presented for the most part. The show is really great at expressing perspectives. I think everybody can learn from it.

AX: And what would you most like people to know about DEAR WHITE PEOPLE Season 3?