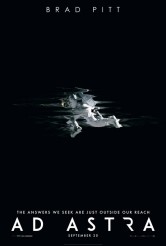 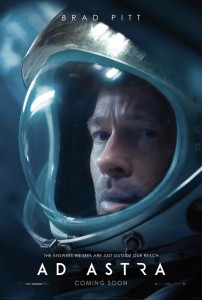 AD ASTRA is nominally a science fiction film. Its title translates as “to the stars,” and most of it takes place off-world, on a variety of spacecraft and space stations. The plot revolves around trying to prevent a solar system-wide power outage.

However, AD ASTRA is actually a family drama. More specifically, it is about an astronaut, Roy McBride (Brad Pitt), contemplating his relationship with his father, H. Clifford McBride (Tommy Lee Jones), a man who was distant emotionally even before he traveled to and was presumed lost near Neptune.

For some people, AD ASTRA is powerfully resonant, and this reviewer has no intention of arguing with the validity of their experience. It is absolutely well-produced, beautifully-made and well-acted. For those who do not respond to the film’s treatment of the subject matter, however, it’s hard to find much that is likely to elicit a response.

We are in the quasi-near future. Life on Earth seems pretty much as it is today, but (in one of AD ASTRA’s few moments of humor) the moon has become a travel hub similar to LAX. The solar system is being subjected to a mysterious pulse that is wreaking havoc will power grids, on Earth, on space vessels, and everywhere else that humans exist.

Roy is a calm, professional type, whose heart rarely accelerates even in stressful situations. He has followed in the footsteps of his father both in terms of his calling and in terms of the way he prioritizes work over family; at the start of the film, Roy’s wife (Liv Tyler) is leaving him due to his lack of attentiveness.

A branch of the space agency approaches Roy with the astonishing news that his father Clifford may be alive after being presumed dead for twenty-nine years, and further, that the mission he disappeared on may be related to the pulse. Roy agrees to go into deep space to try to find his father. 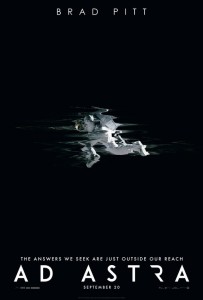 To explain some of the problems with the script, by director James Gray and Ethan Gross, would move into the spoiler zone. Suffice to say that the more we see how Roy’s bosses deals with problems, the more perplexing it is that they felt the need to send Roy at all.

Any movie can survive logic glitches. What AD ASTRA does, though, is have Roy tell us in voiceover what he’s pondering, when he’s not responding to an AI psychology unit. A little of this goes a long way, and it’s all through the film. If what we are shown in behavior, visuals and (when we get it) human interaction is not enough to illustrate Roy’s thoughts and feelings, it’s not enough to make most of us invest in those thoughts and feelings. Instead of getting us to contemplate the ways in which great men can mentally scar the sons who worship them, AD ASTRA starts to resemble a lot of space horror movies. The difference here is that, instead of having the mission interrupted by a monster, the mission keeps going, while we are privy to some private but unsurprising musings.

AD ASTRA is extremely physically handsome, and director Gray stages some intriguing action sequences. The topics the movie wants to discuss are valid and heartfelt, but for most viewers, they remain concepts rather than something we experience over the duration of the running time.