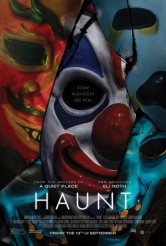 Low-budget horror funhouse film that mostly does what it should

HAUNT arrives a little early for Halloween, but has an appropriate Friday the 13th opening. The title does not refer to an actual haunted house, but rather to those independent Halloween mazes called “haunts.”

Set in the real college town of Carbondale, Illinois and shot in Kentucky, HAUNT introduces us to student Harper (Katie Stevens), who as we meet her is putting concealer on the black eye she’s received from boyfriend Sam (Samuel Hunt). Harper’s roommate Bailey tries to convince her to break things off with Sam via text message. When Harper is reluctant, Bailey persuades her to at least come out for a little Halloween celebration.

At a party with Bailey, Harper meets nice guy Nathan (Will Brittain), they’re joined by friends Evan (Andrew Caldwell), Angela (Shazi Raja), and Mallory (Schuyler Helford), and everybody decides to go in search of a haunt. After their vehicle is followed by a mysterious truck – Harper thinks it may be Sam – the group finds a haunt off the beaten path that promises to be “extreme.” This is no lie. 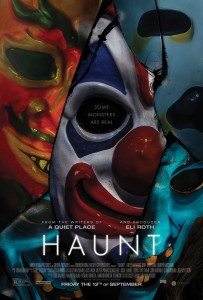 Writers/directors Scott Beck & Bryan Woods never make it entirely clear whether something actually supernatural is afoot , or whether it’s just major human malice. A little more clarity might have deepened the plot, but then again, too much exposition could dilute the proceedings. What we get is sustained creepiness, some impressively bizarre antagonists, and a maze that makes us (and the characters) not want to go forward or backward. The traps are varied, and the splatter is more effective for being used as punctuation rather than running continuously.

Harper is sympathetic and gets a bit of back story to explain some of her reactions. Her pals may be no more delineated than most main characters who find themselves in these kinds of stories, but we like them, even the initially obnoxious Evan. HAUNT does make a point of demonstrating that everyone in the group is concerned for each other, even though a few of our heroes wind up demonstrating resilience that would make Jason Voorhees proud. Chaney Morrow does a particularly good job of making us uneasy as one of the haunt’s chattier hosts.

There is a nicely mythic tinge to both the placement of the haunt and the goings-on within it. The filmmakers also deserve kudos for getting a lot done on what looks like a low budget. A few tweaks to the script would have wrought some improvements, but mostly HAUNT delivers on its premise.