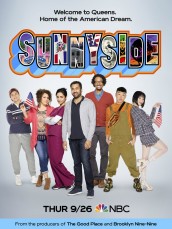 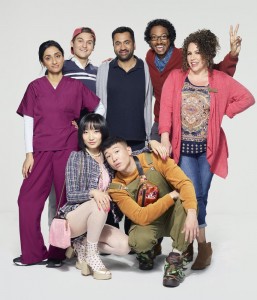 NBC’s new Thursday-night comedy SUNNYSIDE takes its title from the New York neighborhood where it is set (although the series is shot in Los Angeles). Kal Penn stars as Garrett Modi (Penn’s real last name), a disgraced former city council member who seeks redemption (and income) by helping a disparate group of immigrants help study for their U.S. citizenship exams.

Penn created SUNNYSIDE with fellow executive producer Matt Murray, whose other credits include writing/producing on THE GOOD PLACE, BROOKLYN NINE-NINE, PARKS AND RECREATION, and COMMUNITY.

Murray participates in a Q&A panel for SUNNYSIDE, then takes time for a one-on-one follow-up conversation.

ASSIGNMENT X: How did you and Kal Penn get together as writing partners?

MATT MURRAY: We’ve known each other for a long time. I used to write for SATURDAY NIGHT LIVE, and I wrote with Andy Samberg and the Lonely Island guys, and he knew them from school, so I would see him around at various things, so we’ve known each other for awhile, ten-plus years, probably. [The conversation about SUNNYIDE began] about a year and a half ago. We were talking – he had this idea that I was like, “Oh, my God, I immediately see this idea, this is a great idea, I’d be honored to help you with it if you want me to help.” And we just started working on it.

AX: While Kal Penn is also known for drama and for real-world political work – he was in the Obama administration for a few years – in the comedy space, he’s still largely known for Kumar from the HAROLD AND KUMAR movies. So did you shade Garrett at all with an eye towards, “Okay, he got to be a successful politician for awhile, but at heart, he’s kind of a slacker character who likes his weed”?

MURRAY: Not the weed so much. He was a partyer. When we were talking about the character, I remember we talked a lot about Anthony Weiner, [but] not the creepy parts. Early career. When he first came on the scene, I was so into him. I was so into him. I was like, “This guy is great. He’s strong. He fights back. He’s on TV a lot.” And then you’re like, “He’s on TV a lot. You gotta go work, man. Get off TV.” So we thought about a guy who got infatuated with the spotlight, liked all the trappings of power, but didn’t actually want to get his hands dirty and do the work of being a politician. So a guy who coasts on that for a long time, then has a downfall, and then realizes he has no skills to do anything else, I think that was the area we were going for.

AX: Did you speak at all with Sunnyside’s current city councilman, Jimmy Van Bramer?

MURRAY: We did. We had him Skype into the writers’ room, and he sat with us for a couple of hours and answered all of our questions, gave us the lowdown on what’s happening in the neighborhood, and what his job is day to day. It was really informative and helpful. He’s great.

AX: Did you have particular nationalities in mind for Garrett’s students, or did you audition people and then start crafting the characters to suit the actors?

MURRAY: We definitely wanted to have people from all over. That just makes it better, I think. So we wrote the script first. And then we auditioned people. And then we did make changes after we saw certain auditions, where certain characters were maybe written as being from a different place. If we saw an actor that we really loved, we were like, “Okay, we can go back and change that to fit their character.” Because one thing we didn’t want is to have anybody playing that they’re not. We don’t want to have people putting on funny accents that they don’t have. We’re trying to keep that part authentic.

AX: What kinds of stories will you be telling over the course of the season?

MURRAY: In the second episode, we’re trying to just set the show up to be what it is, which is, he’s going to be helping them learn how to become citizens and get through the process, but also just help them adjust to life in America. So every episode’s not going to be a history lesson, or a civics lesson. It’s going to be stories about people being new to this country, and sort of guiding them through that. Also, in the first episode, a character gets taken by ICE, and we have to follow that up. We’re not just going to leave him in the wind, so we need to follow that story, and we have plenty of things to follow. 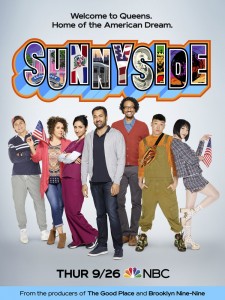 AX: The wealthy siblings played by Poppy Liu and Joel Kim Booster do not look a great deal like each other. Are they going to turn out to be half-siblings?

MURRAY: They are half-siblings. They have a very mysterious father, they have different mothers, there’s a whole back story there that we’re going to explore in, I think, the fifth episode.

AX: Why did you decide to set it in New York, but shoot it in Los Angeles?

MURRAY: We got out to New York for a day of shooting. It was just a logistical thing, it was easier to shoot stuff here.

AX: L.A. is a pretty diverse city. Did you want to not set it here because of our proximity to the southern border and some of the more immediate issues that raises?

MURRAY: Not so much. It was more, I lived in New York for eight years when I first graduated from college, and there’s something about New York that’s everyone’s sort of living on top of each other, and people are sort of forced to be mixed up and interacting with each other in a way that they’re just not here. And Sunnyside in particular, as a neighborhood, it’s not sort of partitioned. There’s not a Chinatown in Sunnyside, there’s not a little Bangladesh thing. There’s a Romanian restaurant, next to a Mexican restaurant, next to an Irish pub, next to a Chinese restaurant. It’s all very mixed together, so I think that added to it.

AX: A lot of the news about immigration today is not especially funny. How do you find and craft stories that work as comedy?

MURRAY: Well, one good thing that we’ve tried to do is, our entire writing staff, with the exception of one person, is either an immigrant themselves, or a child of an immigrant. So we are just getting real stories of the process. [Immigration] is an infuriating process. It can be very frustrating. It can be very difficult, but we are trying to tell a bunch of different stories around the subject. It’s not one specific to everyone. So we are just trying to tell real stories about people who have gone through it and, yeah, there is comedy to be mined.

AX: Are all of Garrett’s citizenship students immigrants as opposed to refugees?

MURRAY: Yes. We’re trying to of show immigration as not being this monolith. So we’re trying to tell as many different stories as we possibly can. So yeah, we are interested in telling those stories. We’re in touch with Amnesty International. We want to get those stories. The key is just finding a real story that resonates, that we can make funny. There’s not a ton of hilariousness happening all the time with refugees, so we want to make sure we treat it sensitively when we do it. There are no plans in the first few episodes, but it is certainly something that we want to tackle.

AX: What happens when Garrett’s students pass their citizenship tests?

MURRAY: I mean, that’s a question for Season 6 or 7 [laughs]. It’s a process that can take years. So we are going to take our time telling that story.