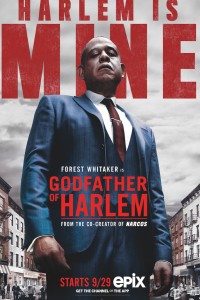 Epix’s new Sunday-night series GODFATHER OF HARLEM chronicles the life and times of Ellsworth Raymond “Bumpy” Johnson, played by Forest Whitaker, during the 1960s. Bumpy was a fascinating, paradoxical real-life figure, a gangster who not only kept order but actually helped the citizens in his Harlem neighborhood. More, Johnson had people like black revolutionary Malcolm X (played in the show by Nigel Thatch) and Baptist pastor/congressman Adam Clayton Powell Jr. (played by Giancarlo Esposito) in his circle.

GODFATHER OF HARLEM creators Chris Brancato and Paul Eckstein (also creators of the series NARCOS) had dealt with Robinson’s story before in the 1997 feature film HOODLUM. Brancato had written the screenplay and both he and Eckstein were co-producers on the film, which starred Laurence Fishburne and explored Robinson’s earlier exploits in the Harlem of the 1930s.

Eckstein, an executive producer with Brancato on GODFATHER OF HARLEM, talks about the new take on a complicated subject.

PAUL ECKSTEIN: We’re not doing a history class, this is not doing a documentary. But my greatest hope is that everybody who watches our show, particularly the kids, go off and go, “Huh. [Robinson knew] Adam Clayton Powell. Wow. I didn’t know he did all that. I’m going to read the autobiography by Malcolm X. I’m going to go find out who this guy is, and what they were about.” Suddenly, this is an inspiration for history, for people doing their own pursuit of what the truth was. The same with NARCOS. Chris and I did NARCOS together, we did the first year, and we were so meticulous, as we were on this show about research, about interviews with people – we constantly talked to Bumpy’s granddaughter. We talked with the real Mayme Johnson [Johnson’s wife, played in the series by Ilfenesh Hadera], and other people who knew him, worked for him, were part of this. They were around us all the time. So when we talk about the history, it’s grounded in a reality of many people’s visions, and many people’s experiences that they related to us.

One of our great consultants was a guy named Professor James Smalls, who, besides being the head of the African-American Studies program at City College for ten years, was also Malcolm’s wife’s bodyguard, and knew Malcolm and knows his brother and his cousin. So we’re getting this input about the show that’s coming from people who know Johnson. They’re not telling us what to write, they’re giving us their experiences of the time and place, and allowing everybody here to take with them. The last thing I wanted to say was, what’s amazing about this show for me as a producer and a writer how many people have personal connections to this man, how many times a p.a. has come up to me on the set and said, “Hey, you know, my father was a fireman, and Bumpy helped all these firemen who got burned in the hospital, and he paid for all their medical bills.” All the time, people had these connections to this man as being this real influence in the community that I come from. And I know that there are a lot of people who are going to be like, “All right. I see what you all are doing.” Because this is an important story, it’s an iconic story. He represents a lot of what the African-American experience was in the twentieth century. And so it’s really important that we get it right. And I think we have.

ASSIGNMENT X: Someone said that Bumpy Johnson is a very iconic figure in hip-hop. Why him particularly?

ECKSTEIN: He was an ultimate O.G., original gangster. He was a Robin Hood, he did look out for his people, so he was spiritually and morally evolved. His dedication and understanding of having to give back was a part of what gave him that iconic status, and ultimately, that’s what a lot of rappers and a lot of hip-hop people are about. They’re like, “Hey, this is our culture, we want to spread it and we want to help it, and still be outside the law, still be a hood, still be tough, still be scary, still be masculine and intimidating, still be someone who could battle the oppression that African-Americans experience every day, but have a heart.” And Bumpy was one of the truest ones of that. I got into this story – Bumpy Johnson put my grandmother through college in the ‘40s, so I would hear stories growing up about this man my whole life. And my grandmother would always say that Harlem became a ghetto when he died in ’68. Before that, it was a community. Yeah, there were drugs, yeah, there were problems, yeah, there was crime and so on, but there was a guy there who kept it all in place. You know what I mean? He was the one who had that moral high ground standing that allowed the people there to feel like they had somebody on their side.

AX: Did you come into GODFATHER OF HARLEM going, “All right, here’s the crime side of the story, here’s the politics, here’s the religion,” or …?

ECKSTEIN: Here’s where it started for me. When I had heard that Bumpy Johnson was tight with Malcolm X, when I heard that they would get together on Sundays and play chess together, that Bumpy’s granddaughter would talk about how they would have these Sunday gatherings, and he was there all the time. Then I found out that Bumpy paid for Malcolm’s funeral. And we found more research and discovered that he was really involved in Malcolm’s security once he left the Nation [of Islam], and there was a lot of turmoil and drama personally around that, but clearly, they were friends. And in many ways, Bumpy is the one who ran Malcolm out of Harlem in the ‘40s to begin with. So there’s this, “Wow, what were those two guys talking about, Malcolm X and this gangster?” That friendship is what fascinated and I think what started Chris and I really chewing on what this show could be, was that idea of a gangster and an evolved spiritual activist, how they connected, what they argued about. How could Malcolm X be cool with a guy that dealt heroin? That’s an amazing idea when you really start chewing on what that was, and just the complexity of it, and its relevance to our time, so that’s really what started it. 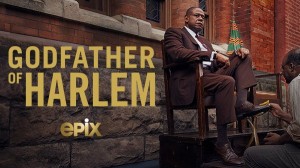 AX: When did Forest Whitaker come into the project?

ECKSTEIN: Well, two of our executive producers are Markuann Smith [who also plays Junie Byrd in the series], who’s from Harlem, and James Acheson. Markuann was really, really close with Bumpy Johnson’s granddaughter [Margaret Johnson]. She was his godmother, I believe. So they came to Chris at first – [referring to HOODLUM] “Ah, we’ve done that story before.” But that aspect of the Malcolm X/Bumpy Johnson relationship, that wasn’t part of the 1930s. And so it started, and then Markuann got us with Margaret, and started pushing it, and that’s when we really realized that, wait, not only is this an incredible story, it’s an incredible story for now. Right now, we need to remember what happened in the ‘60s, what was going on there. So many times I find research, we’ve got an incredible research team, and I’d be like, “Wow, look at this speech from Stokely Carmichael.” But we need to change the date and the location, and you’re talking about right now.

Forest came in with Jim and Markuann. When he saw what we had and read the script, he was all in. Here’s the thing. Having Forest Whitaker with you, you can’t get any better than that. It’s the biggest blessing – I’m the most blessed writer in Hollywood. I have the Man, the actor of actors, coming to work every day. And when he sets that bar up here, everybody else is right there along with him.

AX: Nigel Thatch, who plays Malcolm X in GODFATHER OF HARLEM, had previously played Malcolm X in the film SELMA. Were you thinking, “Okay, we really like what he did with Malcolm X in SELMA, so let’s just bring him back,” or …?

ECKSTEIN: No. Actually, when you’re casting an iconic figure like that, everybody knows, we saw a lot of really talented cats for it. And everybody has a different take, some of our other executive producers were like Nigel [for the role] from Day One. [My take] was how he was always searching for it. Nigel was never doing a character. He was always living this idea that this human being just changes every second. And the way he approached it, and the way he was able to take advantage of Professor Smalls and the other aspects of research, was really the right choice. He showed that he’s not just doing an impersonation, he’s living a character that’s in our show. I can’t wait until next year – oh, my God, ’64. Just wait.

ECKSTEIN: I mean, I have an early one. I’m doing another show for this fabulous studio, Disney, that’s an adaptation of a book called IN SEARCH OF US. So hopefully next year, we’ll be doing that, IN SEARCH OF US, a coming of age story of biracial women in two different time frames. I’m doing that at ABC Signature as well, with Yara Shahidi as an executive producer, so we’ll see.

AX: And what would you most like people to know about GODFATHER OF HARLEM?

ECKSTEIN: That it’s definitely the most engaging and entertaining, but maybe the most important show you’ll see this year.

This interview was conducted during Epix’s portion of the Summer 2019 Television Critics Association (TCA) press tour.