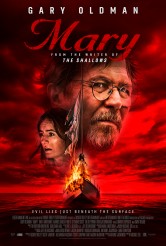 Unimaginative but okay horror with a couple of high-grade perks 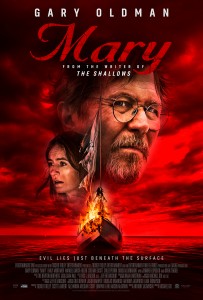 MARY in many respects resembles a lot of other modest horror films, with two big differences. One, it’s shot on actual film, which gives it a much crisper, richer look than many of its peers. This makes sense, as its director, Michael Goi, is an award-winning cinematographer, who also serves in that capacity here. Two, MARY stars Gary Oldman and Emily Mortimer, actors whose big-name stature suggests there will be more here than we actually get.

The filmmakers unwisely give the game away at the outset with a rhyme about a witch drowned at sea who subsequently steals the children of sailors. It’s not hard to guess the broad strokes from here.

We know from the outset that there’s been a maritime disaster, because there’s black smoke billowing from a drifting sailboat. Then we cut to an interrogation room, where the distraught Sarah (Mortimer) demands to see her daughters. The investigator in charge (Jennifer Esposito) first wants to know exactly what happened.

In flashbacks, with occasional voiceover narration from Sarah and cuts back to the interrogation, showing how Sarah’s fisherman husband David (Oldman) is drawn to purchase the sailboat Mary, which shares a name with the couple’s younger daughter (Chloe Perrin). The craft boasts a striking, ancient-looking figurehead on its bow, which may be hundreds of years old.

Sarah is not thrilled with David’s impulse buy, as he was supposed to get a tour boat instead. She’s even less happy when she learns that the boat has apparently lost three full crews at sea, including the sailors’ children. David thinks Sarah is falling prey to superstition. He insists that the family, including teen daughter Lindsay (Stefanie Scott), plus two crew members (Manuel Garcia-Rulfo and Owen Teale) chart a course that takes them out to sea.

Alabama stands in for the Jacksonville, Florida port where MARY starts. Production values are good, and director/cinematographer Goi gets some striking shots of the harbor seen from a distance, beautiful vistas of black and silver. He also stages some decent jump scares.

However, the script by Anthony Jaswinski is devoid of humor or narrative surprise. There theoretically could be some mileage in the fact that Sarah sounds like a lunatic while the audience knows she’s right, but the scenes are played as straight marital discord. Oldman and Mortimer give it their all (with American accents), but there isn’t much they can do about the lack of any subplots or misdirection, to say nothing of actual suspense.

MARY is a more handsome than we might expect of a horror movie of this caliber. It should be okay for viewers who are satisfied with call and response storytelling, but its good looks don’t make up for its ultimate lack of imagination.