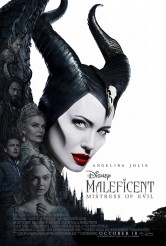 Reasonably enjoyable, if a little repetitive 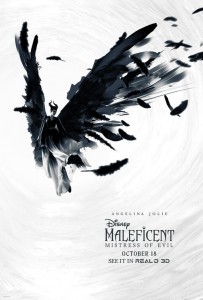 MALEFICENT: MISTRESS OF EVIL is a sequel to 2014’s MALEFICENT, the revisionist version of SLEEPING BEAUTY. Angelina Jolie stars in both films as the title character, a dark faerie who, in the first movie, took righteous wrath a little too far.

In MALEFICENT: MISTRESS OF EVIL, Maleficent is still the faerie godmother of Princess Aurora (Elle Fanning), who has recovered from the curse bestowed on her as a baby. Aurora is now a young woman, happy in her godmother’s kingdom on the moors, where all manner of magical beings live in harmony with one another.

Unfortunately, harmony doesn’t extend to the border of with the human kingdom of Ulmstead. In the movie’s opening minutes, we see faerie being kidnapped out of the moors, while some human intruders are killed. So there’s tension on both sides.

Even so, Ulmstead’s Prince Phillip (Harris Dickinson, taking over in the role from the first movie’s Brendan Thwaites), who has been courting Aurora for the five years since we’ve last seen them, decides it’s time to propose marriage. Aurora knows Maleficent won’t be pleased, and she isn’t. Prince Phillip’s parents, King John (Robert Lindsay) and Queen Ingrith (Michelle Pfeiffer), on the other hand, are positively delighted with the match. Aurora is lovely, plus she’s heir to two kingdoms, Maleficent’s and her own. (We learn that Aurora hasn’t been back there since the epic battle that climaxed MALEFICENT).

There’s a meet-the-parents supper at Ulmstead Castle, where we see beyond all doubt that Queen Ingrith is vehemently anti-faerie. The meal ends in misunderstanding, manipulation and disaster. Soon both Aurora and Maleficent are forced to choose sides in a conflict larger than either knew was possible.

MALEFICENT: MISTRESS OF EVIL does several things with ease. It first of all provides the flying queen vs. smug queen smackdown that some viewers may have been hoping to see in another series that tilted in this direction before doing something else entirely. (No, MALEFICENT: MISTRESS OF EVIL doesn’t have the time or the depth to provide similar buildup, but given those limitations, it fills the bill handily.) Most viewers will agree this is a good thing.

MALEFICENT also manages to treat its male characters, from growling warriors to near-saints, as individuals who can be helpful and charming, or stubborn and dangerous, but who are all essentially pawns and support for the real (female) power players. The script by Micah Fitzerman-Blue and Noah Harpster and Linda Woolverton, from Woolverton’s story, doesn’t underscore this point, but it’s unusual enough to be noteworthy. There is a weird sort of tradeoff towards the end that may or not be related to this, but it can’t be discussed without getting deep into the spoiler weeds.

Given both the trailers for MALEFICENT: MISTRESS OF EVIL and what we know of the character Maleficent, it’s perhaps not a spoiler to say that the title should more properly be MALEFICENT AND THE MISTRESS OF EVIL. Maleficent is once more a maltreated heroine, whose capacity for rage is surpassed by her nobility of spirit. Jolie, in prosthetics that convey a nice sense of otherworldliness without going to far, gives the character passion, humor and a startling sort of innocence. She is capable of being deeply hurt and of experiencing true joy. We enjoy spending time with her, and want to see what she’ll do next. 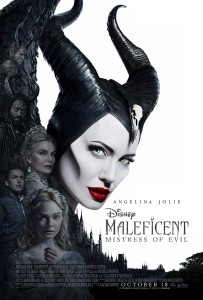 No prizes for guessing who the real Mistress of Evil is here. Pfeiffer plays the queen with firm conviction. Fanning has warmth as Aurora, and Jenn Murray has impact as the queen’s quiet henchwoman.

Chiwetel Ejiofor takes what should be an impossible-to-play role (his Conall basically flies and spouts exposition) and makes him intensely sympathetic, and Lindsay’s King John pitches his well-intentioned, clueless character as someone we actually like.

Director Joachim Ronning and the movie’s design team come up with some remarkable visuals, including some logical notions about the looks for characters from different regions. This makes MALEFICENT: MISTRESS OF EVIL consistently attractive. It’s also reasonably enjoyable, even though it lags in a few places and recycles some themes from its predecessor without adding much that’s conceptually new.