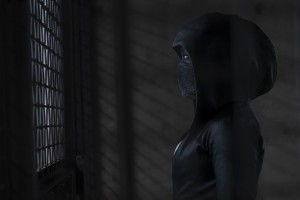 HBO’s new series WATCHMEN premieres on Sunday, October 20. Developed for television by Damon Lindelof, WATCHMEN is essentially a sequel to Alan Moore’s 1987 graphic novel of the same name (as with other adaptations of his work, Moore has disavowed the TV follow-up). In WATCHMEN, Moore created an alternate history where Nixon never resigned, and costumed superheroes exist but are outlawed. Some go to work for the government; others go into hiding; still others become vigilantes.

The WATCHMEN series is set thirty years after the events of the graphic novel. Regina King plays Angela Abar, who is part of a police force that conceals their faces in masks for fear of retaliation against their families. Among the threats that Angela and her colleagues are dealing with is a white supremacist group that has adopted the disguise of the late vigilante known as Rorschach, whose intentions they have adapted for their own violent ends.

King just won the Supporting Actress Oscar earlier this year for her performance in IF BEALE STREET COULD TALK. She has also won three Emmys for her work in a limited series or movie, one in 2018 for the miniseries SEVEN SECONDS, and two, in 2015 and 2016, for portraying two different characters in separate seasons of AMERICAN CRIME.

Los Angeles native King previously worked with Lindelof in his series adaptation of THE LEFTOVERS on HBO. King’s other high-profile credits include BOYZ N THE HOOD, JERRY MAGUIRE (as the Cuba Gooding Jr. character’s wife), HOW STELLA GOT HER GROOVE BACK, FRIDAY, SOUTHLAND, and THE BIG BANG THEORY.

ASSIGNMENT X: Were you familiar with the WATCHMEN graphic novel before you got involved in the series?

REGINA KING: I was not. I’m one of those people that was just introduced to the world, because Damon introduced it to me, so I had no expectation of, when I was reading it, for it to be a certain thing, when I read the pilot. 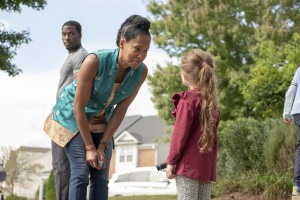 AX: Was the draw here for you the character, the project, or specifically working with Damon Lindelof again?

KING: All of the above. I will say that, because I did not know anything about the graphic novel, I did not know what I was reading when I was reading it, but once it was explained to me, that made it even more exciting, that this was something that’s been beloved by comic book fans forever, since it’s been out, and a lot of our crew members were huge fans of the WATCHMEN book. So I felt like Damon made sure, and [executive producer/director] Nicki [Kassell] made sure, they assembled a team that loved the work that we were doing, and also were big fans of where the project was adapted.

AX: Is WATCHMEN your first deep dive into the superhero world?

KING: Yes, it is. And I think, I hope, that people watch it and, as Damon said, allow it to be its own story that was inspired by and honoring the original idea.

AX: So this is sort of a sequel to the original WATCHMEN …

KING: I guess it’s that if you want to call it that. Because it’s definitely not an adaptation.

AX: Is your character, Angela Abar, in the original graphic novel?

KING: No. That releases a bit of the anxiety when you’re going in, doing a project that has such a huge fan base, that you don’t have to feel like you have to really be under a microscope when it comes to how you are portraying that character that they love so much. But some of the other actors have that pressure.

AX: Do you have a lot of input into the character of Angela?

KING: Sure. Damon has a vision for who Angela Abar is, and I think, as with most writers, once they hire the actors, the actors sometimes inform the way the story plays out.

AX: We see in the opening episode that Angela is married with young children. Do you think Angela sees herself, at least at the beginning, primarily as a family person, or primarily as a police operative, or …?

AX: Is this the most physical role you’ve had?

KING: Yes, absolutely. One hundred percent. I feel like [playing a police detective] on SOUTHLAND, I may have done more running, but this one was still a lot of running, but in addition to the running, it’s a lot of physical stuff, learning more choreography, because there are fight scenes. Fight scenes are choreographed.

AX: Angela has a long cape and what looks like a complicated costume. What is the degree of difficulty of running in that outfit?

KING: A lot of falls, a lot of falls. Running and fighting in that outfit, myself and my stunt double definitely, in rehearsals, we would put on the skirt when we were rehearsing, just so that we could try to make it fail-proof, but there are some spills on film.

AX: Earlier in the day, it was said of WATCHMEN that appearances are deceiving, and our first impressions of some people may not be correct. But we’re not ever going to be meant to sympathize with the Rorschach-worshipping white supremacists, right?

KING: I think anyone that sympathizes with anyone that is filled with hate, no matter if you’re a white supremacist or whatever, that would be someone’s own individual perspective that they walked away with that has nothing to do with us. But I can definitely say without feeling like I’m getting in trouble with HBO [regarding spoilers] that there is no intention, never been a plan, for the audience to sympathize.

KING: I feel like I’m working on so many things. I’m directing my first film. It’s my theatrical film [directorial] debut, called ONE NIGHT IN MIAMI, so that’s pretty exciting.

AX: And what would you most like people to know about WATCHMEN?

This interview was conducted during the Warner Media/HBO party for the Summer 2019 Television Critics Association (TCA) press tour.