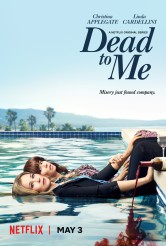 DEAD TO ME: Creator Liz Feldman on Season 1 of the Christina Applegate dramedy – Interview 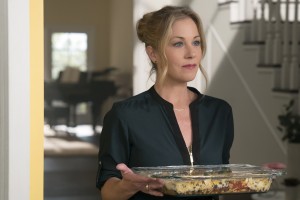 DEAD TO ME, now streaming its entire first season and renewed for a second on Netflix, is a complex dark comedy. Widowed Jen Harding (Christina Applegate, who received an Emmy nomination) and Judy Hale (Linda Cardellini), who has lost her fiancé, meet in a grief support group and become close friends. But there are a few secrets that greatly complicate the situation.

Liz Feldman created and serves as show runner on DEAD TO ME. Feldman previously created the NBC comedy ONE BIG HAPPY, and served as a writer/producer on series including ELLEN: THE ELLEN DEGENERES SHOW, HOT IN CLEVELAND, 2 BROKE GIRLS, and THE GREAT INDOORS.

Feldman is part of a Q&A panel called “Impact Storytelling,” sponsored by CBS, with three other creators and/or show runners (Michelle King from CBS All-Access’s THE GOOD FIGHT and CBS’s EVIL, Corinne Kingsbury from The CW’s IN THE DARK, and Michelle Paradise from CBS All-Access’s STAR TREK: DISCOVERY). On the panel, Feldman discusses DEAD TO ME; afterwards, she remains for some follow-up conversation.

Explaining her creative process for the series, Feldman says, “With DEAD TO ME, I didn’t set out necessarily to create a show that would fit into the traditional comedy mold. I wasn’t trying to create the next thing that I could sell. It honestly came from an authentic place of needing to tell this particular story, to tell a story about loss, to tell a story about fertility struggles, basically as my own form of therapy. That’s essentially where the seed of the show comes from.

“And then I wanted to focus on the power of female friendships. When I think about the women in my life, the kind of woman I am, and hope and strive to be, these are women who are multilayered. They are flawed. The kind of women that you can both want to be friends with and also abhor, to straddle the good and bad that’s in all of us, and I think also, because I wasn’t necessarily trying to create the next great comedy. I come from a comedy background, but I allowed myself to think outside of the genre a little bit, and to essentially create something that I think is sort of genre nonconforming. I wanted to tell stories that don’t have to just be like the funny version of this, but also show how I see life. The show is very much told from my lens, which is that I see life as sometimes funny and sometimes tragic, and sometimes things will happen, and if I wrote it down, I don’t think anybody would believe me. I view life as funny and dark and absurd and heartbreaking and heartwarming, and all of the things, hopefully, that’s what you feel when you watch DEAD TO ME.” 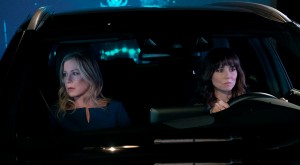 Exploring tragedy through humor comes naturally to Feldman. “I think because I’ve been a comedian my whole life, I can’t help but look at things when I’m going through them, no matter how difficult, no matter how painful or traumatic. My automatic response to pain is humor. I think it’s a human response. I think it’s a healthy response, actually, to dealing with trauma, is to immediately try to relieve the intensity and the pain by laughing. I think that is an actually healing thing to do. As my wife and I were going through our fertility struggles, you literally can’t make this up – we had done an egg retrieval, and the doctor called to say that they lost the egg. It was the only one, and they lost it, like, dropped it on the floor. I literally turned to my wife, and I was like, ‘It’s like they know I’m a comedy writer’,” Feldman laughs. “It’s like they’re begging me to talk about this. So when things like that happen, my first response is to see the funny story in it. So I think I always saw that there was humor in death, in grief, in loss, in fertility struggle. It’s a defense mechanism, but it’s also a connection mechanism, and I think when we start to laugh about difficult things, we start to connect. And that’s what I was interested in with these two women, with Christina and Linda and Jen and Judy, that they had a point of connection through laughter, and it was the first building blocks of that bridge between them.

“And obviously, being able to work with actresses like Christina Applegate and Linda Cardellini and the actor James Marsden, I’m very blessed that they bring such humanity to the roles that they play. Humanity and authenticity is what I was really striving for, more than just making something funny, more than making something that might make you cry. I just wanted you to be able to watch something that you related to, even though the situation itself might not be something that any of us have lived through.”

LIZ FELDMAN: Neither one. I literally wasn’t trying to do a certain genre. I was just trying to tell a story about these two women in this situation, and once you see the end of the pilot, something is revealed that makes you think, “Oh, I thought I was watching one thing, and it’s actually something else,” and like I was saying, that is really how I experience life. Just when you think you’ve got it all figured out, some left turn will happen. I never set out to write a murder mystery, and I don’t consider this a murder mystery. 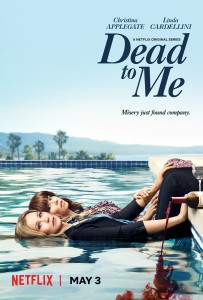 FELDMAN: [laughs] I didn’t set out to write characters as myself, or base them on other people. I realized that, as I was writing the pilot, Jen and Judy were both an aspect of me. There are certainly characteristics about them that I have drawn from women I know and love, but in the core, I really relate to them both, and they sort of represent my duality.

AX: Is it different doing a series for a streaming service rather than a broadcast network?

FELDMAN: Yes. It’s very freeing to not have to worry about teeing something up for commercial to lure an audience to come back. That is a manufactured way of telling a story. That is not necessarily how a story would unfold if you were telling it from a very grounded, natural place. So I find it’s a totally different process, and it’s very freeing and I think allows for a way in which DEAD TO ME uses, sort of, our surprises are twists and turns. I don’t have to think about it in terms of, “Well, it’s ten minutes in.” I just get to do it as it would actually happen and where you would want it. I think that that’s why the show is entertaining, is because it’s not falling into that same formula that we are so used to as an audience.

AX: What has been the biggest challenge for you so far?

FELDMAN: [laughs] In life, or on the show?

AX: If you’re willing, both.

FELDMAN: I think the biggest challenge that I feel right now is the pressure to deliver a great second season. I’m thrilled with the reception for the first season. I never in a million years would have guessed that it would have the viewership that it has. Coming from network TV and the comedy world, we’re not used to being celebrated in really any way. So my biggest challenge is just delivering a really satisfying season. Right now, my biggest challenge in life is maintaining my humanity while being a show runner.

AX: How is that working out?

FELDMAN: I think it’s working out pretty well. I’m extremely lucky in that I surround myself with incredible human beings, and I’m married to a wonderful woman, who definitely keeps my moral compass on track.

AX: We know that as the creator, you obviously create the show, but can you explain what you do as the show runner?

FELDMAN: It’s eleven jobs in one. We are the head writer, we are the executive producer, we are the decider, we are the hirer, and we are essentially the arbiter of the show. We are the purveyor of everything you see. So it’s generally, at least in my case, I can only speak for myself, the show represents my vision, it represents my ethos, so there’s a lot of responsibility, and it’s making a thousand decisions a day, hoping you’re right.

AX: And what would you most like people to know about DEAD TO ME?

FELDMAN: What I’d most like people to know? That it’s a really entertaining show to watch, and it might just make you feel something.

This interview was conducted during the Summer 2019 Television Critics Association (TCA) press tour.

Article Source: Assignment X
Article: DEAD TO ME: Interview with creator Liz Feldman on Season 1 of the Christina Applegate dramedy

Exclusive: The scoop on why OBLIVION was dropped by Disney according t...
The CW renews SUPERNATURAL for a Seventh Season and THE VAMPIRE DIARIE...
CD Review: SECRET SHARER soundtrack
TV Review: SUPERNATURAL – Season 13 – “Devil’s Bargain”