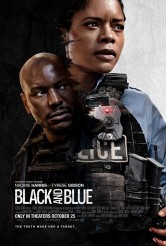 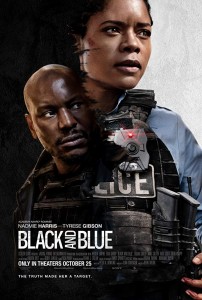 In broad strokes, we’ve seen BLACK AND BLUE before. Good cop stumbles upon criminal activity by bad cops and winds up running from both fellow police officers and civilian gang members. However, the good cop in BLACK AND BLUE is a black woman, Alicia West (Naomie Harris). Alicia was in the U.S. Army for eight years. She’s returned to her old neighborhood, New Orleans’s mostly impoverished Ninth Ward, hoping to make a difference by joining the police force.

Three weeks into her tenure as a rookie, Alicia volunteers for an extra shift so her regular partner Kevin (Reid Scott) can have some personal time with his wife. Alicia is paired with veteran Deacon Brown (James Moses Black), who makes the mistake of thinking his rookie is just going to sit in the car while he does who knows what in a ruined building. What happens next is captured on Alicia’s body cam. Learning quickly that she can’t trust a large portion of her coworkers in blue, Alicia’s status as a police officer creates hostility in the local black population, who see her as “them” in an “us and them” scenario.

BLACK AND BLUE doesn’t quite get its underlying theme to work. The Ninth Ward, as depicted here, is so inhospitable that it doesn’t seem like Alicia would be able to get much help even if she were out of uniform. The screenplay by Peter A. Dowling, under Deon Taylor’s direction, also hits the ground running with such speed that there’s not much time to set up what seems to be the intended tension between Alicia’s background and her job.

This aside, though, BLACK AND BLUE is nimble and fast-paced. We believe Alicia can handle herself, and Harris’s tough but feeling persona in the role makes us care about her. Frank Grillo as Alicia’s primary adversary is cool, capablie and pragmatic. Mike Colter, who often plays righteous heroes (Luke Cage and his current exorcist role on EVIL), has an expansive blast as a brutal but family-loving drug kingpin, and Tyrese Gibson is grounded and contained as a grocery store employee and old acquaintance of Alicia who is very reluctantly dragged into the mess.

Director Taylor eschews the New Orleans trappings that often find their way into movies. There are no Mardi Gras or French Quarter tourist flourishes here. Instead, we get working-class neighborhoods, solemn graveyards, and poverty-stricken tenements, where graffiti murals provide all the color. Taylor mixes handheld and tracking shots for an added sense of urgency, so that we feel like we are running with Alicia.

BLACK AND BLUE builds to an impressively large-scale, ambitious climax. If the film doesn’t entirely explore all of its possibilities, it still gives Alicia her say. More than that, it’s a propulsive thriller that never questions its convincing female protagonist’s abilities or her worth.