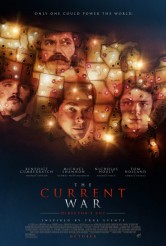 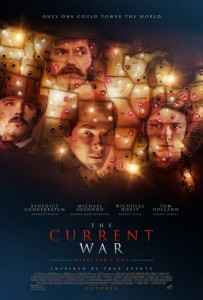 Two things should be made clear about the title of THE CURRENT WAR: DIRECTOR’S CUT. The first is that it does not refer to a present-day conflict, military or other. Instead, it alludes to the war over actual electrical current, fought in the last decades of the nineteenth century between the inventors Thomas Edison (played here by Benedict Cumberbatch) and George Westinghouse (Michael Shannon), with some input from Nikola Tesla (Nicholas Hoult).

The second thing is that “Director’s Cut” suffix, which normally comes upon re-release. October 25, 2019 is THE CURRENT WAR’s first commercial release. The film was completed in 2017, and release held up in the wake of problems with its then-distributor, The Weinstein Company. Apparently, a different cut of the movie played at festivals, and director Alfonso Gomez-Rejon wants to make it clear that this is his version. While a desire for clarity is understandable, the “Director’s Cut” tag may make a number of potential filmgoers wonder how they missed it the first time around, taking attention away from THE CURRENT WAR itself. This would be too bad, as it’s both entertaining and informative.

There are no exact villains or heroes here. THE CURRENT WAR begins in 1880. Edison is first to invent the light bulb, powered by direct current, or DC. Westinghouse creates a similar electrical light source that works on alternate current, which can be spread further and more cheaply. Both men are devoted to their respective supportive wives (Tuppence Middleton as Mary Edison, Katherine Waterston as Marguerite Westinghouse). Edison is more personally famous, Westinghouse is more financially successful and (at least as depicted here) easier to work with as a human being.

Edison comes to believe that Westinghouse is copying his work, which may or may not be true, depending on perspective. Both men are vying for the honor (and money) of having their electricity light up the 1893 World’s Fair. Increasingly desperate to discredit Westinghouse, Edison embarks on a course that has deep ethical ramifications.

Watching THE CURRENT WAR, we realize that Michael Mitnick’s screenplay probably could have chosen any number of incidents to give the story shape. He uses the one that has the highest immediate stakes, without hammering it too hard. Mitnick also is judicious with his use of scientific information. He uses enough to make us feel like we’re in the presence of committed inventors, and that we’re actually learning something, without causing us to get lost in jargon.

Director Alfonso Gomez-Rejon creates a darkly beautiful visual palette, and at the same time sets a snappy pace. We get lovely shots, but they always service the story and the emotions. He’s also very good with his actors.

Cumberbatch, often cast for his ability to project great intellect, uses this to effortlessly persuade us of Edison’s genius. We credit his loving and brusque qualities, and his American accent never falters. AVENGERS fans may be amused to see Tom Holland as Edison’s loyal right hand, the quick-witted but usually quiet Samuel Insull. (For the uninitiated, Cumberbatch plays Dr. Strange and Holland is Spider-Man in those films; they have some charming scenes together there.)

Shannon, who often plays intimidating villains, here is a hearty, sensible and sensitive soul as Westinghouse. He seems canny without being shady, solid without being ruthless. Hoult has fun with Tesla’s sincerity and eccentricity. Middleton is deeply affecting as Mary Edison, and Waterston gives personality to a lightly-written role. Matthew Macfadyen does well as the put-upon financier J.P. Morgan.

THE CURRENT WAR: DIRECTOR’S CUT evokes sympathy for all of its characters, even while it prompts us to ask ethical questions. It does many things that we hope movies will do. It entertains us, moves us, makes us think, and has us leave the theatre wanting to learn more about its subjects without feeling we’ve been cheated.