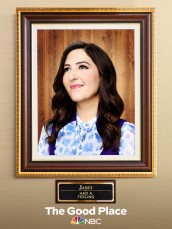 THE GOOD PLACE: D’Arcy Carden chats about all things Janet and the final season – Exclusive Interview 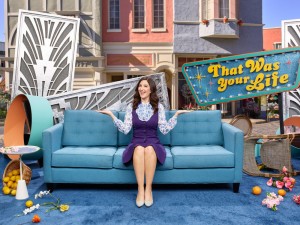 THE GOOD PLACE, the NBC comedy now in its fourth and final season on Thursday nights, may be the most arced half-hour on network television. Created by Michael Schur, THE GOOD PLACE started as what seemed to be a story about one woman, Eleanor Shellstrop (Kristen Bell), thinking she’d mistakenly been sent to the Good Place (i.e., Heaven) after death. Spoiler alert: it turned out that Eleanor was in an experiment of the Bad Place, run by the demon Michael (Ted Danson). Over three seasons, Michael, Eleanor and Eleanor’s three fellow experimentees – philosophy professor Chidi Anagonye (William Jackson Harper), celebrity Tahani al-Jamil (Jameela Jamil), and small-time, very naïve young Florida criminal Jason Mendoza (Manny Jacinto) – have evolved into better people. They have all banded together to try to prove that the point system that deposits everybody into the Bad Place is unfair.

Helping everyone with everything is Michael’s quasi-artificial intelligence assistant, Janet, portrayed by D’Arcy Carden. Janet is capable of conjuring up a neighborhood in the blink of an eye. She’s also able to fall in love, as she did with Jason (they’re currently on the outs, because Janet is also capable of stress). In one memorable Season 3 episode, “Janet(s),” Janet briefly embodied each of the other human characters. In this reporter’s opinion, Carden should have received a Featured Actress Emmy for that alone.

Carden, a California native, has worked with the theatrical improvisation troupe Upright Citizens Brigade (aka UCB). Her other film and TV work includes a current recurring role on HBO’s BARRY, about a hitman (played by co-creator and Emmy winner Bill Hader) who takes acting classes, BROAD CITY, UCB COMEDY ORIGINALS, and RHONDA CASTING.

Carden, creator Schur and the rest of the cast are on a Q&A panel for THE GOOD PLACE. There are many questions directed at the entire cast, so Carden’s replies are intermingled with those of her colleagues.

Asked about which cast member tends to cause the others to laugh uncontrollably, there seems to be consensus: it’s Jacinto. 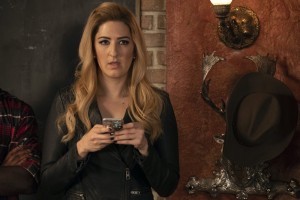 Carden agrees. “Manny makes us break [up] a lot. After he does something, once they yell “Cut!”, we often say, “Why did you do it like that? How did you think of that?”

Schur reveals, “Without giving away what it is, our blooper reel for Season 4 is about ten minutes long, and, not a joke, three-and-a-half minutes of it are one line that Manny had in one scene, and the rest of the actors trying to survive it.”

Asked what they’ll take away from THE GOOD PLACE, Harper first jokes, “The cash.” More seriously, he says, “First off, I feel like Ted and Kristen set a tone. There are no better artists to lead your show. And I see what it is to live in a place of gratitude for the chances that we’ve been given. So I think, coming away from the show, I can only hope, no matter where I am on the call sheet going forward, that I can promote the same atmosphere that these two so generously gave us. I feel like there are no people on this planet that are as generous and professional and talented as these two. So I’m going to take that away more than anything else.”

“This was my first-ever audition,” Jamil relates, “so I didn’t know what to expect of a TV show, full stop. I hadn’t been an actor, and I got to learn from the most talented people I’ve ever met, and I got to be on a show with Mike, so I think one of the things I learned is, never make a show without Mike. So I’m probably here to retire,” she quips. More heartfelt, she continues, “I can’t imagine finding an environment where I feel so safe, so respected, so part of something real. That exists amongst [all the crew] who make our show, and all around, it’s the most extraordinary experience. It exists on-screen and off-screen, the environment that you see, the chemistry that you see.” 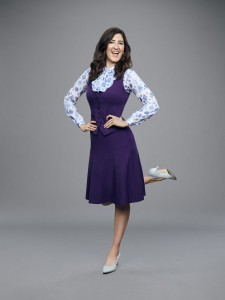 Carden agrees. “I don’t think I can say it better than Will said it. We got the best possible leaders. Just seeing that it is possible to make something that you’re so proud of, and that people seem to like, and the on-set environment can be the way it is because of Ted and Kristen, and because of Michael Schur, and then also because the heads of every department in our entire crew are as good as these guys. You have no idea how good it can be until you experience it, and then you kind of don’t want to do anything less.”

Jacinto contributes, “Just to touch on what D’Arcy and Jameela and Will said, I think it goes with not only your demeanor on set, but also your demeanor off set. They lead great lives outside of just this whole acting world, and it’s something to aspire to and reach for, whether they be involved with their families or humanitarian work. It makes me question how useful of a human being I actually am.”

Carden laughs at her friend’s pronouncement of doom, then finishes, “Hopefully, that sprinkles down onto us, and we take that into whatever we are so lucky to get to do next. It sounds like we’re exaggerating, but you guys, it really is that good. It really, really is.”

Once the Q&A ends, Carden makes herself available for a little more discussion of THE GOOD PLACE.

ASSIGNMENT X: First of all, when it comes to the Emmys, you was robbed.

AX: Second of all, when you did the “Janet(s)” episode, how long did it take you to figure out how everybody else played their characters, and how to do play each of them in a way that would read, but not seem like the way English actors do Sean Connery impressions?

CARDEN: I talked a lot about it with Mike Schur, and Morgan Sackett, the director, and we just thought we wanted to try to really stay away from what you said, Sean Connery impressions, or a real, full impression, more just a vibe or just a taste of what the person is, the small inflections in their voice and the way they stand, but not trying to do a pitch-perfect impression. And I’ve worked with these guys for years now, so it was kind of in me anyway. I think any of us could do that. We all know each other so well. 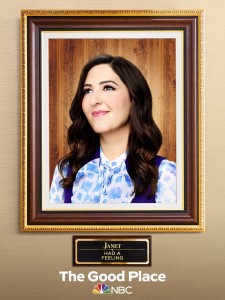 AX: Kristen Bell was crying through most of the Q&A panel you all just did. What are your thoughts on the final season and what all of you are going through?

CARDEN: It’s been really bittersweet. It’s been really sad. We just wrapped this week [this interview was conducted on August 8, 2019], and my eyes are still puffy with tears, and we’ve been crying a lot, and happy. It’s this perfectly little magical cast and crew and group of writers, and I think everyone’s very aware of how lucky we’ve had it. So there is this weird feeling of like, “Okay. This is not just a show ending, this is not just a job ending, this is something that has really impacted our lives in a very positive way in the last four years, and it’s going to be sad to end it.”

AX: Do you feel it’s almost like a person passing?

CARDEN: Yeah, I do. I keep thinking of it like a relationship, like an amicable breakup, something like that. You’re going to be in each other’s lives still, but you’re maybe just not going to be married now. I mean, the fact that this show would affect someone like Ted [who also got emotional on the panel], or someone like Kristen, or someone like Mike, that have been part of these other great shows, and that this one would even be in the running for something that made them feel something, yeah. I mean, yes, for Manny and Jameela and Will, are we sad that this is ending? Of course. But to see Kristen, and to see Ted, and to see Mike, and to see the writers feel like we’re really losing something, it brings it home a little harder.

CARDEN: [“Satisfied”] was the word I was about to say. I think if you’re a fan of the show, and you’ve been watching it, and you’ve been on this journey with us, I can’t think of a more satisfying way this show would end. And as much as I wanted a fifth or sixth season, when Mike told me what this season, and what the end would look like, I had no pushback, because I was like, “That is a perfect ending.”

AX: What can you tell us about your work on BARRY?

CARDEN: Yes. I love that cast, and Bill Hader is a genius, and getting to be even a small part of that show has been so rewarding and exciting.

AX: You work with Ted Danson on THE GOOD PLACE and Henry Winkler on BARRY …

CARDEN: Not too shabby, right? But also, Ted Danson and Henry Winkler are legends. If they were kind of jaded or kind of jerks, it would be like not that surprising. But instead, they are two of the most wonderful people I have ever known, and ever worked with, and are friends for life. Between BARRY and between THE GOOD PLACE, and also BROAD CITY, I have gotten to work on three of the nicest sets that I think are possible. And it’s really kind of scary to see what’s next, because it’s not all like that.

CARDEN: I’ll do the next season of BARRY, and I’ve got a couple fun movies that are going to be happening in the next year [per IMDB, one of these is BOMBSHELL, with Charlize Theron and Margot Robbie, but just keep working. I love working.

AX: And what would you most like people to know about THE GOOD PLACE?

CARDEN: Other than what you see on the screen? Or if they’ve watched it or not? For me, I always say, “If you haven’t watched it, I guarantee you, if you watch through the first season, you will want to keep watching.” And I know that a lot of people have now watched it. But when people watched the pilot, or the first couple episodes, and they thought, “Ah, it’s cute,” I’m always like, “You’ve got to keep on. Just give yourselves one season, and you’ll be hooked.”