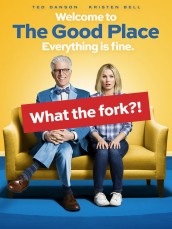 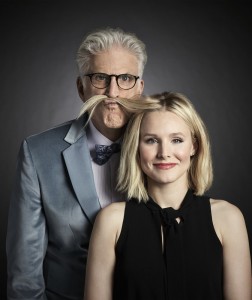 THE GOOD PLACE, per NBC’s new Thursday-night comedy – which has a special premiere on Monday, September 19 – is where you go after death if you’ve been a wonderful person. Turns out that, in life, humans are graded by deed, and only the top percentage make it here. How good is the good place? So good that Ted Danson in his most kindly mode plays Michael, the being in charge. Kristen Bell plays Eleanor Shellstrop, who actually wasn’t so good while alive. She’s here through a clerical error, but now desperately trying to be good so no one finds out and sends her to the Bad Place.

Directing the pilot for THE GOOD PLACE is a departure for Drew Goddard. For one thing, Goddard is primarily known as a writer (he was Oscar-nominated for his adapted screenplay for THE MARTIAN and created DAREDEVIL; other credits include the film CLOVERFIELD and the TV series LOST, BUFFY THE VAMPIRE SLAYER and ANGEL). Goddard’s previous foray as director was on the film CABIN IN THE WOODS, which he co-wrote with Joss Whedon. However, Michael Schur (who also created PARKS & RECREATION and BROOKLYN NINE-NINE) devised THE GOOD PLACE and wrote the pilot, so this is the first time Goddard has directed something he has not written.

ASSIGNMENT X: Have you ever wanted to do a comedy before this, or were you just attracted to the subject matter?

DREW GODDARD: Yeah. It’s the subject matter and the people. I’ve always been attracted to things that are hard to classify, I suppose. Going back to BUFFY, it was always, “Is this a comedy, is this a drama, is this a horror show?” If you look at everything I’ve done, they’re all hard to classify. I never really see a difference. Other people do, but I just go with who I’m inspired by. I’m inspired by Mike Schur, I’m inspired by this cast, and I love the idea.

AX: Do you say to yourself, “Wait, there isn’t a big chase and I don’t have to choreograph a stunt or figure out where the blood cannon goes”?

GODDARD: Well, what’s fun about it, and you certainly see it in the pilot, we definitely get to do some fun things visually, we get to do some stuff that’s a little different, and that was very attractive to me. I mean, the rules of the show allow for a director to stretch his muscles, which was very much an appeal for me. And also just to work with this cast.

AX: As the season goes on, is there an opportunity to go to some quasi-dark places, if only in a Frank Capra IT’S A WONDERFUL LIFE way?

AX: Since people get into the Good Place on a points system, can you earn points once you’re dead? Can you mess up so royally that you get thrown out, not as a clerical error, but because you’ve been a jerk?

GODDARD: That is a question that I think we would like to explore [laughs].

AX: Are there animals in the Good Place, and if so, do they get there the same way that the people do? Is there such a thing as a “good” dog?

GODDARD: Again, that’s a question worth exploring that we’ll have to get to.

AX: Are you in the writers’ room for THE GOOD PLACE?

GODDARD: No. I pop by and occasionally they’ll tell me what they’re thinking, and I’ll say, “That sounds brilliant.” But it’s been really fun for me to not have to worry about the writing. It’s been really fun to just worry about the directing. I didn’t expect that to be the case. But quite frankly, it’s because I believe in Mike so much, and the scripts are so wonderful, that it’s fun to just go execute them.

AX: How do you and Mike Schur collaborate? How did you develop your creative relationship?

GODDARD: Mike and I both sort of came up around the same time. He was doing SNL right when I was doing BUFFY, and then he was doing THE OFFICE when I was doing LOST. We sort of knew of each other. Certainly LOST and THE OFFICE, we always had tables next to each other at events. I met my wife there – my wife worked with Mike. So we’ve sort of always known each other and been fans of one another, and it’s just always about finding the right fit. I never want to be some place that I’m not going to be helpful. And on this project, when Mike pitched it to me, I went, “Oh, this is in my wheelhouse. This feels like the type of stuff I’m attracted to, I think I can help there.” And then we just had so much fun doing it that we both looked at each other and said, “Let’s keep doing this, let’s just keep working together.”

GODDARD: I think what’s hard – as a writer, you always hear a certain version of it in your head, because when you write it, that’s just what happens in your head. And that’s very dangerous when you’re directing. One of the things that I do when I’m directing something that I’ve written is, I try to step away from the script long enough that I forget how the writer thought it should be, and just focus on the reality of what the director wants to do. And this has been really good for that, because it allows me to just take the script and say, “Okay, let’s see where this takes us. Let’s let the actors come to it. Let’s let these brilliant actors show us what they’ve got. Let me figure out the visuals and trust that Mike’s got the script and the structure in hand.” Because he does.

AX: Can you give us a status report on your next project, which is another project from Ridley Scott, who also produced and directed your script for THE MARTIAN?

GODDARD: Yes. I’m adapting a book written by S. Craig Zahler called WRAITHS OF THE BROKEN LAND. It’s a Western. It’s a wonderful book. I would highly encourage people to read it, because Craig is a brilliant writer.

Profile: CHUCK star Zachary Levi gets TANGLED up in Disney’s latest an...
The Dork Side: Fox goes on a TV show killing spree and Bristol Palin g...
Exclusive Interview: BEING HUMAN stars Sam Huntington and Kristen Hage...
THE HOBBIT THE DESOLATION OF SMAUG Highlights this week in Blu-ray, DV...