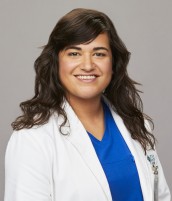 The actress plays a resident on the new Patricia Heaton comedy 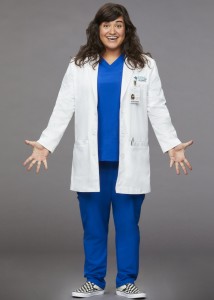 Sabrina Jalees plays Lexie Gilani, one of Carol’s fellow residents. Jalees has a background in standup comedy. Originally from Canada, Jalees previously performed in and wrote for THE BARONESS VON SKETCH SHOW, and was a writer on the series SEARCH PARTY, BIG MOUTH, POWERLESS, and THE MAYOR. Working on this last one, Jalees met fellow writers Emily Halpern and Sarah Haskins, who would go on to create CAROL’S SECOND ACT.

Asked at a Q&A panel for the series if she has any interesting real-life stories about dealing with doctors, Jalees offers, “My wife gave birth last year. And she is a wardrobe stylist. She loves to wear a ton of rings. The doctor went, ‘Girl, take your rings off.’ She’s like, ‘It’s fine, it’s fine.’ Cut to New Year’s Eve of this year, the clock is striking midnight, and her fingers are just blown up. So we go to this hospital, Good Sam downtown, and this guy shoved this tool under her finger, and he just leaves it there to go deal with another patient. It’s like he’s the worst doctor you would ever want to deal with. And then there was this older, wiser fireman, straight out of SEX AND THE CITY. He was cute. His name was Aidan. He just wound the [tool] up and cut the ring off. It is wild when you deal with the medical system. You’re so vulnerable. It really was like he was a fantasy.”

Afterwards, Jalees discusses CAROL’S SECOND ACT one on one.

ASSIGNMENT X: You do standup, but before being cast in CAROL’S SECOND ACT, were you primarily a writer?

SABRINA JALEES: Yes, a hundred percent. I got this show because I was in the writers’ room with Emily and Sarah, they were writing [CAROL’S SECOND ACT], and they said, “We have a part that we think you’d be great for, so come by and audition.” And the odds of being on this stage [at the Television Critics Association press tour], talking about a show getting made – they’re so small, and I know it as a writer, because as a writer, I actually sold a show to Fox that I wrote, it was being produced by Diablo Cody, and that was like a dream. So that last cycle, I had known the pain of a show that you write not making it. And so [CAROL’S SECOND ACT], I was like, “Oh, my God, I might get to shoot this pilot.” And then, “Oh, my God, the pilot might be a show.” And now here I am, talking to you, golfing with Patty Heaton – life is a dream.

AX: Are you a writer on CAROL’S SECOND ACT as well as being a series regular in it?

JALEES: I’m not, but because it’s multi-cam, I’m allowed to pitch alts [alternative lines]. On the night, I can kind of switch it up, and that was really fun with the pilot, trying different lines and working with the writers, and also, that they know me as a writer, and empower me to pitch lines for myself.

AX: Is your character Lexie a doctor?

JALEES: My character is a doctor. All of us, including Patty, except for Kyle [MacLachlan]’s and Ito [Aghayere]’s characters, we’re all first-day doctors and residents. So we’re just trying to make it through the day and not kill someone. Comedy needs stakes, and what bigger stakes are there than life or death?

AX: What is the balance on CAROL’S SECOND ACT between just friendly human interaction and medical drama/comedy/anything?

JALEES: The balance between the medical stories and the character stories? I have a feeling, because Sarah and Emily are super-funny, and to me, the funniest things come from real stories, real-feeling characters, characters that are living stories that are like, “I know that feeling, I’ve been through that.” So I would assume that a lot of the real meat is going to come from character-based stories. And then at the same time, I learned how to put in a catheter on set [laughs], so there will be some medical stuff. 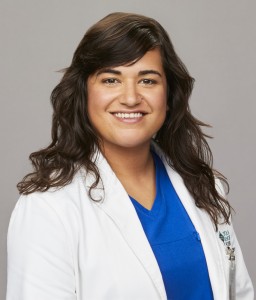 AX: I’m assuming they didn’t actually give you a live human to do the catheter on, so what was your training like?

JALEES: They had a doctor on set, and they tell you what the order of things are. It’s a whole other thing that you memorize. Because I’m a standup comic that ended up in a writers’ room, who somehow ended up in front of camera, and it’s all like a dream to me. So I’m learning these lines, and learning lines is a new thing. And I’m also memorizing the lines of what a procedure is. There is an importance to doing it correctly. But the long and the short of it is, you stick the pointy part right into the needle part.

AX: Besides the catheter, was there anything you had to learn in order to play a doctor convincingly?

JALEES: I think just being chill on set and not freaking out. Because I’m a fan of Patty’s. My first spec script was modeled after EVERYBODY LOVES RAYMOND [which starred Heaton]. I loved watching that show, and it really is, be cool, just be chill.

AX: What is Lexie’s relationship like with the Carol character?

JALEES: I was playing it pretty close to me. This is not something that I’m advertising, but I’m not a super-trained actor, I’m just playing myself. This character is very much like me, and the way that Lexie feels about Carol is probably like, she’s this badass lady that Lexie would like get closer to, learn from, and hang out with, and maybe jump in her pool.

AX: So Lexie has a lot of respect for Carol …

JALEES: I think the first day, all the respect in the world is not going to put you in the crosshairs of Dr. Maya Jacobs [played by Ito Aghayere]. That’s the boss. But my character definitely felt bad for Carol as she was raked over the coals in that pilot. Because Carol really is the doctor that you want when you’re being treated at a hospital. Too many times, I feel, people forget why it is that they started. And Carol, it’s very fresh in her mind and in her heart what she’s doing in that hospital, and it’s helping people.

AX: Speaking of helping people, thanks for standing up and representing for the LGBTQ community earlier at the panel …

AX: Your character Lexie is also a lesbian?

JALEES: Yes, my character is very gay. There’s a moment in the pilot where Patty’s [character’s] daughter walks in, and the guys are kind of razzing her about wanting to date her, and I kind of take this feminist approach of, “You guys are pigs,” and immediately turn it to [Carol], and I’m like, “I’ll date her, Carol.” So it’s a nice moment. That feels really nice, that that was written in, and not in this sort of movie-of-the-week style that I grew up watching, which was, “I’ve got this dark secret that I’ve got to reveal.” It’s just like, “I’m gay in my life, and I’m gay in this show, and it’ll weave its way into stories.” But I don’t think it needs to be much like in my real life. It’s not this big dramatic thing that being gay was built up to be on TV when I was younger. It’s this character-enriching thing.

AX: Most TV has definitely improved its handling of LGBTQ characters and storylines …

JALEES: Well, I started doing standup when I was sixteen, and I’m thirty-four now, so I have seen things change within the comedy circuit, and certainly within just the world. My son is a year-and-a-half now, and I’m so excited that he’s going to grow up in a time and a place where there’s not really a pressure on his gender or sexual identity. He can find that on his own, and feel what feels good.

AX: Is CAROL’S SECOND ACT something you would start letting him watch as soon as he’s able to watch TV …?

JALEES: Yeah, I think so. To me, based on the pilot, unless they take a real hard turn towards R-rated, which I don’t think would happen on CBS, I think it is a show that the whole family can sit down and watch, and there’s a character for everyone in that family.

AX: Where do you do standup primarily?

JALEES: I do standup all over the city, all over L.A. Now that we’re shooting, it will be primarily L.A., but I travel all over. I did Seattle Pride. I’ll go where they’ll have me.

JALEES: L.A.-based, yeah. I’m originally from Toronto, Canada, and then moved to New York about ten years ago, and moved to L.A. about four years ago.

JALEES: Starring in a multi-cam on CBS has definitely been my preference [laughs]. The snacks are the best, the attention is [great]. I’ve got a team of people doing my makeup. It’s really like I slipped and feel and won the lottery, and all of a sudden, here I am in the Capitol. But really, with multi-cam, something that surprised me was, because of the direction TV is going in, with these artistic single-cam shows, I never really fantasized about a multi-cam. And shooting the pilot just felt so right, because I had trained for the moment before you hit the crowd, and breathing, and hitting your mark, and saying your line with standup. And then, with writing, I understood the construct of a show. There’s something beautiful and very theatre-like about a multi-cam. So being able to be completely a fish out of water, and at the same time be like, “You know, this water takes kind of familiar.”

AX: So performing for multi-cam has that performing in front of a live audience aspect …

JALEES: Yeah. It’s a perfect blend of everything I’ve been preparing for my whole life.

JALEES: [joking, laughs] Patty and I are releasing an album together. It’s mostly hip-hop, with a little bit of R&B. [serious] I am writing a movie right now that’s about the process of making Wolfie [Jalees’ son]. Our donor was my surf instructor in Mexico. So it’s kind of a romantic comedy, based on finding that person.

JALEES: I would like people to know that it’s a funny show with heart, I’m on it, and I’m a big get, so tune in.