The actor chats about the Netflix dramedy 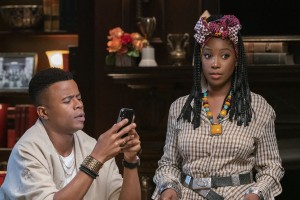 DEAR WHITE PEOPLE, the dramedy based on the 2014 film of the same name, is currently streaming its first three seasons on Netflix, with a fourth and final season set for 2020. Created by Justin Simien, who also wrote and directed the feature, DEAR WHITE PEOPLE takes its title from the fictional Winchester University’s college radio broadcast hosted by Samantha White (Logan Browning in the series, Tessa Thompson in the film), targeting everyday racism.

Marque Richardson created the role of student and aspiring poet Reggie Green in the DEAR WHITE PEOPLE film, and reprises it in the series.

Reggie has been through a lot. In Season 1, campus police drew guns on him, a trauma that follows him throughout the series. He’s had his share of romantic turmoil. And in Season 3 of DEAR WHITE PEOPLE, Reggie believes that a professor he admires, played by Blair Underwood, is being slandered by unfair accusations.

Richardson, originally from San Diego, California, has had roles in films including STEP SISTERS and DATING DAISY, and regular roles and/or arcs on TV series including THE NEWSROOM, TRUE BLOOD, MY ALIBI, and TELL ME YOUR SECRETS.

While Season 3 of DEAR WHITE PEOPLE is still in production, we catch up with Richardson in the set for the Winchester campus radio station, where he and costar John Patrick Amedori (who plays Gabe), among others, are hanging out with reporters, plus an adorable dog named Billy Dee.

MARQUE RICHARDSON: We finished a scene, so it’s a little tough.

AX: Can you say what the scene was about?

RICHARDSON: I will say love lost.

AX: What is Reggie’s relationship like with the very elaborate DEAR WHITE PEOPLE set? Do you feel any ownership of this set?

RICHARDSON: Absolutely. I feel like a janitor, and I know every nook and cranny, and every corner, and every piece of this, every shortcut to get back to the trailer or to get to lunch quickly, I know how to get there [laughs].

AX: Do you have any input into the writing of Reggie? What are your conversations like with the writers, the show runner?

RICHARDSON: For myself, dialogue-wise, if there’s something that feels unaligned, then I’ll say something, but otherwise, everything is pretty on point with what Justin and the writers have created, so kudos to them. 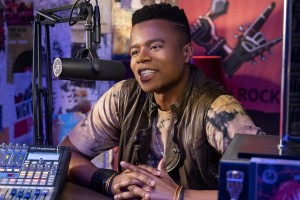 RICHARDSON: Oh, my goodness. So many things, so many layers. I’ll say Season 3 has been interesting in regards to remembering what happened. Also, it just adds so many layers into what’s happening. Reggie is always going through some sh*t in Season 1 and Season 2. Season 3 is no different. And I think this time, we get a chance to explore the variance of his life and his emotions, if that makes sense, a complete one-eighty from the beginning to the end.

AX: Do you feel like DEAR WHITE PEOPLE is addressing issues the same way or differently this season as it did in previous years?

This interview was conducted during Netflix’s set tour for DEAR WHITE PEOPLE for the Television Critics Association (TCA) press tour.