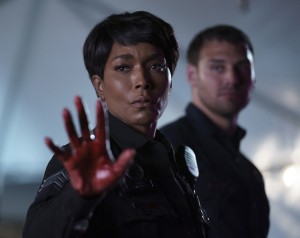 The first responder drama 9-1-1 begins its third season Monday nights on Fox with most of its characters in a good place. Angela Bassett’s LAPD Sergeant Athena Grant married her fire captain beau Bobby Nash (Peter Krause) at the end of Season 2, with her two teen children from her first marriage in attendance. 9-1-1 being a show about people in crisis, everybody’s cheerful mood may not make it through the first episode.

However, Bassett’s positive attitude seems likely to last much longer. Also an executive producer on 9-1-1, Bassett (who was an Oscar nominee for her portrayal of Tina Turner in WHAT’S LOVE GOT TO DO WITH IT, a five-time Emmy nominee for a variety of projects, and reprised her BLACK PANTHER role as Wakanda queen mother Ramonda in AVENGERS: ENDGAME earlier this year) is happy to talk Season 3, along with everything else she’s been doing lately.

ASSIGNMENT X: Going into your third season with 9-1-1, are you enjoying executive-producing? Is that what you imagined it would be?

ANGELA BASSETT: [laughs] Well, I’m enjoying myself. Yeah, most definitely, in terms of story, and directors, and casting, and just having more of an input, absolutely. Where I can. I only serve where I can, but where I can.

AX: Were you part of deciding that Athena and Bobby should get married?

BASSETT: You know, absolutely not [laughs]. That was the other executive producer [series co-creator and show runner Tim Minear]’s input there. He’s also the writer. But maybe it was personal. I thought, after a year and a half, maybe it’s a little too soon. We could’ve pushed it off maybe a little bit more, but I’ve never executive-produced a series before, and maybe after a season and a half, it’s just fine timing. 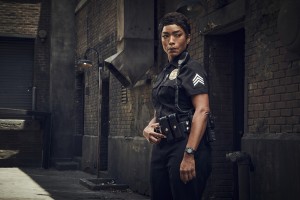 AX: Do you like the way Athena’s work-life balance is being depicted so far?

BASSETT: So far. I think she’s there for her kids, and they know it. We’ll see what happens with the new marriage and how he feels about it, but he also is a first responder, so I think he gets it. And as a fireman, they’re both gone for a couple of days at a time also. So I think she married someone who gets what she does, so that’s not going to be an issue. It’s like an actor marrying an actor, maybe [in real life, Bassett is married to actor Courtney B. Vance]. They have a great awareness of what you do, even if it includes love scenes and going away for months at a time, or whatever. But I think so far the work balance, that she’s handling it well.

AX: Awhile back, there was a panel discussion for 9-1-1 when Aisha Hinds, who plays the paramedic Hen, was talking about having been shot in real life. What she said, almost word for word, later turned up in Hen’s dialogue. Have they done anything like that with you, where anything you’ve said or lived through has turned up in Athena?

BASSETT: No, not yet.

AX: Would you want it to?

BASSETT: Not necessarily, not particularly.

BASSETT: Well, I’m working on an animation – it’s called SOUL, and I also did a movie this summer in Berlin entitled GUNPOWDER MILKSHAKE, an action thriller from a female point of view. [The Netflix comedy film] OTHERHOOD just came out [in August], so, so far, so good. And I’m a spokeswoman for American Heart Association/American Diabetes Association, to get out the word in terms of health and those two things being connected. And yeah, that’s it. And of course, on the even more important side, raising two young adults [Bassett’s children with husband Vance].