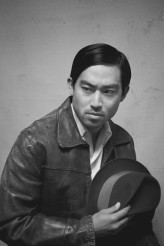 The actor talks his lead role in AMC's unique series 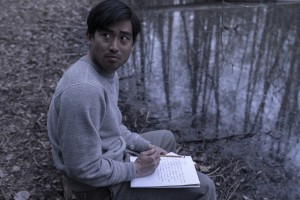 In THE TERROR: INFAMY, Monday nights on AMC, Derek Mio plays Chester Nakayama. Each season of THE TERROR combines an actual historical incident with horror. In Season 2, it is World War II, and the U.S. government is rounding up loyal Japanese-American citizens and putting them in internment camps. Chester’s life as a second-generation American is upended when he, his family and his entire community are uprooted from their home on Terminal Island, off the coast of California, and confined to a camp. Chester is joined there by his pregnant girlfriend, Luz (Cristina Rodlo). Chester comes to believe, with good reason, that something supernatural is stalking the camp.

Mio, originally from Huntington Beach, California, has had experience with both sides of THE TERROR: INFAMY’s subject matter. In DAY OF INDEPENDENCE, THE BRIDGE, and A SONG FOR MANZANAR, Mio played Japanese-Americans dealing with WWII, and in the series SPOOKED, he portrayed a young man dealing with ghosts. Mio was also a series regular in the college comedy GREEK.

ASSIGNMENT X: You’ve been in pieces that dealt with World War II and the internment camps, and you were on a series called SPOOKED, so is THE TERROR: INFAMY sort of a meshing of some of your previous career?

DEREK MIO: I never thought of it like that, but I guess so. Some people have asked if I’ve ever done horror before. I said, “No,” but then yes. SPOOKED was a comedic horror piece, and it was really fun, and it was the first time I got to go to Comic-Con, so to come back with THE TERROR, I  guess it’s coming back to the horror genre, and it’s got a very dedicated fan base. But the very first film I ever acted in, DAY OF INDEPENDENCE, took place in the internment camps. And now here we are, full circle, with a full-length series here on AMC, one of the most prestigious networks in American television. It’s definitely special. This is a special project, for sure.

AX: Were you familiar with THE TERROR before you became involved with Season 2?

MIO: I wasn’t too familiar with it, but one of the first things I did was watch the first season just to see what it was about, and get the tone, and I was immediately hooked into it. The texture of that first season [based on Dan Simmons’s novel about a disastrous real-life 1848 Arctic expedition], the uniforms and the ship and everything, immediately sucked you into that world, and the relationships that are occurring. I just loved the concept of taking a historical event and adding a little supernatural twist to it. There’s that terror, but it’s also the terror that’s occurring between the humans that’s more horrifying. And you definitely get that in our season. And to go with that concept for the franchise, I just thought our season, especially as a Japanese-American, with [real-life] family ties to the internment camps, I just think it’s a brilliant way to combine it all, and to create all these different intersecting layers of terror, between the government and the citizens, between the family and the community and the spiritual figure from Japan. It was great to be a part of. 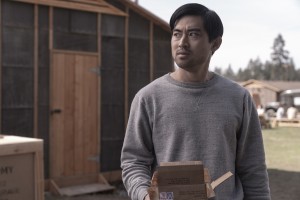 AX: You and many other people involved with THE TERROR: INFAMY had family members who were imprisoned in the internment camps. Your fellow actor George Takei was confined with his family in a camp for part of his childhood and is a consultant on the series. What is it like to work on something that surrounds an event that’s personal for so many people involved in the production?

MIO: It definitely felt unlike anything else I’ve been a part of. This is not another acting job, for me personally. There were a lot of people involved that had relatives who were in the internment camps. So the dedication to getting it right and the authenticity, that just made coming to work every day – you just felt it from everyone, the attention to detail and the commitment to not just collect a paycheck and do a horror show. We’re telling a story of people who were actually affected, and there are certain events and stories that the writers and [co-creator/show runner] Alex Woo took from either George Takei, his experience in the camps. There were some scenes that reminded me of some testimonials that I had read online of my actual family members. In the first episode, we have a scene at the end where the elders of the community are being rounded up by the FBI, and I remember reading about that specific event, where they came and took my great-grandfather away, and my grandfather was pleading with them to take him instead, and so to bring that scene to life was a super-emotional experience for me. Not just me, that was definitely all-around cast and crew. People were very dedicated to doing this series justice.

AX: What can you tell us about your character?

MIO: I play Chester Nakayama, and he is a second-generation Japanese-American, and Chester is dealing with so much. He’s in an interracial relationship with a Mexican girl, and at the time, that was outlawed. And Pearl Harbor happens, he’s being detained, questioned by the government. He’s also got a generational conflict that’s going on between him and his father [Shingo Usami]. His father wants him to take over the fishing business, stay in Terminal Island, but Chester has bigger aspirations. He’s second-generation, he’s an American. He loves baseball. He loves photography. He wants to go see the rest of the country. And so all of these things collide at the exact same time. You throw a spiritual apparition from Japan in there, and it adds a whole other layer to his character. I can’t say too much, but his identity – your very question, who is Chester? – as we peel away the layers throughout the season, that’s really kind of what Chester’s dealing with.

AX: Is Chester sort of the detective character who’s taking the audience through the mystery of exactly what is happening here?

MIO: He’s definitely the vehicle that is taking you on this journey, his journey and the journey of the show, but there are so many things that he doesn’t know, and he’s trying to do whatever he can, and the decisions that he makes are going to have dire consequences. So yeah, he’s the vehicle that you’re going to follow throughout this show, and he’s not always going to have the answers or the solutions. But it’s suspenseful.

AX: To ask a silly question – 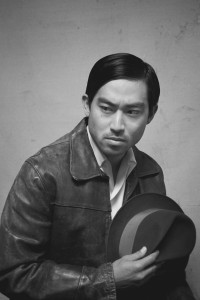 MIO: I just did it for the first time, I think, on one of our earlier interviews. The experience on set with me and George that I can include an impression is, we were on set and I broke, either during or after we cut, I couldn’t help but laugh to myself. I said, “George, I just can’t believe this. I’m sitting here acting with you. You’re George Takei.” And he said [Mio recreates Takei’s signature “Ho-ho-ho”], “Well, you know, someday people are going to say the same thing about you. They’re going to say, ‘I can’t believe I’m acting with Derek Mio.’ Ho-ho-ho.”

AX: What is the relationship between Chester and George Takei’s character?

MIO: Our series starts out in Terminal Island, where my grandfather’s family is from, and so George plays Yamato-san, who is one of the elders, and he works on my father Henry’s fishing boat. So we see George throughout the series as part of that elder generation.

MIO: Vancouver. Which was a challenge, shooting in Vancouver in the wintertime, to recreate Southern California. And we go off [in the story] to other locations and worlds, I’ll just say that.

AX: So your surroundings actually resembled the first season of THE TERROR when you weren’t shooting?

AX: THE TERROR: INFAMY also has a J-horror element. Are you a fan of that kind of horror?

MIO: I’d seen a few, like THE RING and THE GRUDGE and things like that. I tried to watch some other ones online before this. But what’s great is that, before, those movies always got adapted [with mostly white casts]. But to keep it true to the J part of the J-horror, I think it’s pretty groundbreaking to present it [with a mostly Asian-American cast] on a mainstream network like AMC. But it was fun. You see this [unearthly-looking] figure at craft services, and popping out of a trailer [laughs]. Kiki Sukezane [who plays the spirit Yuko] did a fantastic job with it. I think what’s great about this season is, the first season, they had the Tuunbaq, this mythological polar bear creature terrorizing the men. Our season’s figure has an origin story. We get to learn about her desire, because that is a characteristic of a yurei, as we call it, a spirit that’s caught between the present world and the next world. The yurei has a deep, unfulfilled craving or desire or wish, and that’s what’s keeping her around. And they’re going to find out what that is, and how it relates to all the different elements involved. And so there are a lot of different pieces going on in our season, and I think the way that the writers and the whole production team crafted it all together is going to make for some very compelling viewing by the audience.

AX: It would seem impossible to tell any kind of a story when nothing bad is going on in the real world, but this time around, you guys are making a show about internment with current events mirroring that. What’s it like to work on a show that’s set in the past, when the present resembles it so much?

MIO: Yeah. It is, tragically, perfectly timed. But it just shows you, it just reiterates that humans, and the way that we treat each other, it seems to be cyclical. You can go even further back to the first season, and the 1800s. I think it drives it home that it’s hard for us to learn from our mistakes, but I think that’s why we make art.

AX: And what would you most like people to know about THE TERROR: INFAMY?

This interview was conducted during AMC’s portion of the Summer 2019 Television Critics Association (TCA) press tour.