Musical fun with the guest 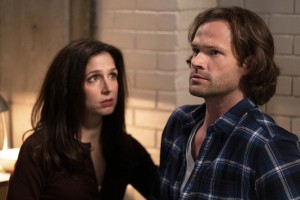 Before SUPERNATURAL ends, it seems like the show is determined to have as many cast members from BUFFY THE VAMPIRE SLAYER and ANGEL guest-star on it as possible. The latest visitor from that august group is Christian Kane – also known for his musical career as a country/rock artist – who appears in the SUPERNATURAL Season 15 episode “Last Call” as Dean’s (Jensen Ackles) old Hunter buddy Leo Webb.

As “Last Call” begins, we’re in Texhoma, Texas, where Angela (Madelyn Grace) is about to give her very drunk friend Sally (Georgia Bradner) a ride home from a bar. While Sally is throwing up behind the bar, Angela and her car are both stolen away. We see that Angela has been tied up in a basement and is having her blood drained while still alive to feed something that looks like a human-sized bat.

Sally, however, tells the tabloids that Angela has been Raptured. Dean, desperate for a case, sees this on the Internet and uses it as an excuse to get out of the bunker. Dean sees sparks between brother Sam (Jared Padalecki) and their guest, newly-resurrected friend Eileen Leahy (Shoshannah Stern), and privately encourages Sam to go for it while Dean is off “going for a drive.” He doesn’t want to tell Sam he’s going Hunting solo. And despite Sam’s protests to Dean, it looks like romance with Eileen is on the horizon. That is, until Castiel (Misha Collins) returns at an inopportune moment.

Sam of course is happy to see Castiel, bad timing notwithstanding. Sam fills Castiel in on the fact that Chuck and Lilith are both back in the picture. Castiel has come up with an idea on how they can track Chuck/God. When Sam shot Chuck with the Equalizer gun, Sam was wounded, too. Castiel thinks Chuck may now have a piece of Sam in him. Castiel tries probing the bullet wound in Sam’s shoulder, which causes a huge glowing flare and renders Sam unconscious. Uh-oh. 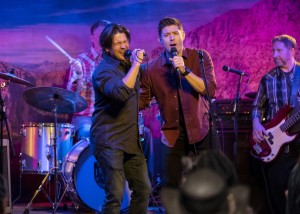 Down in Texhoma, Dean is looking for Sally so he can find out what happened. He is directed to Swayze’s Bar, where owner Leo is onstage with the house band, singing Kane’s rousing “House Rules.” The house rules here are leave cell phones up front, so Dean doesn’t hear/see Castiel calling him about Sam. Leo and Dean are delighted to see each other again. They haven’t since Sam was in college. Leo is sorry to hear John Winchester is dead. Dean says his dad really did like Leo. Leo says he did one last Hunt after the last time he saw Dean, and then hung it up and bought the bar. Dean asks if Leo ever regrets this. Leo says no. Hmm.

Feeling desperate, Castiel calls Sergei (Dimitri Vantis), a shaman who previously sold Castiel some angelic grace that didn’t work. Sergei doesn’t seem to inclined to be helpful now, either, but when Castiel threatens to burn him alive, the shaman sounds more cooperative. Then Castiel calls someone else we can’t see.

At the bar, Leo at first says he doesn’t recognize Angela’s picture. Lorena (Aliyah O’Brien), the flirtatious waitress, says that of course Leo knows Angela, she’s in here all the time. Leo then “recalls” that Angela is the one who doesn’t drink very much.

Dean and Leo reminisce about a song John Winchester used to like. Leo coaxes Dean onto the stage, saying he can’t just lip-sync to “Eye of the Tiger” when nobody’s watching. (Good shout-out to a favorite blooper clip.) So Dean and Leo do a duet on “Good Ol’ Boys,” the DUKES OF HAZZARD theme written by Waylon Jennings. Guess what? Ackles can sing. (In real life, he and Steve Carlson have a band together, Radio Company, that just released their first album.)

When the song is over, a couple of bikers are giving a young woman a hard time. Dean asks politely, the bikers won’t leave, and he and Leo take great pleasure in a quick bar fight that deposits the bikers outside. The young woman turns out to be Sally, so Dean wants to talk to her about Angela. Sally really does believe that Angela was Raptured, and so was her car – “It was a good car.” That a car would be taken to Heaven for being good seems unlikely. Dean asks where someone would dump a car around here. Leo suggests the lake. Lorena suggests the junkyard. Leo offers to help Dean Hunt, so Dean tells Leo to take the lake, and he’ll take the junkyard.

Sergei arrives at the Men of Letters Headquarters. He knows it’s a treasure trove of supernatural objects. Sergei examines Sam and says that Sam’s soul is connected to something or someone outside of himself. Castiel’s probing stretched it – it could snap and kill Sam. Then Sergei does something to make it worse, and tries to extort the key to Death’s library from Castiel. Castiel responds with his own extortion, showing Sergei a picture of a pretty blond girl (presumably Sergei’s daughter) and saying that Castiel’s friend Bobby will kill her at one word from Cass. Sergei cures Sam somewhat – the bullet wound is still there, but Sam is now conscious, having seen some visions of Chuck and Amara.

At the junkyard, Dean finds Angela’s car – and Angela’s dead body in the trunk. Leo gets the drop on Dean and knocks him out. Dean wakes up, tied to the same chair where Angela was held prisoner. Leo explains that he wasn’t lying about how shaken up he was after his and Dean’s last Hunt. He felt a sense of futility. Then he came across the creature he’s got locked up. The creature gives you money and good health in exchange for blood. Dean is furious. Leo isn’t God – “Even God isn’t God.” Leo doesn’t know what Dean is talking about, and he’s sorry it’s going down this way, but Leo will pick himself over Dean.

Leo leaves the room. Dean manages to knock the chair over and pull the blood drain out of his arm, but then the creature breaks down the door to its cell while Dean is still on the floor.

Dean manages to decapitate the thing and tosses its head out into the bar, where Leo is sweeping up alone. Leo tries to shoot Dean. Dean ducks behind the bar and grabs the shotgun there. They both fire until they’re out of bullets. At this point, Leo suggests they both pretend it never happened. Dean can’t do that. “I kill monsters.” Dean and Leo engage in a straight-out fight, until Dean impales Leo with a pool cue. As he dies, Leo asks Dean why he cares so much. Dean replies, “Someone has to.” Dying, Leo pats Dean and says, “I’m glad it was you.” Dean is clearly saddened by the whole business.

Arriving back at the bunker – he finally got Castiel’s messages – Dean is concerned about Sam. Castiel doesn’t want to be alone with Dean. Sam is fine, and thinks he’s seen into Chuck’s head. He believes that Chuck is weak, and that they can beat him. “I think we can beat God.”

Well, there’s an episode-concluding statement if ever there was one.

“Last Call” isn’t the only episode where Dean or Sam has had to kill an old friend, but it may be the one to cram in the most fun. It’s swell to see Ackles and Kane gleefully belting out their musical number, and it’s good to have Cass back. “Last Call” is more icing than cake – nothing really new happens for either Sam or Dean – but sometimes it’s nice to just sit back and enjoy the variations on the theme.