THE PLOT AGAINST AMERICA: Anthony Boyle on the alternate-history miniseries – Exclusive Interview 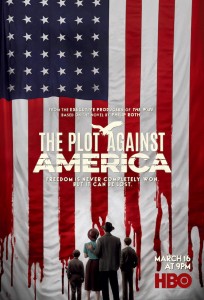 THE PLOT AGAINST AMERICA is a six-part miniseries airing Monday nights on HBO. Adapted by David Simon from Philip Roth’s novel, THE PLOT AGAINST AMERICA is set in an alternate 1940. Celebrity aviator Charles Lindbergh (Ben Cole), a fascist sympathizer and anti-Semite, has been elected President of the United States. Rather than declaring war on Nazi Germany, Lindbergh makes friends with Hitler, blaming Jews for everything wrong in America.

Roth’s novel was published in 2004, but it has timely resonance. THE PLOT AGAINST AMERICA focuses on the Levin family of New Jersey, who are divided on how to view the danger posed by not only the government, but bigots who are emboldened by the rhetoric coming from the top down. Anthony Boyle plays Alvin Levin, who not only takes the threat seriously, but is infuriated and wants to fight against it.

Despite convincingly playing a New Jersey native, Boyle is in fact from Belfast, Northern Ireland. Doyle had a small role in an episode of GAME OF THRONES, and has since appeared in the films THE LOST CITY OF Z, ONUS, and TOLKIEN, and the series DERRY GIRLS, COME HOME, and ORDEAL BY INNOCENCE.

At a Q&A panel for THE PLOT AGAINST AMERICA that includes Boyle and his fellow cast members John Turturro (who plays a pro-administration rabbi) and Zoe Kazan, Morgan Spector, and Winona Ryder (all of whom play Alvin’s relatives), writer/executive producer Simon compliments Boyle’s authentic-sounding accent.

“Anthony, right out of Belfast, never heard the [real] accent but once – you didn’t break the [New Jersey] accent until wrap party.”

“No, I didn’t,” Boyle agrees. “It was very funny, because every time I had to say a Jewish word, I would see David in the corner having a heart attack. And he went up to me once and said, ‘You do know it’s not “El Chame,” right?’ I know that much.”

After hearing Boyle express Simon’s fears of how he would pronounce “L’Chaim,” the writer/executive producer admits, “He caught me once trying to say ‘Belfast’.”

More seriously, Boyle adds, “Being an outsider to this sort of American culture, and Jewish culture as well, and coming in, I was really just trying to be a sponge and just soak up the other conversations [between fellow actors and crew], and then just evolve myself in that sort of rich culture.” 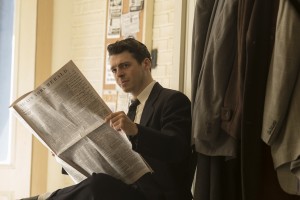 Anthony Boyle in THE PLOT AGAINST AMERICA | ©2020 HBO/Michele K. Short

When the panel concludes, Boyle makes time for more discussion.

ASSIGNMENT X: When you first got the part of Alvin in THE PLOT AGAINST AMERICA, what sorts of research did you do?

ANTHONY BOYLE: I just used the book as a bible. I just went back to that book, THE PLOT AGAINST AMERICA. There are so many great lines in it that just spoke volumes about Alvin’s character. Roth described him as emotionally “one of the rawest of the raw, like an ape that came down from the trees and landed in Newark.” Just so many great quotes that I took and used to form a character from that.

AX: Did you know who David Simon was before all this?

BOYLE: [laughs] I did, yes. I was obsessed with THE WIRE [Simon’s influential 2002-2008 series about criminals, police, reporters, and politicians]. We had to watch THE WIRE at drama school. That was like the pinnacle of what TV was. So when I found out that he was doing the script, I was completely overjoyed.

AX: How difficult was it to do the New Jersey accent?

BOYLE: It was a bit easier because everyone on set was American. It would have been difficult if I was shooting it in Dublin or Birmingham. But I found it easier, because everyone else had that accent to my ears the whole time.

AX: Did you go up to David Simon and say, “How do you pronounce L’Chaim?”

BOYLE: Well, no, I had done that research, but I think he was very, very nervous that I was going to mess it up, but I never did.

AX: What is your character Alvin like? Reportedly, he’s less angry than he was in Roth’s novel …

BOYLE: Yeah. I think Alvin is an idealist. In the book, he’s reading a lot of socialism, he’s reading a lot of communist things. He really wants to rail against the social norms and what’s happening to the Jewish people. He has a real sense of injustice, and he wants to rail against that. And I think that’s the similarities between the book and the piece.

AX: Does Alvin also have a sense of injustice perpetrated towards other groups, or does that even come up?

BOYLE: I think Alvin just has these sort of blinders on. And I think what he’s seeing in the news is the Jewish people being treated so awfully, and he takes real umbrage against that, and that’s his cause.

AX: What would you most like people to know about THE PLOT AGAINST AMERICA?

BOYLE: That it’s awesome, and John Turturro is great in it.

This interview was conducted during HBO’s portion of the Winter 2020 Television Critics Association (TCA) press tour.