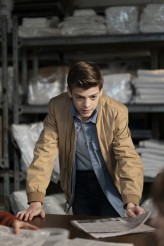 Dean is doubling down on the d-baggery 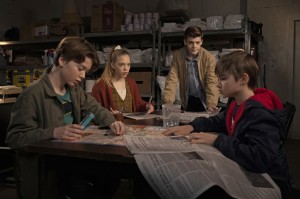 Christian Michael Cooper as Young Sam, Elle McKinnon as Young Caitlin, Paxton Singleton as Young Dean and Liam Hughes as Young Travis in SUPERNATURAL – Season 15 – “Drag Me Away (From You)” | © 2020 The CW Network/Colin Bentley

With this being the fifth-to-last episode of SUPERNATURAL, the episode “Drag Me Away (From You)” naturally … goes back to 1993, where we see the guys as youngsters. This kinda/sorta informs the present, though not as much as it should, giving the timing. The bigger news here is that Dean (Jensen Ackles) is really doubling down on being a jerk.

Unhappy-looking Travis Johnson (Ryan Alexander McDonald) checks into Rooster’s Sunrise Motel after 10 PM. Special request: Room 214. He’s been here a long time ago. Gets into very ‘60s looking room, drinks. He’s trying to convince himself that something wasn’t real. This being SUPERNATURAL, of course it was. A menacing little boy (Liam Hughes) appears to Travis and approaches him with a broken bottle. We hear Travis scream.

Dean and Sam (Jared Padalecki) are on the road, going to check out Travis’s death. They haven’t seen him in twenty-five years, but they’ve got nothing else to do – Chuck is off-world, Jack is in the bunker, and Castiel is off doing something that Sam doesn’t know about. Dean knows and we know that Castiel is off trying to find some way of taking down Chuck that doesn’t involve Jack blowing himself up, but Dean hasn’t shared this with Sam.

Cass even texts Dean, “Did you tell Sam yet?” Sam scolds Dean for texting and driving, and Dean puts the phone away without saying anything about it.

The guys pull up to the motel, neither of them thrilled to return. We flash back to 1993. Young Dean (Christian Michael Cooper) and young Sam (Paxton Singleton) are dropped off here. Young Dean finds Young Sam’s guide book to colleges – it’s his first inkling that Sam may really want out of the family business. Dean scoffs at Sam’s dreams – no college will ever let him in.

In the hideously-wallpapered room where we saw Travis earlier, Young Sam glumly unpacks his revolver and knife, along with his book of colleges. Young Dean gets free candy from the vending machine in the hallway. Here he meets Young Caitlin (Elle McKinnon) and her little brother, Travis. This is the same little boy we saw in the room with adult Travis, but Young Travis seems like a nice, normal kid.

In the present, Sam and Dean find adult Caitlin (Kelsey Crane) in the coffee shop. She is distraught, mourning her younger brother’s death. After “that winter,” Travis had a rough time and became addicted to drugs. He recovered, but then his doctor told him he had to confront his past, so Travis checked into Room 214. Caitlin thinks “she” is back.

In the past, Young Travis tries Young Dean’s Dean’s trick for getting free vending machine candy. An old woman’s hand reaches out of the machine slot and grabs his wrist. Travis yells for help.

In the present, Sam and Dean check Room 214 for ghostly activity. They don’t find anything overtly supernatural, think that maybe Travis killed himself. Nobody else’s prints were found on the broken bottle used to cut Travis’s throat.

In the past, Young Dean tries calling Dad, but he’s out of range. He tells Young Caitlin that he and his dad hunt monsters, and that monsters are real. Anything else weird going on in town? Well, several children have been disappearing for the past few months.

In the present, Dean thinks that Travis was not killed by the monster they encountered back in 1993, because 1) it only preys on kids, and 2) he killed it.

In the past, Young Dean gets Young Sam, Young Caitlin, and Young Travis to look at newspapers, checking for clues. When things point to an abandoned cannery, Young Dean insists on going by himself. None of the others have been on a hunt before. Young Caitlin follows him anyway. 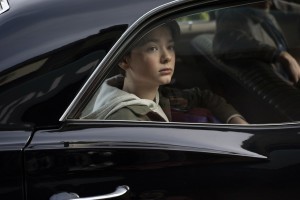 Young Caitlin teases Young Dean that he’s scared as they explore the admittedly spooky cannery. He finds something alarming, but only shows Young Caitlin a key he found to Room 107.

Back at the hotel, Young Sam plays Boggle with Young Travis. Young Travis’s tiles spell out “Sam Kill You Now.” The old woman/ghost/monster appears just as Young Dean and Young Caitlin return. Young Dean stabs the thing, and cuts off its hand, which clutches a gem of some kind.

In the present, Dean is confronted by Young Dean, who tells him that he failed, and that Dean knows what he has to do. Dean kneels down and is ready to stab himself when Sam approaches. Dean snaps out of it and realizes that Caitlin is right, the monster is back.

Dean apologizes to Caitlin for having thought he killed the thing. He obviously feels guilty about Travis’s death. Conferring, they realize that the monster – whatever it is – likes to prolong her victims’ misery by pretending to be other people. Dean also tells Sam and Caitlin about the monster’s nest, where she kept bodies of dead children. At the time, Dean didn’t tell Sam or Caitlin, called the authorities to tell them about the bodies once the monster was apparently dead, and tried to forget about it.

At the motel coffee shop, Dean is confronted by Billie (Lisa Berry), aka Death, who is irritated that he’s working a case when he and Sam should be doing nothing but trying to take down Chuck (God). Chuck has now destroyed all worlds but this one, and he’s coming back.

Dean wants to know how Billie talked Jack into agreeing to die in the course of killing Chuck. Billie says that all Jack wants is Dean’s forgiveness, and Billie told him that, because Jack killed Sam and Dean’s mother (sort of accidentally), the only way Dean will give that forgiveness is if Jack takes out Chuck and frees Dean (and Sam, and everybody) from being prisoners of Chuck’s imagination. Billie asks Dean if she was wrong. He doesn’t answer.

Billie says she’s not in the next part of Chuck’s book, so she won’t see Dean again until the end. She needs to know if they have a problem. Dean says no, he needs Chuck dead. Billie orders Dean to tell Sam about Jack having to blow himself up.

In a different but almost equally tacky motel room, Sam and Caitlin do research (well, mostly Sam, explaining what he’s doing). He comes up with Baba Yaga, a witch who feeds on children’s fears.

When Sam reads that Baba Yaga’s ring is the source of her power, Caitlin realizes that Travis had a ring just like it. Their mom found it in a vacuum cleaner. Travis wore it on a chain around his neck, got it fixed a few weeks before he died. Caitlin storms out of the motel room, finds the chain without the ring in the back of her car. Travis’s ghost appears to her, holding the witch’s severed finger with the ring. Caitlin screams.

In the motel, Dean finds Sam alone in the room, trying to call Caitlin (he’s already checked the parking lot). She’s missing. Sam thinks the Baba Yaga nest is in the motel – this is where all the attacks have happened – so he and Dean split up to search for it.

Sam hears weird slurping noises behind a door – but it’s just the desk clerk with her liquid weed pipe.

Dean checks rooms along the second-floor hallway. The door to Room 214 opens. Dean says, “I’ve seen this movie before” and drills the camera – really? Yes, he does – okay, they know that we know that they know we’re watching a TV show, we’ve got it. Somehow, Dean gets from Room 214 to the motel basement. Dean goes down there. He is confronted by Baba Yaga in the guise of Travis. Baba Yaga/Travis says that, yes, normally she preys on children, but by now, she’s starving.

While Dean and Travis/Baba Yaga struggle with each other, Sam enters Room 214. He sees Caitlin unconscious on the bed, with Baba Yaga in female form standing over her. Sam gets the ring off Baba Yaga’s finger. Now we also see Dean, who was just made to imagine he went into the basement, but was actually still in the motel room (I know, it’s confusing, work with me here). Dean uses the butt of his pistol to smash the ring, and Baba Yaga disappears in a screaming green flash. 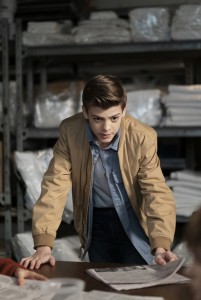 Caitlin thanks Dean and asks if he was scared. He says he always is. Not knowing what Dean is carrying, Caitlin tells Dean that when you get older, you tell the truth more, because you realize lies don’t do any good.

In the present, Dean and Sam are in the car. Sam tries to call Castiel. Dean tells him to hang up. Dean tells Sam that Billie paid him a visit, and that Chuck is coming back. Dean also finally says that Castiel told him about Jack’s impending sacrifice. Sam is furious at Dean, both for not coming clean sooner and for deciding without consulting Sam about what has to happen.

And here endeth the episode.

It’s surprising that SUPERNATURAL has taken this long to get to the Baba Yaga myth (it’s pretty popular as witch stories go), and rather disappointing that we don’t get her chicken-footed house, but it works well enough as case of the week. Cooper does an excellent job of suggesting Ackles’s mannerisms without doing an outright imitation.

However, while Dean commits some sins of omission in the past, they don’t have the same effect as his silence in the present. Moreover, there’s still the huge issue of exactly how they’re supposed to get rid of Chuck without ending all creation along with him.

Even setting that aside, we’re with Sam here. Dean deciding that he personally can’t bear the idea that Chuck has been writing his life takes precedence over Jack’s life, Amara’s life, and, for that matter, Sam and Castiel’s autonomy. We share Sam’s outrage, but wonder at his silent apparent acquiescence. It’s time for a bigger brotherly confrontation than the one we get in this episode, though it may yet be brewing.