A relatively light “bottle” episode in the home stretch 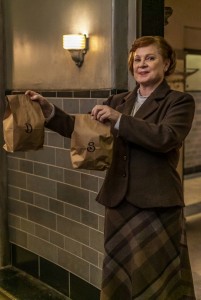 “Last Holiday” is Episode 14 in SUPERNATURAL’s fifteenth and final season. As such, we might expect something a little weightier, or at least a little bit more on the “what do we do about God/Chuck” track. Instead, “Last Holiday” is a relatively light bottle episode that only leaves the bunker for one quick fight and a few montage shots of the boys kicking in doors. It’s agreeable, and edges forward the slow-burning Dean (Jensen Ackles)/Jack (Alexander Calvert) détente, but it’s not a big plot-changer.

Sam (Jared Padalecki) doing research in bunker. Dean is trying to cook burgers, but is having problems with the pilot light and the hot water. Jack still hasn’t come out of his room since regaining his soul.

Dean says Billie, aka Death, said if they kill Chuck, aka God, they’ve got to kill Amara, God’s sister/the Darkness as well. But did Billie really say that, or is that just Dean’s interpretation? Tune in next week, as that’s not explored further here.

The air conditioning goes out. Dean decides he and Sam need to do their own repairs, as they can’t just call a plumber to their secret hideout.

There’s a control panel in the basement with a “reset” button and a “standby” button. Dean hits the reset button, although Sam thinks this is a bad idea. The lights go out, come back on again, Dean thinks he’s won a victory. We have no notion yet of what’s happened, but we’re instinctively with Sam on this. Sure enough, when Dean finally has his burger cooked, there’s a strange motherly woman Meagan Fay) in the kitchen.

The woman introduces herself as Mrs. Butters. She’s a wood nymph, who has cooked and cleaned for the Men of Letters since “before the war” – she thinks it’s 1959. She is devastated to hear that it’s 2020, and that the demon Abaddon killed all of the Men of Letters from Mrs. Butters’s time, as she considered them her family.

Mrs. Butters explains that when the Men went off for the ceremony and didn’t return, she placed the bunker and herself in standby mode. The reset woke her up. The Men of Letters were using her nymph magic to power things up. Surprise: the bunker has a monster radar. It’s currently detecting a nest of vampires.

Dean is all for going after the vamps and letting Mrs. Butters cook supper (and maybe do laundry). Sam is suspicious – how do they know they can trust her? Legitimate question.

Sam asks another good question while he’s at it: what about Jack? Dean knocks on Jack’s door, lets him know they have a guest who’s probably safe, but to watch himself just in case.

En route to the vamp nest, Sam and Dean talk in the car. Sam worries whether, even if Mrs. Butters is as innocuous as she claims to be, they should keep her around. He also thinks Jack is hiding something. Dean says he thinks Jack is fine.

Sam and Dean take out the two vamps with no trouble. When they return, Mrs. Butters has decorated for Christmas. Dean is happy about this. Sam is less sure. Mrs. Butters counsels, “Enjoy the world you’re fighting for, dear!” Whatever she is, this is good advice.

Jack finally comes out of his room. Mrs. Butters sense he is “other,” and asks what he is. Before he can answer, Dean enters, wearing a lavender night shirt with matching cap. Yeah, this is the final season, because Dean is never living down this outfit.

The monster radar goes off. Sam and Dean (changing into normal clothing) head out to deal with a lamia. Mrs. Butters has waxed the car and put blessed knives in the trunk. While they’re out, she tries to get to know Jack. When he explains about accidentally killing Mary, Mrs. Butters says that life gives us second chances. Jack takes this at face value, but we’re wondering what the Chuck is going on here.

We get a montage of the boys kicking in doors, and then joining Jack and Mrs. Butters in the bunker for a variety of holiday feast, concluding with Sam’s birthday. 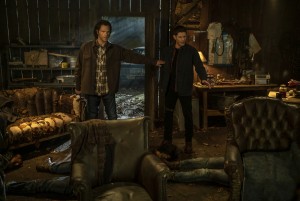 Jack discovers Mrs. Butters snooping in a drawer. He sends her off to make him a smoothie, then finds a film reel that relates to her. He plays it.

In the reel, Cuthbert Sinclair (Kavan Smith) addresses the viewer. Cuthbert was a former Man of Letters who was ejected from the group and finally killed by Dean back in Season 9. The reel apparently was shot during WWII. Cuthbert explains that Subject B, i.e., Mrs. Butters, killed two hundred men. Wood nymphs are normally docile, but deadly when they feel home or family are threatened. Cuthbert talks about of making Mrs. Butters feel like a member of the Men of Letters family, then has her decapitate a Nazi with her bare hands. Jack is alarmed and wants to talk with Sam.

Sam is dressed up (in a slightly old-fashioned style) for a date with Eileen, who’s in town (though we don’t see her). Sam leaves without Jack getting the chance to reveal what he’s learned. Jack isn’t comfortable confiding in Dean, so he follows Mrs. Butters.

When Jack confronts Mrs. Butters, she asks him how he felt watching her kill the Nazi. She thinks he enjoyed it. Jack realizes that Mrs. Buttters meant for him to find the film reel. He asks if this is some sort of test.

Mrs. Butters is convinced that Sam and Dean keep Jack locked up on the premises out of fear that he may hurt someone else the way he hurt Mary. Mrs. Butters says that, now that she’s here, the boys won’t have to worry about that, and magically hurls Jack into a wall, then slaps handcuffs on him.

Gee, Mrs. Butters, if Jack’s all that powerful and all that bloodthirsty, are you sure you want to do that? She is, actually. When Jack tries to whammy her back, it turns out that the smoothies she’s been giving him were dampening his power. She says she’s protecting her family.

Mrs. Butters locks Jack up downstairs. Then she very nicely tells Dean they’ve got to kill Jack. She thrusts an angel blade into Dean’s hands and says that he and Sam don’t need to be afraid anymore. Dean is very disappointed that Mrs. Butters is apparently nuts. He proposes that they let Jack go. Mrs. Butters responds by locking Dean in the room with Jack (and the angel blade), saying that Jack has obviously infected Dean.

Sam returns, late, from his date. Mrs. Butters has waited up for him. Mrs. Butters tells Sam that Jack has taken over Dean’s mind. She wants Sam to help her kill both Jack and Dean. Sam pretends to go along with it, then phones Dean from his room. On the cell phone with Dean, Sam asks why Dean didn’t call for rescue. Dean says he didn’t want to interrupt Sam’s romance. Sam is astonished by Dean’s priorities.

It turns out that neither Sam nor Dean knows what might kill Mrs. Butters. They were going to look into it, and then came Christmas and Thanksgiving and other meals. Dean suggests hitting the “standby” button to put Mrs. Butters back into suspended animation.

Locked in the room, Jack asks if Dean still thinks he’s a monster. Dean replies that he’s trying, but what Jack did isn’t easy to forgive. Still, Dean is not going to let “some evil Mary Poppins” kill Jack.

Mrs. Butters is onto Sam. She zaps the gun out of his hands, and then zaps him into a chair. She wants to explain things the way Mr. Cuthbert explained them to her. She tries to torture Sam into agreeing that Jack is a monster, and begins pulling out his fingernails.

Dean tries to cut through Jack’s handcuffs with the angel blade. This produces a flare that knocks Jack across the room, cracking the wall, without damaging the cuffs. Oops. Seeing the damage to the wall, Dean comes up with a new plan. He puts Jack against the door, then uses the knife on the cuffs again. This ensuing flare knocks Jack into the door, which comes off its hinges. Voila, freedom!

Dean and Jack go to the control room, Dean hits the reset button with a hammer. The lights go out, but Mrs. Butters seems to be gone. Dean sets about untying Sam (who is now missing several fingernails) from the chair.

But Mrs. Butters returns, and whammies all three of the guys across the room. Feeling she failed the last batch of Men of Letters, she refuses to fail again. Sam once more attempts to reason with Mrs. Butters, saying that she can’t protect him, and maybe Dean, by killing the people they love. When Mrs. Butters says that Cuthbert told her she couldn’t go back to her forest because protecting the bunker was more important, Sam says that Cuthbert lied to her.

Dean adds that the mission is saving the world, and Jack can do exactly that. The lights come back on as Mrs. Butters weeps. She misses her own nymph family. Mrs. Butters uses her magic to fix Sam’s hand. She apologizes for everything. Sam, Dean, and Jack all agree that Mrs. Butters should go back to her forest. Without her magic, the bunker will revert to standby mode – no more monster radar. Jack gives Mrs. Butters a photo of “her” Men of Letters that has been on the wall for decades.

Mrs. Butters urges Dean to eat his vegetables, Sam to get a haircut, and Jack to save the world. Then she zaps herself back home to her forest. The bunker goes back to its usual state.

Jack confides in Sam that he’s worried. Jack is supposed to kill God, but Mrs. Butters – powerful, but hardly a god – was able to leech his powers away, because Jack wasn’t paying attention. Sam says that Jack is the only one who can save the world. And then Dean enters with a birthday cake he has made for Jack. It’s a little flat and lopsided, but Jack is moved by the gesture.

It’s sweet that Jack, with a soul, has a trusting nature again (he was gulping down those smoothies without question). It’s also nice that, we hope, the Jack/Dean tension is coming to an end. It’s a little weird that Dean’s refusal to shoot even a soulless Jack in the Season 14 finale wasn’t recognized by anybody (Dean! Jack! Castiel!) of Dean’s true feelings, but whatever. It’s also a relief that, at this point in the proceedings, SUPERNATURAL doesn’t feel the need to turn every last problem into a tragedy and lets Mrs. Butters see the light and go home.

We do wonder how Sam and Dean have managed to spend this long in the bunker (to say nothing of their numerous guests) with no one ever checking out the control panel before now. But, as “Last Holiday” points out, they’ve been busy.