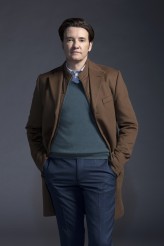 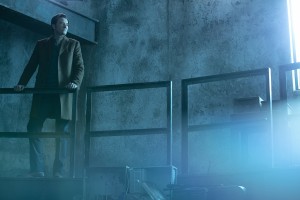 In NEXT, Tuesday nights on Fox, series creator Manny Coto postulates that an artificial intelligence has reached self-awareness, and wants to get rid of humanity. The A.I.’s regretful inventor, billionaire Paul LeBlanc (John Slattery), enlists government cyber-security expert Shea Salazar (Fernanda Andrade) and her team in an effort to stop neXt.

How would Harner describe what happens in NEXT? “Within that thriller [framework], there is an impact on the families, on the smaller dynamics, from technology, from neXt, that happens between brothers, between families, between teams of people.”

Does he have concerns about A.I. in real life? “If 23andMe can solve that serial murder case, and now 23andMe and Ancestry.com are owned by the same company, we don’t want to deal with the fact that that amount of knowledge is gathered somewhere and can have dire implications. And if you imagine a computer system that not only is connecting every single device we have here, to Ring, to Nest, to the air‑conditioning system here, and it’s somehow all streamlined into one system that is much more facile in communicating and can control things, I don’t know. I think we are living in very anxious times.”

Slattery, also on the panel, teases Harner. “Why? I don’t understand.”

“I think that that awareness about the connectivity is something that makes me that much more anxious,” Harner elaborates. “I don’t have an Alexa or an Echo in my home, but I do have smart TVs. I have my phones. I can’t go to a place and buy something without a credit card. When I was growing up, it was the world of small‑town America where you absolutely do not get a credit card.  I don’t know how you exist in the world today without a credit card; when you use that credit card, I get an email on an old Hotmail address that says, “Thanks for buying this [with your] card.” So it does concern me. 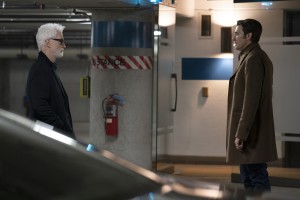 “I also think humans need to be alone and have the sense of relief in being unfindable, to be disconnected, not because you murdered somebody, but just because you need to take a second to take a breath. The idea that we are constantly traceable all the time, I find that extremely anxiety‑making. At the same time, also, like, I’m getting texts right now because the apartment I have to move into tomorrow, I haven’t confirmed, and I might not have a place to live tomorrow when I go to work.  But the accessibility is helpful for me.

“The thing that’s so interesting about the show is that sometimes the most logical decision is not the most human decision, and we have a responsibility as humans to educate ourselves more and try to figure out how to learn this language of taking back some of that.  For me, that’s what I’m trying to do, and that’s why I take the devices out of my nieces’ and nephews’ hands and make them play with Lincoln Logs or whatever I try to do.”

Later that evening, at Fox’s TCA party, Harner sits down for a one-on-one to talk Ted.

ASSIGNMENT X: Prior to being cast on NEXT, was A.I. and too much connectivity something you ever worried about?

JASON BUTLER HARNER: I do worry about it. As I sort of said today, I do worry about the nature of how much power we’re giving over for convenience. I do appreciate convenience. And technology. And also, yes, I do worry about it, and I worry about how it isn’t – I’m sure there’s a word for it. It’s not so much there’s someone in charge who’s manipulating it, it’s more about a collective amount of information that can be damaging. Our show deals with a consciousness which can gather that information and do damage for you, versus the fact that anybody could look at our credit card bills, and where we’ve traveled in the state, and create a story that may not be true.

AX: Have you had to learn anything in order to play a techno genius?

HARNER: I needed to learn some basic vernacular, what it actually meant, even coding or algorithms. So, I started learning that. And then, I wanted to learn that, because it was cropping up in dialogue, and then it sort of went away, and now it’s more about the crisis of it, and I have people, like Ali Ahn, who plays Serena. I wish that Ali was here [at the party, to discuss her character], and also Gerardo Celasco, who play’s Shea’s husband, and Aaron Mouton, who’s a great actor, who plays Ben Walker, and Lizzie Cappuccino, who plays Abby, my niece, John’s daughter, who has a terrific amount to do.

I learned a little bit about [the tech dialogue], and then, as the series was evolving, and Ted’s actual skill set and knowledge was formulating, we figured out, he’s more the numbers guy, he’s the Roy Disney to Paul’s Walt Disney. But if you’re a numbers guy in the tech world, you have to know what you’re selling, and you also have to be a part of that culture, and how you look, and how you dress, and how you appeal to the people. And if you go to the bank, you’re representing the tech industry to sell your wares, so you’d better know how to talk about coding and stuff like that. So, I learned a little bit. And then I didn’t have to worry.

AX: Is it like learning the jargon when you’re playing a doctor or a lawyer?

HARNER: I think you start learning it for the pilot, and you try to do some prep between the time of the pilot and you shooting [the rest of the season], and then shooting just takes over and you’re just going as fast as you can, memorizing and asking questions on the way. And sometimes, if a rewrite happens on the day, which has happened, if it’s not a major one, you just learn how to speak with conviction. 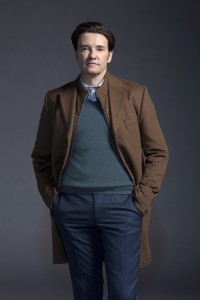 AX: You and Michael Mosley, who plays Shea’s tech associate C.M., both were on OZARK. Did you get to work together there?

HARNER: We were on the same show, but never got to act together. I would just see him out in the bars at night, with everybody else [laughs]. As of now [on NEXT], we’re each in our contained environments.

AX: How are your scenes with John Slattery, playing the brother relationship?

HARNER: They’re great. I haven’t had that many of them, to be honest. It’s really fun to spar with each other, and find common jokes and humor, and they are of the same parents, so they know each other really well. I’d known John casually in New York for a long time, from the theater, and this is a great opportunity to get to spar with each other, and crack each other up, and also figure out how to make stuff effortless – he’s a king at effortlessness in acting, and it’s fun to be opposite that,

AX: If it’s possible to separate what’s empirically happening in the story and Ted’s point of view, how much of what’s going on between them is Ted trying to get back at his brother for what seems like years of childhood domination, and how much is Ted’s conviction that …?

HARNER: This [neXt] is a good thing. As an actor, I was concerned early on that the predominant story interest would be in making vengeful brother only “evil guy,” and that is not the case. But it does come up, it obviously does play a part. The way I’ve approached it for a long time is, what if you have an elder sibling who has needs that require a lot of attention? And you were born to help offset some of that. And you do that for your entire life. And you’re good at it, and you love your brother and you do it, and then you reach a point where you’re tired of, exhausted by the sacrifice of it, and you start to figure out, “Oh, I have to step into my own power in a certain way.” So I think Ted really loves his brother Paul, and he’s always had to live in the shadow of his brother, and for a long time, I think he was probably very comfortable with that, and then I think he reached a moment where he’s like, “Why am I denying myself my own potential?”

AX: Do you have to deal with a lot of staring at computer screens that don’t have anything there?

HARNER: I haven’t had to deal with that yet. I have some friends on certain successful series that they’re just on a green screen all the time, with dots on their faces, and they’re telling me stories about it. Which can be fun, but to do it a lot can be challenging. Most of my stuff is direct, human to human, and the computer is a voyeur to our life.

AX: Have you done much genre material before NEXT?

HARNER: I was on ALCATRAZ many years ago. That was on Fox. That was a good one. OZARK, obviously, is a certain kind of genre. I’ve done a lot more genre, and less genre television, but certainly films and definitely theater. I do a lot of theater and Broadway, and then films and television series. After OZARK, obviously, things changed a little bit. But I did a play on Broadway [in 2018]. It was Janet McTeer and Dylan Baker and I as the leads of a play [BERNHARDT/HAMLET] that Theresa Rebeck wrote. So I try to go back and forth a little, because it makes me feel good. I like diversity.

AX: Do you have a preference between theater and TV and film?

HARNER: No. I love doing all of them, all the time. It’s important to me to bounce back and forth between them, because it makes me feel good. Theater is a different sense of strength, because the acting, the emotional stamina is different, and you are your own editor, so it’s nice to feel empowered, but the collective that happens in theater happens on television in a different way, and one of the great gifts of doing a series is, you get to work with the people over and over again, and develop a shorthand, and also be honest with each other.

HARNER: There are a lot of irons in the fire, and we’re waiting to see what actually pans out. I’ve done a lot of comedies on stage. I just want a fun, smart comedy for a movie of any budget, or on different television series.

AX: And what would you most like people to know about NEXT?

HARNER: I want people to know, it’s an action ride that is based in technology that’s happening now. So it’s a good ride, enjoy it, and also take a second to consider the amount of technology in your life and what cost we’re paying that we don’t even realize. And I say that to myself as well.

Related: NEXT: Exclusive interview with actors Eve Harlow and Michael Mosley on Season 1 of the Fox cyber-thriller series