High stakes and a lot of emotion 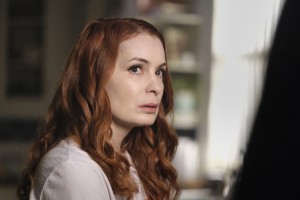 SUPERNATURAL is heading towards its conclusion, with enormous stakes and even bigger emotion. In “Despair,” there’s a lot of the title sentiment, but there’s also true happiness and love.

Jack (Alexander Calvert) is having a lot of physical problems, as he’s turned himself into a living bomb. He was meant to die taking out Chuck/God and Chuck’s sister Amara. However, Chuck absorbed Amara and revealed he’d been playing everybody all along.

Now Jack is afraid he’ll explode in the bunker and kill Sam (Jared Padalecki), Dean (Jensen Ackles), and Castiel (Misha Collins) if they don’t let him do it outside. Dean, now fully on board with saving Jack, yells at Sam to look up some kind of magic that will help.

Before that can happen, Billie/Death (Lisa Berry) appears, and is furious that the guys messed up her plan. She says it’s not because Chuck/God knew what all of them were doing at every step, but because of the guys. Way to take responsibility for your own mistakes, Billie. Billie sends Jack to the Empty, where he blows up. 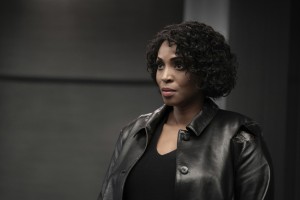 Hold on, where did Chuck go? Given what happens throughout the rest of the episode, we’ll assume Billie means “gone” as in no longer in targeting range, rather than somehow off this Earthly plane.

Billie explains that Jack was designed to take out some enormous metaphysical thing. Without Chuck around, the Empty was the only place Billie could send Jack. Since the Empty isn’t as powerful as Chuck/God, Jack may or may not have survived his own detonation. But if Jack survives, and the Empty (Rachel Miner) survives, the Empty is going to be irate at Billie’s betrayal. Billie had promised the Empty that she/it could go back to sleep, but that won’t happen now either.

Billie wants Sam to give back God’s death book, which Sam took from Death’s library in the previous episode. Sam says that Billie’s agenda was to kill all of them. Billie acknowledges this, but says if they want Jack back, Sam had better turn over the book now.

In the Empty, the Empty survives Jack’s detonation. As Billie predicted, the Empty is angry. Fortunately, the Empty can’t come to Earth unless invited, which means Billie is safe here. Billie reads the new ending to God’s death book, which she pronounces “interesting.”

Billie, however, declares that Jack is still useful, so she’s going to take him with her. How quickly they forget – Sam and Dean managed to kill the previous Death, after all. Dean wounds Billie with her own scythe, and she vanishes, leaving Jack (and the scythe) behind.

Later, Dean apologizes to Sam for having pulled a gun on him. He just couldn’t snap out of it. Sam says that Dean has snapped him out of worse. Dean feels hopeless. Jack is now powerless, archangel Michael isn’t returning their prayers, Billie wants to kill them, and now that Chuck has absorbed Amara, He’s probably more powerful than ever. It’s a good brotherly moment. Sam suggests they regroup.

Back at the Death library, one of Billie’s Reapers announces that he’s put up the warding to keep the Empty out. Billie says the plan has changed.

Alt-world Charlie (Felicia Day) is having breakfast with Stevie, her new Hunter girlfriend. Felicia is enjoying the meal when Stevie abruptly vanishes. Charlie, distraught and baffled, calls Sam and Dean. 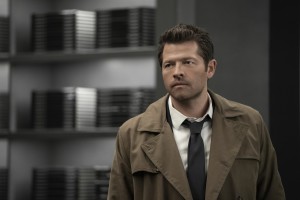 Castiel and Jack are waiting outside while the boys confer with Charlie. Jack feels strange, but he says this may just be because the plan, his destiny, is over. He was ready to die to save the world, he wanted to, and now he doesn’t know his purpose.

Castiel tells Jack that he never needed absolution from anybody. They care about Jack because he’s himself, not because of his powers. Jack still feels useless because he has no powers and can’t protect his friends. Both he and Castiel are scared, but they can admit this and don’t let their fear paralyze them.

Sam and Dean explain to Charlie that they’ve angered Death, who is sending back people from other worlds that don’t exist anymore. Charlie of course is from Apocalypse World, so she could vanish at any second, as could anyone who was ever resurrected.

Sam, Dean, Castiel and Jack head to pick up Sam’s resurrected girlfriend Eileen. Sam is texting with her when she drops out of the conversation. The guys find Eileen’s phone, but not Eileen.

Sam is stricken, but stoic. He declares they have to get everybody who might be on Billie’s kill list to some central, safe place and ward it.

Dean agrees with Sam. However, Dean declares that he’s going to try to kill Billie with her own scythe. Dean’s the one who fell for Billie’s plan in the first place, now he’s going to end it. Dean and Sam hug, and then Dean and Castiel take off in the Impala.

Donna Hanscum (Briana Buckmaster) has found an abandoned grain silo where all the refugees can hide from Death.

Sam has Jack drive while he does research in the car. They get to Donna. Jack goes to set up warding inside while Sam talks to Donna. She’s also called a bunch of other Hunters, including Garth and Jody, even though they’re not on Death’s list and shouldn’t have to hide.

Charlie shows up. She’s grieving the loss of Stevie, unaware of Sam’s loss of Eileen. Bobby (Jim Beaver) greets Sam. Bobby points out that the refugees see Sam as the boss man – they’re all waiting for Mr. Winchester to tell them what to do. Sam has had this leadership role before, but seems a little abashed by it now.

The silo seems good, except for its lack of toilet facilities. Sam has found one of Rowena’s spells that he’s going to use to try to back up the warding, although he doesn’t sound very hopeful about it.

Dean, armed with Death’s scythe, and Castiel, armed with an angel blade, enter Death’s library. Billie greets them, unimpressed. They fight, Billie gets the drop on Castiel, Dean gets the drop on Billie, and she finally says that she’s not the one killing their friends. It’s most likely Chuck.

Although the wards painted on the silo walls light up, people start disappearing out of the shelter – including Donna, who’s not on Death’s list. Finally, only Sam and Jack are left.

In the library, Billie reveals that when Dean cut her earlier, the wound was fatal. She’s dying. All she cares about now is killing Dean. She zaps Dean and Castiel across the room.

Dean and Castiel get back to the bunker, but Billie follows them. She is infuriated by Dean breaking the rules, defying death (and Death). Castiel drags Dean into a file room and uses his own angelic blood to paint a sigil on the door.

As Billie tries to break down the door, Castiel reminds Dean that Billie is dying. Maybe they can wait her out. Dean doesn’t think so. His bravado is gone. He feels awful that he’s led Castiel into another trap. They’re here because Dean felt he had to kill Chuck – which was all Chuck manipulating Dean into acting crazy. Now Dean and Castiel are both going to die, and they’re not where they should be, with Sam and Jack at the end.

Castiel realizes there’s something that scares Billie, which is the Empty. Castiel finally tells Dean about his deal with the Empty – Castiel had traded his life for Jack’s, but the Empty won’t take Cass until he experiences a moment of true happiness. That moment will summon the Empty and allow her/it to come to Earth (and get Billie). Dean wonders why Cass is telling him this now. Castiel says he’s always wondered what his own true happiness could even be.

We’ve frankly been wondering this, too. Given everything that’s been going on ever since Castiel made the deal, it seems like if he can rise to controllable depression, that would be an achievement.

Castiel says that the one thing he wants he knows he can’t have. But he’s realized that happiness isn’t in having, it’s in just being, it’s in being able to say it.

Dean, speaking for us all, asks, “What are you talking about, man?”

Castiel says happiness is in just saying it. He says that he knows how Dean sees himself, which is the same way “our enemies see you,” as destructive, angry, filled with hate, as “Daddy’s blunt instrument.” But, Castiel goes on, that’s not who Dean is, and that’s not how the people around him see him. Everything he’s done, he’s done for love – raising and saving Sam, fighting for the whole world. “You are the most caring man on Earth, you are the most selfless, loving human being I will ever know.” Knowing Dean has changed Castiel – because Dean cared, Castiel cared.

And Dean for once is able to see himself as Castiel sees him. Both men have tears in their eyes by now.

The awesomeness of this speech is hard to overstate. Kudos to writer Robert Berens for packing it with earned sentiment and even some humor. And then …

Dean is afraid this sounds like a goodbye, and it is. Castiel says, “I love you.”

Well, hallelujah, SUPERNATURAL went there. It provides an out for those who don’t want to take it that way – sure, maybe this is just an angel experiencing true human brotherly feeling. Except that, since Dean has called Castiel a brother several times now, it seems like fraternal feeling ought to be easier for Cass to express than this.

Nope, after twelve seasons of teasing it in every way possible, both seriously and comedically, in deeds and silences and observations from other characters, the show brings the subtext into full text. It’s boldly going where few genre shows have gone before, allowing an established main male character to come out when that hasn’t been his main storyline, even it it’s an exit line. Since actor Collins has confirmed that this is intended as a statement of Castiel’s romantic love for Dean, that settles it. And the concept that simply being able to declare his feelings, to be honest about himself, makes Castiel truly happy is touching and marvelous. Moreover, Dean isn’t upset about it, only about the prospect of losing Castiel.

SUPERNATURAL has the courage to look at itself, and acknowledge where it is and what it’s doing, and that’s one of the things that’s most wonderful about it.

As Billie breaks down the door, Castiel says, “Goodbye, Dean.” Dean says, “Don’t do this.” But Castiel puts his hands on Dean’s shoulders, and knocks him out of the way. The Empty flows into the room, taking both Billie and Castiel, who is smiling.

Sam and Jack exit the grain silo. Sam keeps getting Dean’s voicemail. There doesn’t seem to be anyone around. Jack wonders if it was just the people in the silo who have disappeared. Then Jack and Sam see an empty playground with the equipment still spinning. They’re afraid they’re the only people left on Earth.

Dean is sitting on the floor of the warded room in the bunker. He sees Sam is trying to call him, but Dean can’t bear to answer.

So “Despair” ends with both a gut punch – we’ve lost Castiel, and almost everybody else – and a big question. What can possibly happen when Sam, Dean, and Jack confront Chuck?

The episode flies by with equal measures of dread, self-comprehension, and, yeah, a lot of love that feels absolutely sincere. It also features complex, nuanced performances, especially from Ackles and Collins. Can’t ask for much more than that.