bones review the cold in the case 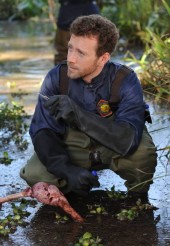 Interesting forensics, good dilemma for our leads and a strong guest cast 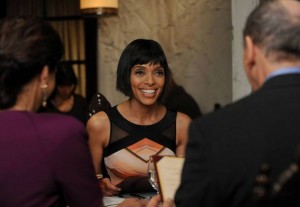 There’s a lot going on in the BONES episode “The Cold in the Case,” starting with the twist that provides the title. When the remains of a young woman are found and entomologist Hodgins (TJ Thyne) sees insect activity that indicate three widely different (by weeks and months) times of death, the whole team is baffled. Before they can figure out who killed the victim, or even how she was killed, there’s a question as to when. While this is going on,Cam (Tamara Taylor) and Arastoo (Pej Vahdat) are both stressing over the prospect of going out to supper with his traditional-minded Iranian parents (Shohreh Agdashloo and Braeden Marcott) and Booth (David Boreanaz) is surprisingly uncomfortable at the prospect of promotion. This is all very good stuff, marred only by one strangely thoughtless goof at the end.

It turns out that the victim, Madeline Papadelis (Kristin Burke), was mourning the death of her young daughter, whom she’d had cryogenically frozen, in the hope that the little girl could be revived at some time in the future. Madeline was a big believer in cryogenics and helped out at the lab where her daughter’s body was kept. Although Madeline’s ex-husband (Myk Watford) at first looks good as the culprit – Madeline had a restraining order out on him and he was so angry about the freezing of their daughter that he tried to steal the body for burial – he’s not guilty. As he points out, since he couldn’t figure out how to open a cryogenic unit to remove his child’s corpse, he could hardly properly store Madeline inside one.

It turns out that the husband and wife who own the cryogenic center both are to blame. The husband was in love with Madeline, but it wasn’t reciprocal. He chloroformed her, then froze her. His wife, who believed there was an affair, disconnected Madeline from cryo and threw her remains into the swamp, where the body thawed slowly (hence the apparent different times of death).

Booth at first resists acknowledging that he’s being groomed for a promotion until the evidence becomes overwhelming. It looks like it will be an overseas post in Germany. Booth says of course he won’t take it because it would take him away from Brennan (Emily Deschanel) and their daughter Christine, but Brennan says she’s proud of Booth, she can easily work in Germany and the experience will be great. She’s sure he’d do it for her. Booth finally tells Brennan that the job site is an anti-terrorism base that is likely unsafe for families and that the questions he’s being asked indicate the FBI may want him to become a sniper again. Booth never wants to return to being a sniper; Brennan is entirely sympathetic

Arastoo is so worried about his parents saying something awful to Cam that he blows up during supper over nothing and drags Cam away before the food is even ordered. Later, the parents come by Cam’s apartment. Arastoo’s mother says that Arastoo was a headstrong boy, but he has grown into a fine and accomplished man – why did he think his parents didn’t notice that he is now an adult and has changed? Both Cam and Arastoo are very emotionally affected by this. Everything is going very well. Then Arastoo’s mom asks a question about marriage; surely when a man introduces a woman to his parents, that’s where this is headed? Arastoo says he assumed Cam guessed this. Arastoo and his parents have tea; Cam announces she’s going to have a Scotch.

And this is where it looks like the episode has gone off-track just a bit. After all of the out-loud concern over the sensibilities of Arastoo’s Iranian Muslim parents,Cam is going to drink alcohol in front of them the first time they all really sit down together? Are we meant to think that Arastoo’s folks are in fact not nearly as traditional as advertised, that Cam is being insensitive, or that for the sake of a joke, the creative staff suddenly forgot the underpinnings of the scene? It’s impossible to tell, but pondering the matter draws us away from the episode.

Otherwise, “The Cold in the Case” is solid. The Brennan/Booth sequences have the right amount of emotion and back and forth, and recurring actor Vahdat and guests Agdashloo and Marcott are all excellent. The twists and turns of the investigation are all as intriguing to the viewers as they are to the laboratory professionals, and it’s worthy of their talents and our time.