The actor talks starring in the half-hour comedy 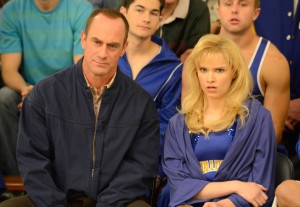 Christopher Meloni is so associated with his long-running TV drama roles, especially NYPD detective Elliot Stabler on twelve years of LAW & ORDER: SVU and prison inmate Chris Keller on HBO’s OZ, plus last year’s turns as heroic Col. Nathan Hardy in MAN OF STEEL and principled Leo Durocher in 42, people tend to forget he has a lighter side. Meloni voiced Spike in DINOSAURS, appeared as different characters in the first two HAROLD & KUMAR films, had a wryly amusing guest turn on Season 5 of TRUE BLOOD and can currently be seen on the big screen as a used car salesman in the dramedy SMALL TIME.

Meloni is also the star of Fox’s new half-hour comedy SURVIVING JACK, Thursdays at 9:30 PM. Created by Justin Halpern and Bill Lawrence and set in the 1990s, SURVIVING JACK sees Meloni as successful surgeon Jack Dunlevy, who decides that it will be a breeze taking care of the two teenaged kids (Connor Buckley and Claudia Lee) while his wife Joanne (Rachael Harris) returns to college. Actually, it is pretty easy for Jack, a man’s man who believes in toughening up the youngsters; the teens, however, find Dad simply tough.

Meloni, who will also be seen in the upcoming feature SIN CITY: A DAME TO KILL FOR, is at a party thrown by Fox for the Television Critics Association. He takes some time to talk about surviving and even thriving in JACK.

ASSIGNMENT X: Did you have any particular experience in comedy that made you want to do a comedy series?

CHRISTOPHER MELONI: No, just comedy in general is such a liberating experience, it’s just nice to swim in those waters.

AX: In coming back to television, did you say to yourself, “I don’t want to play one more person in grim, depressing circumstances,” or were you looking to do television at all when this was offered to you?

MELONI: Nothing real specific except for this – no grim circumstances for twenty-two one-hour episodes. I just couldn’t do that schedule again. So I could be grim for thirteen episodes. And then this pilot plopped on my desk, and I said, “This is the funniest thing I’ve read all year.” I had worked with Bill [on SCRUBS], I knew Bill socially and professionally. So I agreed with A) how he ran things, his comedic sensibilities. He obviously knows what the hell he’s doing. So that was a huge chunk. I immediately understood the humor, and I knew how he would nurture it along.

AX: Do you have a favorite scene that you can talk about that you’ve done so far?

MELONI: There are a lot of them. When my son is in the back seat of the car, tongue-tied, awkwardly unable to speak with this new girlfriend, and I jump into the car. I give him a bunch of stuff to talk about.

AX: What are your memories of the Nineties? Is this a period you’re enjoying revisiting?

MELONI: Well, it was in an absolutely different context. I was a young, single, struggling actor, so it was a completely different vibe.

AX: To play Jack, are you drawing on your real life with your kids at all, or are you very different from this man and this situation?

MELONI: No, he’s a bit different, they’re pretty different, but there’s some overlap. There are certain moments that I’m very no-nonsense, but on the whole, I think I’m a rather playful parent.

AX: You’re not going to hose the kids for not catching a baseball right …

MELONI: No. I’d hose them for other stuff, but not that.