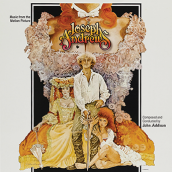 Director Tony Richardson ushered in a new era for bawdy costume comedies with his 1963 Best Picture winner TOM JONES, which also nabbed its composer John Addison a Best Score Oscar for his “substantially original” music. A rollicking pastiche of 17th century stylings that treated pompous classical music clichés with all the delightful disrespect of Mozart on a drunken night out, TOM JONES re-invigorated the costume drama soundtrack with bawdy delight. Having released Addison’s clowning masterwork several years back to a sold-out reception, Kritzerland has now put out the director-composer’s 1977 follow-up with their adaptation of “Tom” author Henry Fielding’s JOSEPH ANDREWS.

Though he might be a distant cousin in popularity to JONES  (though just given a DVD re-issue on Warner Archive), there’s much fun to be had in the attempted debauchery of Fielding’s more piously devoted character. If anything, the composer takes his classical burlesque to even more cartoonish extremes. Dexterously wielding his theme to comic and romantic effect, Addison uses wily tubas, genteel cimbaloms, graceful harps and woozy French horns and a romping orchestra as one misfortune after the next befalls good Joseph. The effect is like hearing a score with one foot in the Baroque era and the other in a Klezmer-inflected slapstick bedroom farce that just happens to be taking in the 1920s, a delightfully inventive, jazzy approach that makes JOSEPH a constant gonzo delight. Yet amidst the zaniness, Addison is able to turn his thematic silliness into one of true, gentle beauty that’s full of the English countryside’s bucolic splendor. It’s a score certainly worthy of discovery as Addison unfurls more madcap elegance from TOM JONES as opposed to riding that score’s coattails.

Click on the link to Purchase the JOSEPH ANDREWS soundtrack