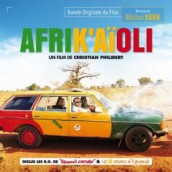 Michel Korb conjures the most delightful ethnic scoring outside of RIO

Outside of John Powell’s RIO scores, you’re not likely to hear a more delightful jungle of tropical instruments than the ethnic winds and percussion spread out through these three scores on Music Box’s assemblage of the music of Michel Korb – perhaps France’s most interesting proponent of ethnomusicology outside of Maurice Jarre. But where that composer used African and Asian rhythms to dramatic effect, Korb’s work is comedic in nature, if not outrightly joyous. With AFRIKA’AIOLI dealing with two layabouts who become fish out of water on the dark continent, Korb’s whistling, drum beats, antique-sounding piano and squeeze box percussion conveys a thematic, bumbling sense of energy, not to mention a Euro-African mélange of sounds that capture the enchantment of the land, and good-hearted nature of its native character, while creating a broken-down, soft-shuffle beat that seems a perfect dance for an inept clown, or mime.

AFRIKA’AIOLI ‘s prequel TRAVL D’ARABE gets rhythms that are more understandably Middle Eastern, once again showing Korb’s affinity for a strong theme that’s alive with cross-culture eccentricity, especially with such unexpected additions as a harmonica, voice and a hip-hop groove. Equally delightful on this soundtrack triple feature are the calliope circus rhythms that inflect LES 4 SAISONS D’ESPIGOULE, which uses wistful tubas along with the musical approximations of animal cries and grasshopper chirps for its pokey enchantment. But then again, if there’s an adjective that French composers seem to specialize with in the land of AMELIE, then its “whimsy,” of which Michel Korb excels at in this ethnically jazzy three-ring circus of musical delight.

Click on the link to Purchase the AFRIKA’AIOLI soundtrack