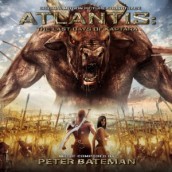 The animation might be bull, but Peter Bateman's score sure isn't

If its YouTube trailer is anything to judge by, the animation for this update on the Minotaur fable is more cow than bull. But when listening to its pretty stupendous score by Peter Bateman, you’d think that Dreamworks animation was taking a stab at 300. For if the CGI toon budget in fact went to Bateman’s score, then it’s money well spent for the unabashed, heroic splendor that resonates like an infinitely bigger production. No doubt the magic of working as an orchestrator on such lavish genre scores as PRIEST, AFTER EARTH and the upcoming MALEFICENT rubbed off in a big way for Bateman, who takes up musical sword with Christopher Young and James Newton Howard in knowing how to throw orchestral weight around, particularly when it comes to the big, adventurous brass balls that embody the mythic might of manly monster-slayers.

ATLANTIS towers with sound and fury, but has the melodic chops to back its ambitions up, complete with chorus, ethnic instruments and rocking percussion that show Bateman knows his way around the maze of new school Greek mythology. If anything, “Atlantis” stands as a beyond-mighty calling card for movies worth this composer’s symphonic mettle, as KAPTARA more than shows Bateman’s got the orchestral stuff of legend.

Click on the link to Purchase the ATLANTIS: THE LAST DAYS OF KAPTARA soundtrack