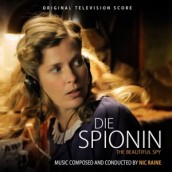 Nic Raine hears WW2 suspense at its most seductive

Besides his yeoman work conducting new versions of classic soundtracks (LAWRENCE OF ARABIA, THE ALAMO) and orchestrating (ALEXANDER, CURSE OF THE WERE-RABBIT), Nic Raine is a more-than-accomplished composer in his own right, a talent last heard on Tadlow’s release to SHORES OF HOPE. Now the English musician gives another German production a remarkable score with THE BEAUTIFUL SPY, where a looker for sale during the Nazi’s rise gets bounced between the Axis and Allies for her espionage favors. Raine’s music is a suspenseful valentine to John Barry, a composer whose suspenseful stylings he certainly knows his way around after de-coding the orchestration for ENIGMA.

As Barry did for that picture’s heroine who’s caught up in life-or-death WW2 dealings on Britain’s home front, Raine deploys silken strings amidst suspenseful piano percussion, its spy gorgeously embodied by two themes that never get tiring, one conveying her femininity, and the other the danger she’s thrown into by both sides, cleverly varying his motifs between a child’s lullaby-like voices and chilling strings. And having recently re-performed Goldsmith’s conspiratorial score for THE SALAMANDER, Raine brings on riveting, militaristic danger. But most unexpectedly, Raine draws even more on the silken eroticism of Goldsmith’s BASIC INSTINCT to convey his character’s more sensual talents. The result as is pulse-pounding as it is romantic, a symphonically thrilling score that shows just how well Raine decoded the maestro’s orchestral secrets into his own, thematically engaging voice.

Click on the link to Purchase the BEAUTIFUL SPY soundtrack