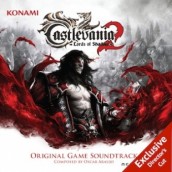 If you want proof that video game scores can scale epically dark heights, then Spanish composer Oscar Araujo’s latest sojourn into the nightmarishly heroic world of CASTLEVANIA is a thrilling, and resounding answer to the affirmative. Having scored an animated version of his country’s legendary knight El Cid, Araujo knows about the kind of religious fortitude necessary to wield a sword against the forces of darkness, a conviction that takes on hell-blazing power when given the armor of Dracula himself. Having musically done battle with the demonic opponents of LORDS OF SHADOW and its follow-up MIRROR OF FATE, Araujo unleashes his symphonic reckoning for the lord of the undead’s battle with Satan himself.

In fact, you might think that Araujo was playing Aragon himself storming into the gates of Mordor given just how nobly sweeping his score is. Perhaps it’s because as opposed to Dracula’s more horrific vein, the composer is tapping into the knightly, romantic spirit of this eternal character that’s made him equal parts swooning and sinister. Beyond bowling us over with its religious chorus and sweeping strings, it’s the more intimately thematic, romantic quality of a piano, or violin that makes this remarkably performed score (its orchestras seamlessly ranging from England to Spain and Bratislava) so impressive, and appealing for soundtrack fans way outside of CASTLEVANIA‘s button-mashing orbit. But this is a demon-slaying soundtrack first and foremost, and Araujo brings out of the pounding, brass-crashing evil when the devil arrives to do battle, carrying all of the fiery, furious musical weight that Howard Shore bestowed to Smaug himself. Like the best game scores, LORDS OF SHADOW 2 carries the impact of live action, especially when wielded by the crusading power of Dracula.

Click on the link to Purchase the CASTLEVANIA: LORDS OF SHADOW 2 soundtrack