Home » After the Dark Soundtrack Review 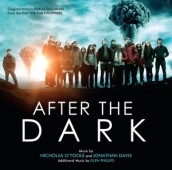 CD Review: AFTER THE DARK (THE PHILOSOPHERS) soundtrack

Alt. rockers hear the intriguing possibilities of The Apocalypse

A group of handsomely fresh-scrubbed western students gather in a Jakarta classroom to play mental doomsday games about which few of them will get to squeeze into an imaginary bunker. Heady stuff indeed for a surreal apocalypse film as it were, mind games that are given a creepily meditative, futuristic pulse by co-composers Nicholas O’Toole (HOW TO BE A SERIAL KILLER) and Jonathan Davis, here contributing his first score since 2002s QUEEN OF THE DAMNED (then done alongside Richard Gibbs). Better known among concertgoers for being front and center with the group Korn, Davis also gets additional music assistance from Toad the Wet Sprocket’s Glen Phillips for this cohesively mesmerizing score.

Fitting into a musical genre that might be labeled “alt. sci-fi” (whose members include TRON: LEGACY, ANOTHER EARTH and GRAVITY), AFTER THE DARK uses propulsive rock guitar, bubbling synths, computer-chatter electronics and ethereal atmospheres in an engaging, stripped-down manner to convey the emotions involved in the kids’ ultimate no-win sessions of survivor theory. O’Toole, Davis and Phillips have done a strong job of thematically constructing this academic holodeck, subtly triggering nightmare imagination with voices, melancholy chords and exotic percussion that evokes the broader Indonesian setting, as well as the mood of Hans Zimmer’s INCEPTION as well as the retro-pulse of Tangerine Dream. At turns disturbing, meditative and groovy, this musically philosophizing trio create a rhythmically engaging sound for the end of the world before the class change bell rings.

Click on the link to Purchase the AFTER THE DARK soundtrack

Article Source: Assignment X
Article:CD Review of  the AFTER THE DARK soundtrack