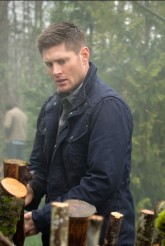 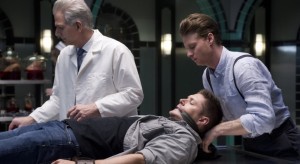 Most shows (barring those starring evil vampires) don’t let their lead characters go where Dean Winchester (Jensen Ackles) winds up in “The Prisoner.” Actually, this is arguably the darkest SUPERNATURAL has gone with either Winchester – yes, Castiel (Misha Collins) has gone darker, but he was a deity at the time, and Crowley (Mark A. Sheppard) is the King of Hell, so we expect him to do bad things. However, having Dean commit murder in less than hot blood is quite a turn – and it works dramatically, rather than simply being an excuse for hand-wringing.

“The Prisoner” begins not with the Winchesters, but at Styne Hall (yes, named for the nefarious family) at a university in Shreveport, Louisiana, where student Cyrus Styne (Connor Pree) is trying to escape from his family. Cyrus is also being bullied by other students. Although he stands up for himself, he winds up in dire straits at the hands of a classmate. Good news: Cyrus is rescued by Eli Styne (Matt Bellefleur). Bad news: rescue includes Cyrus being taken back to Styne patriarch Monroe (Markus Flanagan), who forces his youngest son Cyrus to remove organs from his still-living tormentor. Eldon Styne (David Hoflin), who ripped his arm off to escape from the Winchesters, tells Monroe about the stash of magical paraphernalia at the Men of Letters headquarters.

In flashbacks, we see a guilt-stricken Sam (Jared Padalecki) and a guilt-stricken and furious Dean building a funeral pyre for the murdered Charlie. Dean blames Sam for Charlie’s death. Sam tells Dean, “You’re all I’ve got.” Deans heads out to kill the Stynes

Castiel tries to wrangle Rowena (Ruth Connell), who is as exasperating as ever. Cass is very upset that Dean knows that Cass, Sam and Charlie lied in order to try to save Dean from the Mark of Cain. Sam gets Charlie’s email with the translation of the codex, which means that Rowena can now translate the cure for the Mark that Dean bears, so Sam sends Cass off to protect Dean.

Then Rowena refuses to translate the spell until Sam kills her son Crowley. Sam calls Crowley, pretending to be Dean in distress. Crowley shows up and Sam pulls out his dagger and the hex bag given to him by Rowena. Sam verbally blasts Crowley, blaming him for everything. Crowley did, after all, set Dean on the path that led him to acquiring the Mark of Cain.

Crowley tries to reason with Sam. When this doesn’t work, Crowley develops glowing red cat eyes and pitches Sam through the window. Crowley then tells Sam that, from this point on, Sam is only alive because Crowley is allowing it.

Big points to Crowley, who turns out not to be the chump he’s seemed for much of this season. Sheppard in this role is way too much fun to lose.

Sam returns to Rowena to say that her hex bag failed and Crowley is well and truly angry. Rowena finally starts to worry.

Dean goes to the Styne mansion, where he kills one guard, then finds himself surrounded. Monroe gets Dean on the operating table, but Dean breaks free, then kills Monroe and quite a few others.

Eldon and Cyrus are at the Men of Letters headquarters. Eldon wants to burn everything except what they’ve been specifically ordered to steal, but Cyrus is in favor of preserving the books (and is reluctant to destroy anything). Dean enters, fights with Eldon and kills him. Cyrus begs for his life, but Dean shoots him anyway.

And whoa. Dean killing people like Monroe and Eldon is one thing. Even without their additional body parts, the older Stynes are monsters who prey on the innocent. Cyrus has been forced to kill, once, with his own life forfeit if he didn’t act. Dean doesn’t know that Cyrus has killed anyone and he can see that Cyrus is very young. He’s crossing the line here. Ackles plays it like Dean knows he is facing his own damnation with no surprise – he’s matter-of-factly giving in to it. It is smart and clear-eyed and entirely in keeping with the Season 10 trajectory.

Castiel arrives just after Dean kills Cyrus. Castiel says he doesn’t want to watch Dean become a murderer. Dean beats the crap out of Castiel and barely stops himself from stabbing Cass with the angel blade.

With Dean just about ready to kill people he loves, something big is about to break. “The Prisoner” keeps us invested in what will happen, and at the same time revs up some sympathy for the devil, or at least for Crowley as his surrogate.