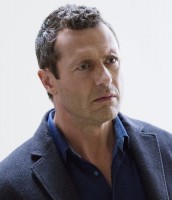 The actor also talks about his TV journey through numerous shows 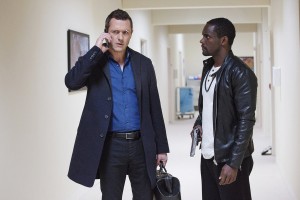 In USA’s COMPLICATIONS, Thursdays at 9 PM, Jason O’Mara plays ER doctor John Ellison. The premise of the Matt Nix-created series hinges on what happens when John violently intervenes in a drive-by shooting to save the life of a little boy. Turns out the child is the son of a grateful gang lord, a situation that pulls the reluctant John into the city’s underworld.

O’Mara, a native of Dublin, Ireland, has done a lot of work in U.S. film and television. He was part of the BAND OF BROTHERS ensemble, and starred in IN JUSTICE as a lawyer and the U.S. remake of LIFE ON MARS as a cop. Having a role as a doctor in COMPLICATIONS, O’Mara quips, “means I have played the TV trifecta.” He’s also played a time-traveling rebel in TERRA NOVA, a Sixties-era deputy sheriff in VEGAS, George Washington in this year’s SONS OF LIBERTY miniseries, and voiced Batman in the animated SON OF BATMAN and BATMAN VS. ROBIN.

AX: Playing a doctor, do you have any experience with the medical profession?

JASON O’MARA: Zero. But my grandfather, who I was very close to, he was a doctor, he had his own practice in Manchester in the U.K. He was also a doctor in the Eighth Army in World War II. So he would have great stories, and so we’ve always had doctors in the family, but I’ve never had any personal experience. I managed my son’s [school] rugby team, so the most kind of doctoring I did was pouring water on a bruised knee. That’s about as close as I got.

AX: Did COMPLICATIONS change your opinion of doctors at all?

O’MARA: No, I always knew they were hard-working.

AX: Most doctors – most people, for that matter – never find themselves in John’s position with having to make decisions in the middle of a shootout, but some doctors don’t even want to intervene when there’s a traffic accident for fear of being sued later on …

O’MARA: Right. But I don’t think John would be that guy. I think somehow, he feels like, at least now, he feels like he needs to effect some positive change on the world for him to want to live in it.

AX: Would you be interested in going to medical school, if you had the time?

JASON O’MARA: I actually wanted to be a doctor. I did not have the academic focus, let’s say, to get the points I needed to get into medical school. So then I thought, “Well, maybe I’ll do science, because that’s kind of like [medicine].” And then I did the school play, THE MERCHANT OF VENICE – true story – and I got off-stage and I said, “This is what I want to do.” So I did four years of drama school instead of seven years of medical school [laughs]. I am glad, as it turns out. But I’ve always wanted to play a doctor. And not just as a guest spot. Like a doctor in a regular role, a complex role.

AX: Do we see a lot of your character working in the hospital?

O’MARA: There were about three episodes on the trot where we weren’t in the hospital at all, and we were worried that the network were going to call, like, “We have built this million-dollar hospital set, and you guys haven’t been there for three episodes. Is there any chance you can use it a little?” But there is a gang shooting on a much bigger scale later in the series, and of course, where do the victims of the shootings go but the hospital? John gets a phone call and he has to go in and literally play triage with some of these guys – some of these guys he knows. The gang task force cop is there, he can’t reveal that he knows these people, and so even when we’re in the hospital, the story of the underworld is still playing out.

AX: How are the medical scenes to play?

O’MARA: It’s really hard. I don’t know if people say it’s easy, if other actors have said it’s easy or hard, but actually really hard, mostly because of remembering those medical terms while you are dispensing a hypodermic needle, one of which is real, for getting the fluid out, and the other one is a dummy, which will actually go into your arm – it’s retractable. So you’ve got props guys coming in halfway through the scene, handing you, switching out needles, and you’re trying to deliver [dialogue] and there’s emotion behind it. Those three things, when you don’t have a lot of rehearsal time, are really, really difficult [laughs].

At the same time, there is something gratifying when you can sell [the idea of being a doctor]. We had a medical advisor called Sunshine, and after a take, she said, “I totally bought that. You looked like a doctor. Jessica [Szohr as Gretchen Polk] looked like a nurse. Great work.” You go, “Yes! When they cut this together, I’m going to look like a doctor.” And I really am not.

AX: Can you talk a little about playing George Washington in SONS OF LIBERTY? Did you do any research for that?

O’MARA: I read this fantastic book called WASHINGTON: A LIFE by Ron Chernow. It’s really good, probably the best biography I’ve read on Washington. It shows him in quite an ambitious light, why he marries Martha, money, whatever, but a man who really learned success through failure. Often, he’s painted as a guy who could do no wrong from the beginning. And so I really wanted to play a flawed human being. I didn’t have a huge amount of leeway to do that, but that’s what I wanted to try to bring to him. It was great fun. Two hours in the makeup chair, and the wig.

AX: Do you feel like COMPLICATIONS is a little more in the wheelhouse of the USA Network than a few of your other previous series were at their respective networks?

O’MARA: Is it, though? Is it in the wheelhouse? My first concern was, if USA remain “the blue sky network,” they’ll never pick up COMPLICATIONS. And now they’re saying they want to go a little edgier and grittier, and so COMPLICATIONS is part of this next generation of drama. So at the time, we were taking a risk, because it does not read like BURN NOTICE or COVERT AFFAIRS.

AX: At least there are other dramas with police and doctors, living in the here-and-now, on the air. LIFE ON MARS was the only known series where a police detective time-traveled back to the 1970s …

O’MARA: I did time travel twice. Like once wasn’t enough?

AX: And then you did dinosaurs in TERRA NOVA, which was also unusual …

AX: So are you relieved to be working in the present at present?

AX: If this isn’t too spoilery, does John gain the affection of the rival gang when he starts treating them in the hospital?

O’MARA: Put it this way – if he does develop a relationship, however tenuous, with Chris Chalk’s character Darius, who works for this African-American gang, what’s the Hispanic gang going to think? They’re going to think he’s in cahoots, when he’s not. He’s just trying to dig himself out of an ever-deepening crisis. So it’s really interesting the way things develop. For every problem he solves, another one pops up. I won’t say he gains their affection, because that wouldn’t be true, but there are other characters introduced that present interesting and complicated relationship dynamics. Chris Chalk, first of all, he’s really, really good in it, and second of all, like everything in the show, it’s all a gray area morally, and the villains aren’t necessarily the bad guys and the heroes aren’t necessarily the good guys, episode to episode. Matt [Nix] does a great job of keeping that interesting

AX: You’ve worked with guns in the past. Did you through any kind of training for COMPLICATIONS?

O’MARA: I didn’t want to go through much training, because all he has is his set of skills as a doctor. And so most of the time, he doesn’t get to use those, because he’s outside of his comfort zone, he’s out in the world, he’s on the streets, he’s in the ghetto. So I wanted him to be learning as he went. I mean, the doctor stuff, you literally need to be told what to do [on set], depending on what that certain task is. I can’t go and do seven years of medical school [laughs] – I’m too old.

I didn’t want to learn too much about the guns, because he’s not a cop. And I had to unlearn everything I’d learned. When he picked up a gun, I didn’t want him to look like he knew what he was doing. A cop holds a gun kind of like this – there’s a certain amount of training and it comes up and it comes down, your eyes go where the gun goes. But John just picks up the gun with one hand and just fires. He doesn’t really know what he’s doing. So that was kind of interesting. I had to unlearn all the ride-alongs I’d done with cops and FBI and other stuff.

AX: With all the different kinds of things you’ve learned for all of your very different characters, do you have a special way of dealing with memories of all that information? Do you just keep it in the back of your mind?

O’MARA: Yeah, And you kind of accumulate stuff, and you end up knowing a little about a lot. I’m no expert on anything, but I can bore you to death with my own take on everything [laughs].