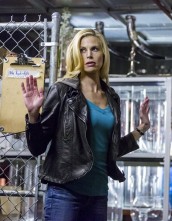 Brooke Burns on THE GOURMET DETECTIVE: A HEALTHY PLACE TO DIE – Exclusive Interview 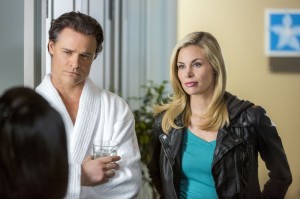 Burns, a Texas native, continues to host Game Show Network’s THE CHASE, where Mark Labbett, an Englishman nicknamed the Beast, does his best to stump contestants with multiple choice questions. During a party thrown by Crown Media for the Hallmark Networks and the Television Critics Association press tour at a Beverly Hills estate, Burns talks about the mysteries, the game show and more.

ASSIGNMENT X: Which number in the GOURMET DETECTIVE series is A HEALTHY PLACE TO DIE?

BROOKE BURNS: This is number two. We shot this one all at Bear Mountain, at the resort. We actually lived there and shot there the entire time, which was great, because we never had long travel times to the set.

AX: How many GOURMET DETECTIVES are there?

BURNS: There are nine books in the series, and I’m hoping that we’ll be making nine films.

AX: Assuming you’re all still friends at the end of that, might it go to series?

BURNS: [laughs] Exactly. I have a feeling that if Hallmark decides to continue to pick them up, which I think they will, that it could definitely turn into a series, because Dylan and I have a wonderful time working together and I actually don’t foresee us breaking up, if you will, somewhere down the line. He’s wonderful to work with.

AX: How is it returning to the character of Maggie?

BURNS: You know, she’s such a fun character to play, I’ve always said from the beginning, Dylan and Becky put this character in, because she’s not actually in the original book series. And they’ve just done such a wonderful job of making her a strong female character. She’s sassy and smart and sarcastic, and she’s a blast to play.

AX: And how is THE CHASE going?

BURNS: Our fourth season, Part B, started airing I think this week.

AX: Are you having any more celebrity guests?

BURNS: We are. We’re doing two celebrity shows this season, which were really a great time, but we also have been doing more theme shows, where we have three brothers who come on to play, we did an all-Texas show, which was great.

AX: All the contestants were Texans or all the questions were about Texas?

BURNS: No, three Texans. So it was sort of like Texas versus the U.K., with Beastie there, of course [laughs].

AX: What’s the most interesting thing you’ve learned on THE CHASE?

BURNS: Oh, my God. There are so many things that I’ve learned on that show. But I love that people always ask me, “Do you retain all of that?” I’m like, “Really? Do you know how many questions I read per day? Thousands. No, I don’t retain them. If I did, I would be the Beast.” [laughs] One of my favorites, because I’ve always been a lover of Mother Teresa and I’ve studied her work and I’ve followed her life and I’ve read her books – I’ve done this whole study on her – and one of the questions that we asked one day was, “What is Mother Teresa’s first name?” And you would think, “Isn’t it Teresa?” But it’s not. Her first name is Agnes. And I was like, “How do I not know that? I’m ashamed of myself.” But there are a lot of people who don’t. But that’s what I love about this show. You definitely come away from it [having learned something new], whether it’s something silly or something historical or whatever, and I’m always blown away by how much Beastie knows.

BURNS: Right now, I’m really focusing on doing some volunteer work with Life Goes On, because this is my ten-year anniversary of breaking my neck, so I’m doing a lot of spinal cord work this year, and we have a big fundraiser coming up called Night by the Ocean on September 20. So I’m really concentrating on that and obviously doing press for GOURMET and THE CHASE.

AX: How long did it take you to recover from that injury?

BURNS: Still recovering! No, I lost almost an inch in height, I was in a collar for five months and it was really about bone growth. I was very fortunate to be able to walk again, and there wasn’t a lot of rehab involved, just mostly healing and, thank God, I’ve got a lot of my mobility back, so very fortunate.

AX: What would you most like people to know about GOURMET DETECTIVE: A HEALTHY PLACE TO DIE?

BURNS: That the chemistry and the fun that comes across on screen is genuine and real, and that truly is what’s happening there, so I hope that they have as much fun watching it as we do making it.